Could you fall for a home with autumn views?

There’s a rousing whiff of Autumn in the air, which means landscapes across Europe are about to burst into colour. We pick some rural destinations where each year homeowners are treated to glorious autumnal countryside… 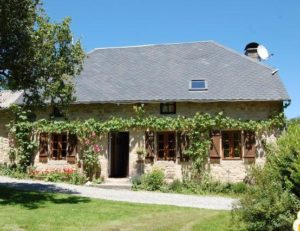 Millevaches Plateau, FRANCE
A land of ancient forests, rivers and lakes, peatlands and meadows, the 3,000-square-kilometre Millevaches Plateau is the centrepiece of the Millevaches Regional Nature Park in the heart of the Limousin.
Its diverse, lush countryside explodes into a picture of reds and browns when the fresher autumnal months arrive.

You’re spoilt for choice for pretty places to visit or walk there, but trails around the lakes of Oussines, Chammet, Bariousses and landmark Vassivière are especially popular. Properties in the sleepy farming villages and small towns are what most buyers opt for, in particular old character homes built from the local stone and with a garden. Areas worth exploring include Tarnac, Treignac, Eymoutiers, Meymac, Felletin and Peyrat-le-Château.

Or try these: Other areas of France where autumn is especially picturesque include the wild regions of Auvergne and Aveyron, the Lake Annecy area and Champagne, with its rolling vineyards. 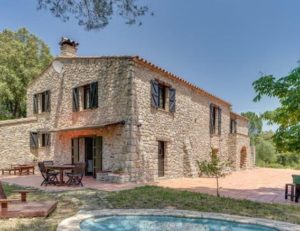 La Garrotxa, CATALONIA
A few miles inland of the northern Costa Brava, stretching north-west from the edge of Girona to the Pyrenees and French border is the enchanting area of La Garrotxa. Much of La Garrotxa is volcanic and either part of a natural park or declared an area of natural interest. The terrain there ranges from green and undulating, as it follows the rounded tops of volcanoes, to more dramatic with gorges and towering bluffs. It’s home also to some of the thickest and most extensive forests in Catalonia, with holm oaks, oaks, and beeches especially abundant – making autumn a particularly attractive time of year.

Complementing its natural landscape are medieval villages and towns, typically situated in stunning locations in a valley, on an outcrop or at the foot of mountains. Places not to miss include Besalú, Sant Esteve d’en Bas in the Bas Valley, Riudaura, Castellfollit de la Roca, and Santa Pau.

Or try these: Other areas of Spain where autumn never disappoints include the Costa Verde (Green Coast), which includes the lush north-west regions of Galicia, Asturias and Cantabria, and the Orba and Jalón Valleys in the northern Costa Blanca. 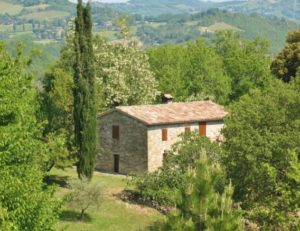 Umbria, ITALY
Nicknamed the ‘green heart of Italy’, Umbria’s countryside switches to even more exciting colours with the onset of autumn. It’s a land-locked region of gentle hills, winding valleys and plains that extends along the central basin of the Tiber river.

As such, autumn triggers a stunning transformation of its rolling vineyards and wooded slopes into a patchwork of reds, browns and yellows – even better when enjoyed from the terrace or living room window of your own home. Italophiles in search of a rustic character home that embraces Italy’s rich culture should prepare to be wowed by Umbria. It has pretty much all the qualities of Tuscany and few places anywhere can match it for picture-perfect hilltop towns, most famously Perugia, Assisi, Gubbio, Bevagna, Spello and Todi.

Or try these: The Chianti area of Tuscany, a land of rolling vineyards, and the Italian Lakes in the north are equally glorious places to be in the later months of the year.