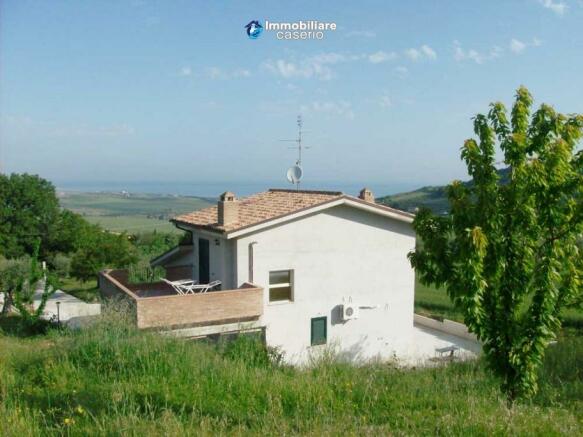 Lovely villa of 160sqm recently built in Petacciato, Campobasso, Molise. The property avails of 5.200sqm of land with 25 olive trees and fruit trees. The villa is two-storied as follows: at the ground floor you will find a spacious living room with kitchen, two bathrooms, a bedroom, a tavern with fireplace and a patio. At the first floor you will find two bedrooms, a bathroom, two terraces and two handy storage rooms. At the outside you will find an ample site where you can realize a wood roofing and a garden of 1500sqm with a well. Here it is possible to realize a swimming pool. From the house you have a wonderful view of the sea and the surrounding hills. Distances: 600m from the village, 4km from the sea, 13km from Termoli, 22km from Vasto, 98km from Pescara. Molise is bordered by Abruzzo to the north, Apulia to the east, Lazio to the west and Campania to the south. It has a short coastline to the northeast, lying on the Adriatic Sea. The cuisine of Molise is similar to the cuisine of Abruzzo, though there are some differences in the dishes and ingredients. The flavors of Molise are dominated by the many aromatic herbs that grow there. Some of the characteristic foods include spicy salami, a variety of locally produced cheeses, dishes using lamb or goat, pasta dishes with hearty sauces, and vegetables that grow in the region.

The Town
Petacciato is a town of 3,488 inhabitants in the province of Campobasso. Center of the Adriatic coast, stands on a hill 225 m above sea level. From its dominant position offers a vast and impressive panorama that stretches from the mountains of Maiella to the Gargano promontory, crossing the archipelago of the Tremiti Islands. Its territory is spread over an area of ??2,968 hectares.
The history of Petacciato is very old but at the same time uncertain because you have a documentation partially dubious about its origin and name.
The territory of Petacciato has always been fought over by various peoples and robbers. It suffered the assaults of the Goths (V century), Byzantines (sixth century), the Lombards (VII century). Petacciato in its millennial history, as can be inferred from this brief escursus, we can define a "young", if one takes into account the fact that it became a municipality only December 30th of 1923, away from Guglionesi.
Curiosity: After nearly 60 years in Petacciato was evoked the famous procession of San Martino called by many as the party of the" horned". Decreed a great success for the event-based wine and tarallucci throughout the procession route. Many participants, with a bevy of would-branched with his head.

Located in a beautiful spot in the South of Abruzzo, Vasto Marina, by the sea, offers a large portfolio of proposals, from the stone or bricks houses located in the typical villages, to country houses in mountains or sunny hills or close golden beaches of the Adriatic coast.

We love the beauty and the culture of our amazing regions: we focus mostly to Abruzzo and Molise (where prices are very competitive) and we are proud to introduce this unspoiled area that can offer you good food, tradition and kindly people.

Our goal is to provide an outstanding services including:

This is a property advertisement provided and maintained by Immobiliare Caserio, Vasto Marina (reference 22309) and does not constitute property particulars. Whilst we require advertisers to act with best practice and provide accurate information, we can only publish advertisements in good faith and have not verified any claims or statements or inspected any of the properties, locations or opportunities promoted. Rightmove does not own or control and is not responsible for the properties, opportunities, website content, products or services provided or promoted by third parties and makes no warranties or representations as to the accuracy, completeness, legality, performance or suitability of any of the foregoing. We therefore accept no liability arising from any reliance made by any reader or person to whom this information is made available to. You must perform your own research and seek independent professional advice before making any decision to purchase or invest in overseas property.

Viale Dalmazia, 3 66054 Vasto Marina Chieti
More properties from this agent
Request Details
or call 03339 395673
Calling from outside the UK? 00390873801202
Save Property
Add Notes
Please sign in or create an account to add notes
Print
Send to Friend