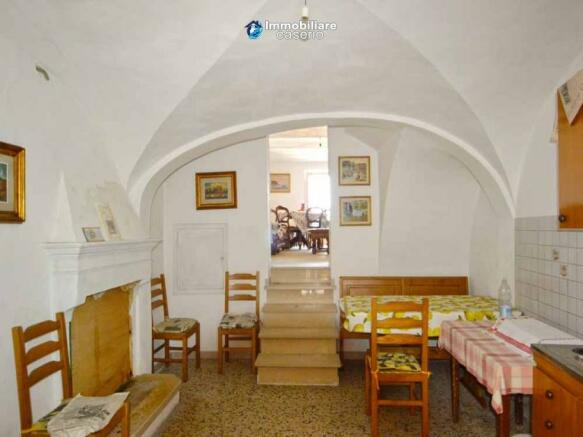 Two-story house for a total of 80 sq m located in Tufillo, Abruzzo. In the basement there is a stone cellar of 30 sq m. On the ground floor there is a kitchen with a fireplace and a small set of stairs that lead us to the room that has a balcony. On the first floor there are two bedrooms and a bathroom. The services available are water, electricity and gas. Distances: 28km from the beach of San Salvo Marina, 73km from the nearest ski slopes (Capracotta) and 109km from Pescara airport.

Tufillo overlooks on a rocky spur one of the wildest land strip of the Trigno River valley. The village developed during the 12th-13th centuries and still preserves many original elements in the houses-walls and houses-towers ruins. According to a legend, the ancient village was situated on the Mount Farano and an invasion of huge ants forced the inhabitants to leave their houses and re-build them further down. In fact, on the Mount Farano the ruins of an ancient settlement rose around a 3rd-2nd century shrine really exist, and they have been investigated by archeologists during the last years. Among the finds, a bronze key with an Oscan inscription dedicated to the Goddess Herentas, an italic divinity comparable to the Greek Aphrodite, stands out. The archaeological excavations can be admired in a permanent exhibition entitled "Cercando Herentas", hosted in the "Casa di Herentas". This is the highest part of the village, where also the Church of Santa Giusta is situated, built in 1758 and connected to the marquis Bassano Palace through a corridor, since it has been adopted by the nobles as a palatine chapel. On the 11th of August the "cavatelli" Festival takes place. This is a typical dish of Tufillo, a kind of handmade pasta seasoned with a local sausage sauce.

Located in a beautiful spot in the South of Abruzzo, Vasto Marina, by the sea, offers a large portfolio of proposals, from the stone or bricks houses located in the typical villages, to country houses in mountains or sunny hills or close golden beaches of the Adriatic coast.

We love the beauty and the culture of our amazing regions: we focus mostly to Abruzzo and Molise (where prices are very competitive) and we are proud to introduce this unspoiled area that can offer you good food, tradition and kindly people.

Our goal is to provide an outstanding services including:

This is a property advertisement provided and maintained by Immobiliare Caserio, Vasto Marina (reference 22441) and does not constitute property particulars. Whilst we require advertisers to act with best practice and provide accurate information, we can only publish advertisements in good faith and have not verified any claims or statements or inspected any of the properties, locations or opportunities promoted. Rightmove does not own or control and is not responsible for the properties, opportunities, website content, products or services provided or promoted by third parties and makes no warranties or representations as to the accuracy, completeness, legality, performance or suitability of any of the foregoing. We therefore accept no liability arising from any reliance made by any reader or person to whom this information is made available to. You must perform your own research and seek independent professional advice before making any decision to purchase or invest in overseas property.

Viale Dalmazia, 3 66054 Vasto Marina Chieti
More properties from this agent
Request Details
or call 03339 395673
Calling from outside the UK? 00390873801202
Save Property
Add Notes
Please sign in or create an account to add notes
Print
Send to Friend