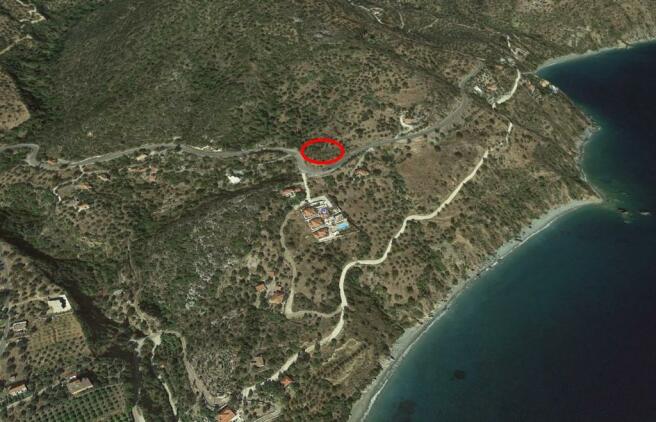 Land plot with panoramic sea views in an unspoiled area.

FURTHER INFORMATION
This land plot is situated on the beautiful eastern cost of Peloponnese, in the prefecture of Arcadia. The property is situated in a quiet part, a treasure of calmness. The amphitheatrical terrain will offer privacy as well as a great sea and mountain views. According to current regulations, a villa of 300 sqm could be built.

LOCATION
Arcadia stands in the centre of the Peloponnese and is a closed land, all mountains and high peaks with large fir forests and lush vegetation. An unspoiled land, little known, full of surprises, truly enchanting. On the eastern coast it is washed by the gulf of Argos and the Mirtoo Sea where it has curved fantastic bays and peninsulas on the coastline. Whoever roams through Arcadia today will get to know a part of the country that has remained virtually unchanged for thousands of years. The home town of the development, Leonidio, is one of the oldest naval cities in Greece. The valley of Leonidio in ancient times was known as the “Garden of Dionysus” a fact that connects the worship of god Dionysus with the cultivation of vineyards. The new town was founded in 1826, after the destruction of the city of Prastos by the Ottoman Empire. Leonidio boasts for its special and globally protected type of eggplant (the Tsakonian) which also donates its name to the local Eggplant Festival – Melitzazz.

DIRECTIONS
200 m from the seashore

Savills plc is a leading international property services company with a full listing on the London Stock Exchange. The company has undergone dynamic growth in recent years establishing itself as a powerful player on the international stage with offices and associates throughout the UK, Europe, Asia Pacific and the US.

Savills Hellas Ltd. is one of the leading property services company in Greece. As of 1st May 1997, the Company is a full member of the Savills International Network. Savills Hellas Ltd. has undergone dynamic growth in previous years establishing itself as a powerful player on the local and regional property scene. Savills Hellas advises clients on commercial, residential, hotel and leisure properties. The team of the Greek office provides advice and support to help companies and investors to maximise the benefits and efficiency of their property investment.
We have extensive knowledge of both Greek and Balkan real estate issues coupled with advisory and implementation skills. Our services are focused on valuation and advisory services of all types of properties including residential properties (first and second homes), hotels, theme parks etc.

This is a property advertisement provided and maintained by Savills Hellas Ltd, Greece (reference 2309) and does not constitute property particulars. Whilst we require advertisers to act with best practice and provide accurate information, we can only publish advertisements in good faith and have not verified any claims or statements or inspected any of the properties, locations or opportunities promoted. Rightmove does not own or control and is not responsible for the properties, opportunities, website content, products or services provided or promoted by third parties and makes no warranties or representations as to the accuracy, completeness, legality, performance or suitability of any of the foregoing. We therefore accept no liability arising from any reliance made by any reader or person to whom this information is made available to. You must perform your own research and seek independent professional advice before making any decision to purchase or invest in overseas property.

Savills, 64 Louise Riencourt Str., Athens, Greece
More properties from this agent
Request Details
or call 03339 396012
Calling from outside the UK? 00302106996311
Save Property
Add Notes
Please sign in or create an account to add notes
Print
Send to Friend

Learn everything you need to know to successfully find and buy a property in Greece.