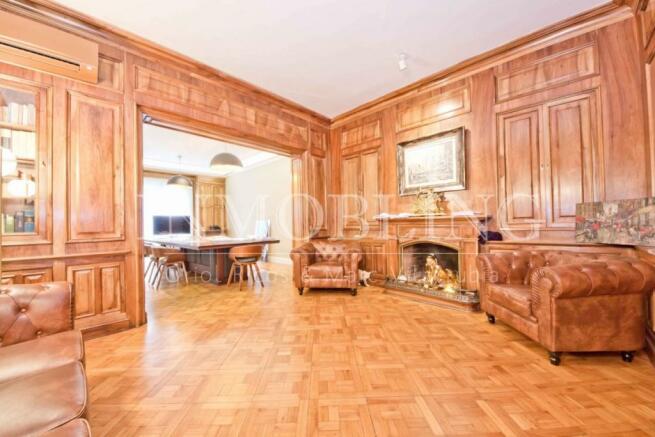 Stately apartment in the City of Barcelona (Sant Gervasi).
If a stately area has the city of Barcelona, ¿¿it is undoubtedly that of Sarrià Sant Gervasi. In the 50s, when this building was built, this type of architecture was the one that chose most of the Catalan bourgeoisie to install their usual residence.
The tranquillity, the views and a homogeneous environment of high-class homes were decisive factors for the choice of this emblematic area. These were farms of pure luxury. Even today, this is still the chosen area of ¿¿the most prestigious businessmen in the city. Not only because of the surroundings of beautiful centennial farms, also the services and transportation that we find in the Bonanova area or the proximity to the most prestigious schools in the city. All these factors continue to position this area as the "top" of the city.
In terms of marketing, many farms in the area are advertised as stately, although few of them are still considered as such today. One of the main advantages of this house is that it is consistent with the farm of which it is part. In the area there are other large houses and also some renovated, although most of them are not consistent with the building in which they are located, often in simple neighbourhood communities.
Today, these types of homes are still valued more than at that time. The change in family needs and the scarcity of building land in the city have made another type of design resurface: smaller spaces and suppression of some rooms that provide this extra quality to luxury homes.
In fact, many homes of this type have been divided to achieve smaller floors.
That is why this type of architecture, this type of housing, this stately charm, remains synonymous with exclusivity.
Some of these homes have been converted into law firms or notaries, precisely because of the stately architecture. It is the case of this house. It is currently inhabited by a professional office, although its original distribution has not been modified.
Entering the housing in question, the first thing that impresses is the farm itself, specifically the entrance to the building. You breathe exclusivity in every corner. A neat, clean estate with doorman, elevator, carpets, wooden walls... Great! And not only this, a farm with 2 unique neighbours per floor.
The apartment in question has more than 300 m2, in fact it is the largest in the estate. The architect in charge of the project opted for a logical and functional distribution that perfectly distinguishes the area from day to night. All with a straight-line design that provides even more feeling of spaciousness.
The first thing that attracts attention as soon as you access the floor is its long corridor, through which we access the different rooms.
- The day area, outside Muntaner Street, is composed of its large living room, its counter-lounge and the dining room itself, independent rooms through sliding doors, overlooking the city. In this same day area, we also find the independent and renovated kitchen with service area.
- Moving on to the night area, we find its 6 bedrooms: 2 of them doubles, 2 type suite with integrated dressing room and bathroom and 2 singles. In total it has 6 bedrooms and 4 bathrooms.
A large stately apartment with centuries-old architecture, but without sacrificing the comfort of current needs. In 2008, a comprehensive reform was carried out to update some of the elements, always respecting several original elements to preserve that characteristic essence of the era in which it was built.

Our strategy: only real estate that is worth it, only in those we would live. The budget or location is not what matters most to us, but have a special "something". If you have an INMOBLING style home, we will be happy to work with you. Our real success? Even if we have rented or sold a property, our clients will They remain with us, always attentive to all the news.

This is a property advertisement provided and maintained by Inmobling , Mataró (reference IBVP006Muntaner-3943) and does not constitute property particulars. Whilst we require advertisers to act with best practice and provide accurate information, we can only publish advertisements in good faith and have not verified any claims or statements or inspected any of the properties, locations or opportunities promoted. Rightmove does not own or control and is not responsible for the properties, opportunities, website content, products or services provided or promoted by third parties and makes no warranties or representations as to the accuracy, completeness, legality, performance or suitability of any of the foregoing. We therefore accept no liability arising from any reliance made by any reader or person to whom this information is made available to. You must perform your own research and seek independent professional advice before making any decision to purchase or invest in overseas property.

Calle Argentona, 34 Barcelona 08302
More properties from this agent
Request Details
or call 03339 396755
Calling from outside the UK? 0034937964643
Save Property
Add Notes
Please sign in or create an account to add notes
Print
Send to Friend