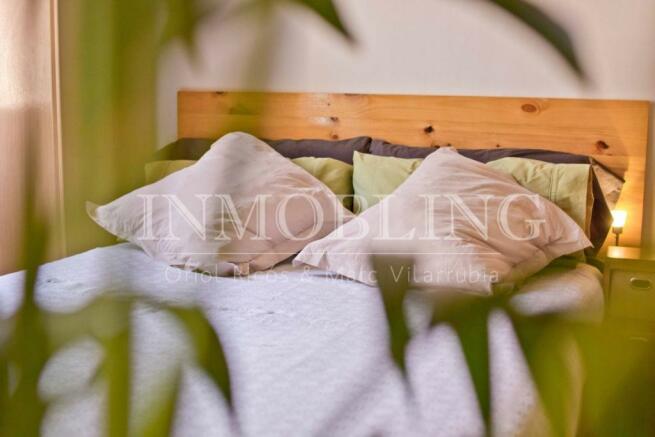 If a trendy neighbourhood has Barcelona, ¿¿it is undoubtedly that of Raval. Its location, right in the center, the services, the multicultural environment and, above all, the sensation of a century-old city that can be felt in any of its narrow streets ... The real Barcelona! The Barcelona visited by families from all over the world. It is easy to see tourists photographing these streets, these centuries-old facades, the stone streets ... This type of architecture so characteristic of Barcelona is not seen in other places.

As in all neighbourhoods, the Raval has more valued areas than others. The apartment we offer today is in the most demanded area, the area that touches the sea most. A few meters from the Baluard Gardens, between the Parallel Avenue and the Shipyards. It takes less than 10 minutes to reach La Rambla or Colón.

As for the floor, it is located on the 4th floor of one of the characteristic centenary buildings in the area. Although the property does not have an elevator, the stairs are direct and you can ascend in a moment.

If you are still here after seeing the 4th without elevator ... Great! You will love the rest.

This apartment has been the usual residence for more than 10 years of its current owner, indicating that here you can live well.
We start with its light, its height, its orientation to the sea and the fact that it has 2 large windows that face the street, which provides natural lighting and a spectacular direct Sun; more so considering that it is a 4th floor.

As for its interior distribution: like most homes of this era, at the beginning, it had several tiny rooms. In its last reform, it was decided to eliminate all the partitions (with the exception of the bathroom) to create a spectacular bright and open space. The result ... as if it were a hotel suite!

Currently, there is, in a single environment, the living room and bedroom. The kitchen, although American, is independent.

This distribution is easily modifiable. You can divide the bedroom in several ways: plasterboard, wood, screen or even with some curtains of thread.

The only room that is completely independent from the rest is the bathroom, equipped with a shower.

A nice apartment, look where you look! The combination between the renovation, the furniture, the chosen tones, the care taken by the owner, the open distribution and the natural light, provide a great feeling. Like when you arrive at a good hotel: you don't know why, but that combination makes you feel good ... Here, this is the same!

Having no divisions, it is easily adaptable. Look at the photos, we play with 2 different distributions. The owner told us, laughing, the great dinners with friends he has organized, removing the furniture from the living room and opening the extendable kitchen table.

A flat with personality, in the most valued area of ¿¿one of the most famous neighbourhoods of the city, in an exceptional state and lots of natural light.

The good thing is that you can enter to live now, without reforms, without investment. Install from day one and without initial investment.

Our strategy: only real estate that is worth it, only in those we would live. The budget or location is not what matters most to us, but have a special "something". If you have an INMOBLING style home, we will be happy to work with you. Our real success? Even if we have rented or sold a property, our clients will They remain with us, always attentive to all the news.

This is a property advertisement provided and maintained by Inmobling , Mataró (reference IBVP001SB-3943) and does not constitute property particulars. Whilst we require advertisers to act with best practice and provide accurate information, we can only publish advertisements in good faith and have not verified any claims or statements or inspected any of the properties, locations or opportunities promoted. Rightmove does not own or control and is not responsible for the properties, opportunities, website content, products or services provided or promoted by third parties and makes no warranties or representations as to the accuracy, completeness, legality, performance or suitability of any of the foregoing. We therefore accept no liability arising from any reliance made by any reader or person to whom this information is made available to. You must perform your own research and seek independent professional advice before making any decision to purchase or invest in overseas property.

Calle Argentona, 34 Barcelona 08302
More properties from this agent
Request Details
or call 03339 396755
Calling from outside the UK? 0034937964643
Save Property
Add Notes
Please sign in or create an account to add notes
Print
Send to Friend