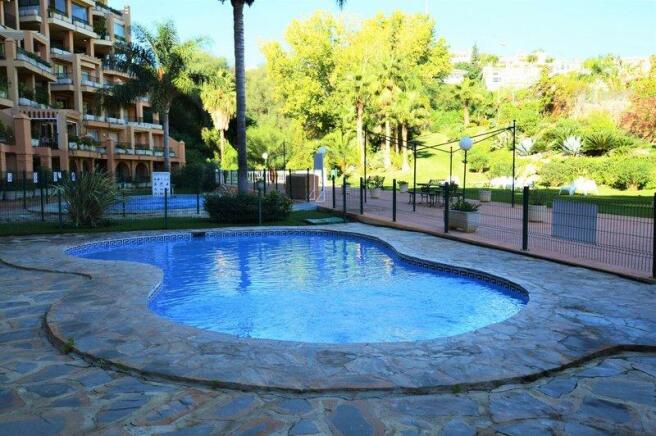 2 Bed penthouse apartment in sought after Lower Torreblanca with roof terrace. Minutes´ walk away from the train station, amenities and the beach


Great opportunity to purchase a 2 bed 2 bath top floor apartment in one of the most popular areas in Fuengirola for LESS than €200,000!!

This 2 bed apartment has 2 bathrooms (the master bedroom being en-suite), a good size lounge with dining area, an entrance hall and a fully equipped kitchen with generous storage and work tops. There is a south facing terrace running the whole length of the apartment with access from the lounge and also the master bedroom.
here a spiral staircase leads up to the private roof terrace which has mountain and partial sea views and offers all day sun.

The property, which is sold fully furnished, has been built to a high standard with ceramic floor tiles, hot and cold air conditioning throughout, built-in wardrobes, PVC windows and doors and ceiling fans. The apartment also comes with an underground parking space included in the price.

This urbanisation is really well maintained and offers 2 swimming pools and lots of mature garden with trees and shrubs which are immaculately manicured.


This is a fantastic property either as a holiday home or would lend itself perfectly for rental due to its proximity to public transport (including the train), shops, bars, restaurants and the beach.

The popular town of Fuengirola is minutes away, Benalmadena only a short drive and the airport less than 25 minutes.

Fuengirola is located just 25km west of Malaga and is easily accessible by road, bus or train and is a popular tourist and residential area. Fuengirola has a population of 75,953 inhabitants with an average yearly temperature of 18 degrees and an average yearly rainfall of 570mm. The main reasons for its popularity is its location and proximity to the resorts of Benalmadena and Torremolinos to the east and the resorts of Mijas Costa and Marbella to the west, just over 35km away. It also has 8km of coastline of which is mostly uninterrupted beaches of which there are 7, one being a blue flag beach. Fuengirola offers an array of shops, bars and restaurants as well as shopping and commercial centres. For entertainment there are multi-screen cinemas, a water park, naturalistic zoo, skateboard park, go-karting, water sports, boat trips, theatres, kids mini-park, historic castle, crazy golf and more to keep both the adults and the children occupied.

The areas of Los Boliches and Torreblanca are busy areas in their own right but offer a less fast pace of life. The high street and side streets in Los Boliches provides a gluttony of little bars, restaurants not only offering international drinks and cuisine but that of quality local produce and has its very own identity. Torreblanca is very frontline orientated but not to the extreme of its neighbouring areas where sitting out enjoying a drink or a meal looking out over the Mediterranean is a customary act. Both of these areas have a train station.

Benalmadena is located 19km west of Malaga International Airport and sits in between the coastal resorts of Torremolinos and Fuengirola. Its average rainfall per year is 610mm and has an average yearly temperature of 18 degress. It has a population of 65,965 inhabitants. Benalmadena is one of the more popular tourist destinations on the Costa del Sol and is split into 3 main areas. These are the traditional and original settlement of Benalmadena, Benalmadena Pueblo, the cosmopolitan town of Arroyo de la Miel and the various areas that make up 10km of coast line, (13 beaches of which 5 are blue flag) that is Benalmadena Costa.

Benalmadena Pueblo is situated in the foothills of the mountains and about 5km from the coast. Most areas of this village offer breath taking views of the Mediterranean from Fuengirola to Malaga. The village attracts many day visitors as it has managed to keep its traditional Spanish village look with white washed walls, narrow flower filled cobbled streets and small plazas (squares) where traditional Spanish café bars reside. Many visitors enjoy the tranquillity of the village taken in a real taste of Spanish life whilst enjoying local cuisine and tapas.

Arroyo de la Miel is a small but modern town that lies between the village and the coast and is the central point for Benalmadena’s local and foreign expat community to dine, be entertained and shop. It is also home to Benalmadenas train station that links the resort to Fuengirola and Malaga via the airport. The bus service is similar to that of the village with a few additional routes that go to the urbanisations along the Benalmadena coast. This has made Arroyo de la Miel a popular commuter town. Here you will also find Tivoli World theme park, the cable car which runs to the top of the mountain and Selwo Marina, one of a handful of places in Spain where you can swim with dolphins. You will also find the famous Paloma Park with its native rabbits, peacocks and chickens and the lake, which makes this a great day out for children and adults alike. There is also an auditorium where musical events are held.
Benalmadena costa has a numerous and varied selection of hotels that align the beach front, the main road and side streets of this popular tourist destination. The main area of Benalmadena Costa lies between the award winning marina and the area of Torrequebrada which is home to Benalmadena’s only casino.
Within this area there are plenty of restaurants, bars, clubs and entertainment venues that cater for many nationalities. There is also the marina, offering a range of boating and water activities, a Sealife Centre plus a plethora of bars and restaurants.

To view this property or request more details, contact
Your Dream Home , Cabopino-Malaga

About Your Dream Home , Cabopino-Malaga

Looking to buy a property in the Costa del Sol?

Then you will find everything you need to make your dream come true here. YourDreamHome are experts in residential property sales and property management on the Costa del Sol, in Southern Spain.

At Your Dream Home we are ideally positioned to help you find your Spanish property and ensure it is well looked after. Our team of property experts have years of experience in the Spanish real estate market and can offer you the best property advice and service which makes us one of the most experienced and well trusted Spanish property companies caring for all your needs in the Costa del Sol, Spain.

Our aim is to help you find your ideal home or property investment, whether you are looking to buy or to rent.

We make it easy to find your property in the Costa del Sol by giving you access to over 9000 resale properties to choose. From luxurious villas to townhouses, from studio apartments to penthouses.

Once you have purchased a property in the Costa del Sol, you can take advantage of hassle-free ownership with our property management services or earn money from Your Dream Home with our rental service.

Contact YourDreamHome today and speak to one of our consultants for Property Costa del Sol.

This is a property advertisement provided and maintained by Your Dream Home , Cabopino-Malaga (reference 198743_M376961D) and does not constitute property particulars. Whilst we require advertisers to act with best practice and provide accurate information, we can only publish advertisements in good faith and have not verified any claims or statements or inspected any of the properties, locations or opportunities promoted. Rightmove does not own or control and is not responsible for the properties, opportunities, website content, products or services provided or promoted by third parties and makes no warranties or representations as to the accuracy, completeness, legality, performance or suitability of any of the foregoing. We therefore accept no liability arising from any reliance made by any reader or person to whom this information is made available to. You must perform your own research and seek independent professional advice before making any decision to purchase or invest in overseas property.

Calle ramon y cajal no 23 Fuengirola Malaga Spain
More properties from this agent
Request Details
or call 03339 390740
Calling from outside the UK? 0034 952 475 715
Save Property
Add Notes
Please sign in or create an account to add notes
Print
Send to Friend