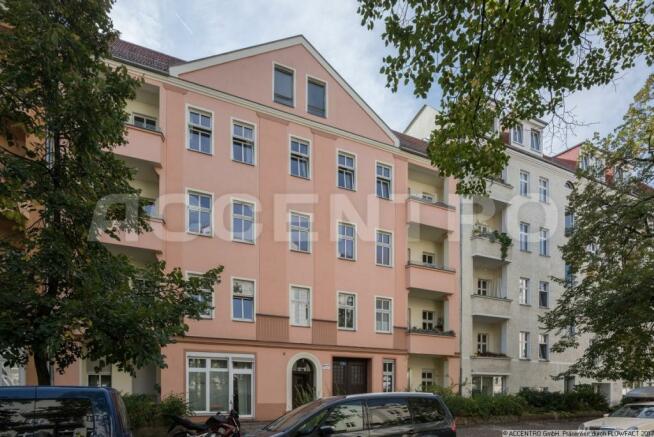 The own flat near Florakiez in Wilhelminian style old building

Pankow is a district in northern Berlin that, together with the districts of Prenzlauer Berg and Weissensee, belongs to the eponymous borough of Pankow. To this day, the green district with its enchanting blocks harks back to its past splendour of stately summer residences set inside sprawling parks. The people of Pankow appreciate the tranquillity and peacefulness of the area as much as the close proximity of the bubbly district of Prenzlauer Berg.

Pankow offers a wide variety of things to do. Choices include Berlin’s oldest street market on the historic village green of Pankow, the only nature protection area with a rich diversity of bird species in the inner city, a quiet lake shore of Fauler See or the banks of the River Panke after which the borough takes its name. Hiking alongside the narrow river will take you through several scenic park facilities, such as the Bürgerpark designed by LennÃ© or the grounds of Schönhausen Palace. The manor, which once served as summer residence of Queen Elisabeth Christine, wife of Frederick the Great, was also used as guest house of the East German government and seat of East Germany’s president. In the years following the country’s reunification, the palace was painstakingly restored and now houses a museum dedicated to its own turbulent history.

The Berlin-Usedom long-distance cycle route of 337 km branches from the Schönhausen palace grounds before heading out towards the Baltic Sea, passing through pristine nature landscapes en-route. Whenever you feel like leaving this quiet recreational ambience to experience the city’s cultural life, you will find a vibrant scene in nearby Prenzlauer Berg, e.g. at Kulturbrauerei, Prater or in any of the many cafÃ©s here. The Florakiez neighbourhood near Binzstrasse is another great destination for shopping and hanging out.

In the Kissingenviertel quarter south-east of the Florakiez neighbourhood, between Berliner Strasse and Neumannstrasse, lies the charming period building of Binzstrasse 20 on a quiet tree-lined residential street.

Built around 1910, the well-appointed multi-unit dwelling divides into a front building and a back building as well as the shared inner courtyard in between. Each of the ground floor flats comes with its own patio and a small garden section.

The period building welcomes its residents with a bright and friendly faÃ§ade accentuated by red highlights. All of the period features in the stairwell were painstakingly refurbished, with the details skilfully restored. Stucco images on the walls of the entrance area and curved hand rails lead elegantly to the flats.

From the ground floor all the up to the third floor, conveniently laid-out flats of 2 to 3 bedrooms with footprints from 63 to 97 square metres make for very cosy homes. The majority of flats feature either a loggia or a balcony that are the perfect place for taking it easy during the summer months. The flats have optimal floor plans, providing spacious and separately accessible rooms that make it easy to implement your personal interior decorating ideas. What all of the flats have in common is that bedrooms, bathroom and kitchen are situated directly off the hallway. The bathrooms get natural light while the kitchens offer ample space for cooking and spending time together.

The flats have been continuously upgraded. Most of the dwellings are in excellent repair and meet present-day standards, featuring double-glazed windows, new radiators as well as new electric and utility lines. 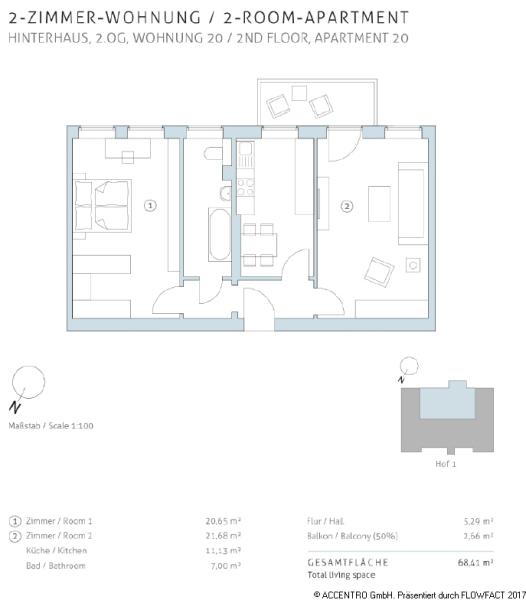 This is a property advertisement provided and maintained by Accentro GmbH, Berlin (reference 110674_16719381) and does not constitute property particulars. Whilst we require advertisers to act with best practice and provide accurate information, we can only publish advertisements in good faith and have not verified any claims or statements or inspected any of the properties, locations or opportunities promoted. Rightmove does not own or control and is not responsible for the properties, opportunities, website content, products or services provided or promoted by third parties and makes no warranties or representations as to the accuracy, completeness, legality, performance or suitability of any of the foregoing. We therefore accept no liability arising from any reliance made by any reader or person to whom this information is made available to. You must perform your own research and seek independent professional advice before making any decision to purchase or invest in overseas property.