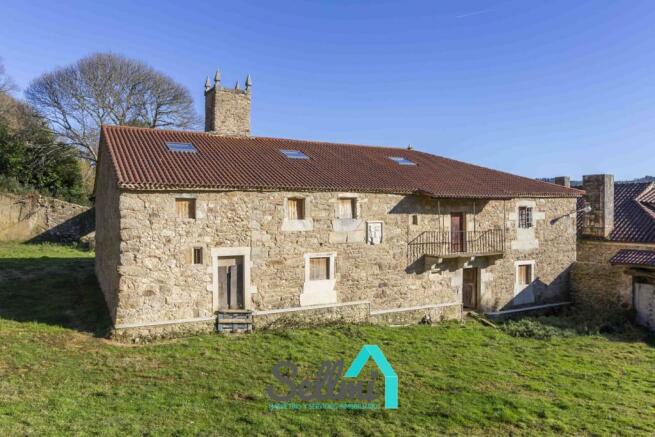 Pazo for sale in Toques, A Coruña (Spain)

Extraordinary pazo located in Toques, A Coruña. It is located near Melide and 50 kilometers from Santiago de Compostela Airport.
It belongs to a family of ancient Galician roots, with great influence in the region since the sixteenth century, due to their activity as scribes.
The house has a rectangular floor plan (solid building) and a structure with two heights and a lower deck. It has a roof with a four-waterfall in which there is a large chimney finished in baroque stonework pinnacles. It stands out for its originality in the area, the balcony over the main entrance.
Recent work has been carried out to fix the exterior façade and the roof. The interior, which needs to be restored, is divided into different rooms, the most outstanding of which is the room with a spectacular fireplace.
The pazo has different plots with a total of 40 hectares that can be sold in a segregated manner. Mountain areas, wood areas, pastures, etc. It also has springs that bring a lot of water to the pazo.
Located next to the limits of the pazo is the church of the parish of A Capela, in San Antolín de Toques, a Romanesque temple (12th century) of extraordinary interest, located in an impressive natural setting on the banks of the river da Toca formed by an impenetrable native forest.
On the other hand, about four kilometres from the pazo, a variant of the Pilgrim's Way to Santiago, "El Camino Primitivo" or "Camino de Oviedo", crosses the parishes of Vilouriz and Vilamor, and continues to Melide where it meets the "French Way". The "Primitive Way" is the branch of the way that from Asturias enters Galicia through the mountains of Fonsagrada (Lugo), and passing through Lugo capital, leaves the province of Lugo through the north of the town hall of Palas de Rei, introducing itself in Toques through the Parish of Vilouriz.
Due to its enormous historical value and its unbeatable location, this pazo is a very attractive investment for any hotel, leisure or wine activity.
Link to video:

Sellmi is a marketing and real estate services company, formed by a team of specialized professionals who look for real estate solutions so that people and companies invest or develop their activity in the best conditions

This is a property advertisement provided and maintained by Sellmi, London, UK (reference 18055) and does not constitute property particulars. Whilst we require advertisers to act with best practice and provide accurate information, we can only publish advertisements in good faith and have not verified any claims or statements or inspected any of the properties, locations or opportunities promoted. Rightmove does not own or control and is not responsible for the properties, opportunities, website content, products or services provided or promoted by third parties and makes no warranties or representations as to the accuracy, completeness, legality, performance or suitability of any of the foregoing. We therefore accept no liability arising from any reliance made by any reader or person to whom this information is made available to. You must perform your own research and seek independent professional advice before making any decision to purchase or invest in overseas property.