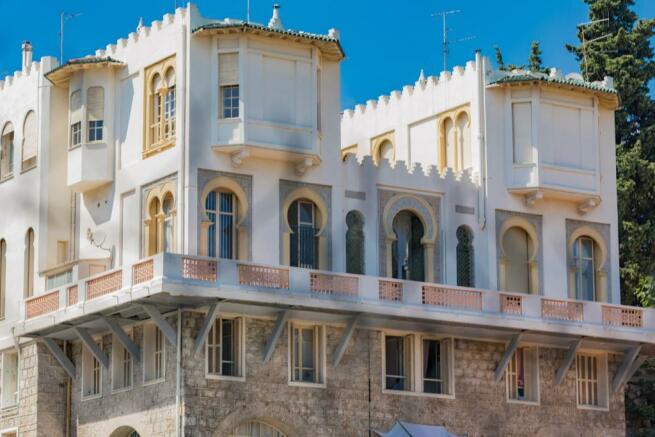 The VILLA EL PATIO, in the neo-Moorish Andalusian style, has been listed as a Historic Monument since 1 September 1999 and has been designated as a "Heritage of the 20th Century" since 1 March 2001.

The apartment consists of 6 rooms (two lots together), two or three bedrooms (one of which is currently operated as an office facing the church), an equipped kitchen, two bathrooms, a library lounge and above all this unique Andalusian patio with an open sky and frescos and a fountain.

A separate individual garage at the foot of the building, a cellar.

We are a fully registered Agent immobilier in France with our own Carte Professionelle but we act for the buyer rather than the seller. We work with all of the best selling agents, builders and private owners in France so that we can cover the whole property market. We do take properties for sale directly but unlike a traditional agent, we are not restricted to the properties on our books and we search the entire market for our clients.

Since the creation, our focus has been to offer the very best service we can for our clients. Our team of consultants are multi-lingual, they all have an in depth local knowledge and they are all experts on the French buying process.

The success we have experienced at HOMEHUNTS is due to our exceptionally high standards and our energetic and dedicated enthusiasm for achieving the best results for our clients. We endeavour to succeed in all aspects of the business, continually improving ourselves as we find more effective ways to increase our range of services. Our ultimate goal is to exceed our client's goals and expectations.

This is a property advertisement provided and maintained by Home Hunts SARL, French Riviera (reference 13257417) and does not constitute property particulars. Whilst we require advertisers to act with best practice and provide accurate information, we can only publish advertisements in good faith and have not verified any claims or statements or inspected any of the properties, locations or opportunities promoted. Rightmove does not own or control and is not responsible for the properties, opportunities, website content, products or services provided or promoted by third parties and makes no warranties or representations as to the accuracy, completeness, legality, performance or suitability of any of the foregoing. We therefore accept no liability arising from any reliance made by any reader or person to whom this information is made available to. You must perform your own research and seek independent professional advice before making any decision to purchase or invest in overseas property.

55 Rue St. Ferreol Marseille Bouches du Rhone 13001 France
More properties from this agent
Request Details
or call 03339 873525
Calling from outside the UK? 0033 970 446 643
Save Property
Add Notes
Please sign in or create an account to add notes
Print
Send to Friend