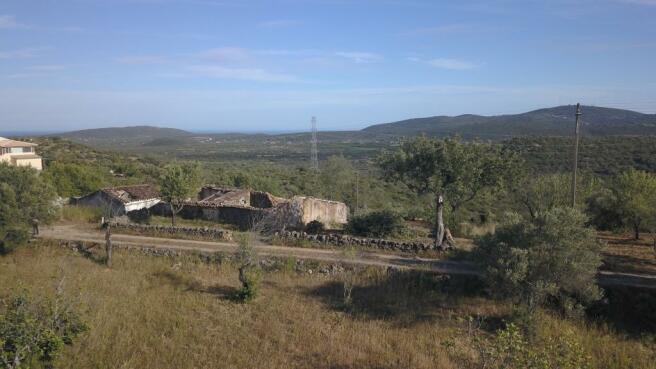 A south facing ruin for sale found in Santa Catarina da Fonte do Bispo, which is located between São Brás and Tavira in East Algarve.

Situated on a small mountain in a quiet area, this property offers both mountain and sea views. Comprised of 470m2, there is a possibility to build a brand new villa covering 300m2 including a basement and swimming pool. With water pipes, lights and telephone already installed, the design is completely up to you - providing a fantastic opportunity to get your hands stuck into a new project and style you home the way you want.

São Brás de Alportel is just a short six minute drive away which is where you can find all the local amenities including supermarkets, bars and restaurants. The stunning beaches of Tavira are slightly further away along with Ria Formosa Natural Park, both of which offer brilliant days out as well as a true Algarvian experience.

São Brás de Alportel was an ancient settlement in Roman times and later inhabited by the Moors, hence the Moorish influences across the buildings in the main town. Much of its wealth originated from cork production, being the biggest cork producing center in the country in the beginning of the 20th century, it was made into a municipality due to the little towns huge economic importance. Over the years cork production moved onto other areas in the country, leaving behind a reliant touristic base that encourages arts and crafts passed on from generation to generation.

At Ideal Homes International we specialise in assisting people like you in purchasing property overseas. With a combined understanding of the market of over 100 years, our team has an unrivalled knowledge, making us experts in the field when it comes to finding the right property for you.

Consistent and ever improving quality and service is at the forefront of our campaign for excellence in the customer service department.

Our objective is to deliver a service that far beyond exceeds expectations. Above all, we are a company that cares - about its people, about its effect, about its reputation, and about always offering and finding the ideal solution when it comes to buying property abroad.

The foundations of our company are firmly set giving all our future clients, working partners and staff the benefit of a rock solid base in which they can trust and believe in.

We are pleased to offer all our clients the opportunity to see their potential dream homes first hand with our tailor made Viewing Trips, in any of 4 beautiful locations, Portugal, Italy, Spain & Florida.

Return flights for two adults from an airport of your choice direct to chosen destination.

Accommodation in a luxury hotel (minimum 3 stars), including breakfast

Exclusive service; advice and guidance from one of our experienced Property Consultants

You will be shown the different areas and visit as complete range of properties as possible that are both in your price range and ones that you have expressed an interest in viewing.

Over the course of the trip when you make your decision on whether this is for you or not, we will explain all the details including total costs, annual costs, legal formalities, flight offers, furniture, letting potential, in fact everything for YOUR NEW HOME OVERSEAS.

For more information on viewing trips and why this is the best solution to finding your house in the sun feel free to call our offices where one of our friendly helpful members of staff will explain the whole process.

We are a fully licensed Real estate agency with Head offices in Vila Sol, Portugal:

What are you waiting for, we want to help turn your dream into a reality!

The team are looking forward to hearing from you!

This is a property advertisement provided and maintained by Ideal Homes International, Head Office (reference 98429_IDH31451) and does not constitute property particulars. Whilst we require advertisers to act with best practice and provide accurate information, we can only publish advertisements in good faith and have not verified any claims or statements or inspected any of the properties, locations or opportunities promoted. Rightmove does not own or control and is not responsible for the properties, opportunities, website content, products or services provided or promoted by third parties and makes no warranties or representations as to the accuracy, completeness, legality, performance or suitability of any of the foregoing. We therefore accept no liability arising from any reliance made by any reader or person to whom this information is made available to. You must perform your own research and seek independent professional advice before making any decision to purchase or invest in overseas property.