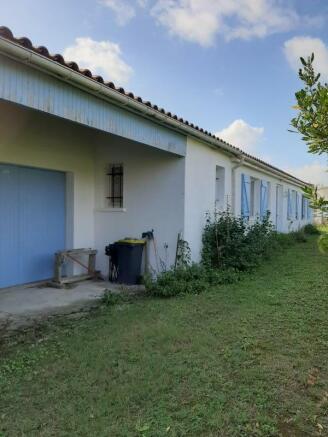 3 bedroom detached house in Mortagne-sur-Gironde set on 2056mÂ² of land with views on the rolling valley and walking distance to local shops, bar and restaurants set on its picturesque port. The property has a large open plan lounge of 43m Â² with a wood burner, a kitchen of 11m Â² 2 bedrooms on the ground floor of 11m Â², 10m Â² and 2 shower rooms of 9m Â² and 3m Â². There is a bedroom of 14m Â² on the first floor and a garage of 31m Â² with a mezzanine of 14m Â². The land streches for 130m and has lovely views over the rolling valley to the back of the house. This house is on the road to a dead end road. 20 mins from sandy beaches, 1 hour from Bordeaux. For more information contact Yiannis 6 or Denise 6 email

One Sunday morning in 1977, Ludovic GARÉCHÉ came to increase the population of Mortagne-sur-Gironde, and since that day, he never left.

He attended school at the village school and then obtained his various degrees in various fields such as management, accounting, and construction, including that of building study technician among the companions of duty.

He then turned to law studies to strengthen his legal knowledge.

He was able to prove his worth by first opening a Masonry / Roofing / Sanitation company, which allowed him to enrich his experience in building techniques.

But his initiative, his thirst for ambition and his sense of commerce led him to open his first real estate agency, on the port of Mortagne-sur-Gironde.

Seeing the ever-changing market, he opened a second agency in the town center of Mortagne-sur-Gironde and a third in Saint-Genis-de-Saintonge, on the main axis.

He is also very involved in the community of his hometown and its surroundings, through his position as deputy mayor but also through his investment in associative life for several years within the LIONS CLUB of Royan among others.

Ludovic GARÉCHÉ loves his region and strives to highlight it, his dynamism promises new projects to come ...

The city is divided into two distinct entities: the ancient city, camped on a cliff, is organized around its church and its local shops located along the main street, while the port below, is bordered by old mills. Some of the houses have been converted into bars, restaurants and shops, making this part of the city a must-see economic center in summer. A few meters away, stands a monolithic hermitage, dating back to the first centuries of the Christian era.

Since 2011, the commune has also belonged to the "Stone and Water Village" network, a label initiated by the General Council to promote exceptional sites with the particularity of being located at the edge of a stretch of water (sea, river , pond ...)

With its 75 km long and 12 km wide, the estuary of the Gironde, the largest and best preserved of major European estuaries, extends the Bec Ambès, where meet the Dordogne and the Garonne , at the Atlantic Ocean, between the Pointe du Verdon and Royan.

Straddling the departments of Gironde and Charente-Maritime, this natural area is an exceptional place, where the unspoilt nature gives it its wild character, and offers a mosaic of landscapes: enigmatic islands, hillsides planted with vineyards , marsh, mudflats and cliffs.

The commune of Saint-Genis-de-Saintonge is located in the south-west of the Charente-Maritime department , in the region of Aquitaine, in the old province of Saintonge . Established in the heart of the Charente countryside, near the forest of the Lande and not far from the banks of the estuary of the Gironde , this small city is one of the balancing poles of the canton of Pons .

Crossed by one of the most important arteries of the department, the D 137 , which drains daily a large traffic, it concentrates trade, services and some companies.

Saint-Genis houses adapted infrastructures in the field of education (schools, college), culture (media library, cinema) or health. The development of tourism, driven by projects in the area ( Port-Maubert site, Pôle nature Vitrezay , West Indies Jonzac ), is also due to the geographical situation of the town, close to the spa town of Jonzac , the medieval city of Pons and Royan and the beaches of the Côte de Beauté .

This is a property advertisement provided and maintained by LGIMMO, Mortagne sur Gironde (reference 203975_1376_YM1619) and does not constitute property particulars. Whilst we require advertisers to act with best practice and provide accurate information, we can only publish advertisements in good faith and have not verified any claims or statements or inspected any of the properties, locations or opportunities promoted. Rightmove does not own or control and is not responsible for the properties, opportunities, website content, products or services provided or promoted by third parties and makes no warranties or representations as to the accuracy, completeness, legality, performance or suitability of any of the foregoing. We therefore accept no liability arising from any reliance made by any reader or person to whom this information is made available to. You must perform your own research and seek independent professional advice before making any decision to purchase or invest in overseas property.

8 Grande rue Charente-Maritime 17120
More properties from this agent
Request Details
or call 03339 395859
Calling from outside the UK? 0033618473368
Save Property
Add Notes
Please sign in or create an account to add notes
Print
Send to Friend