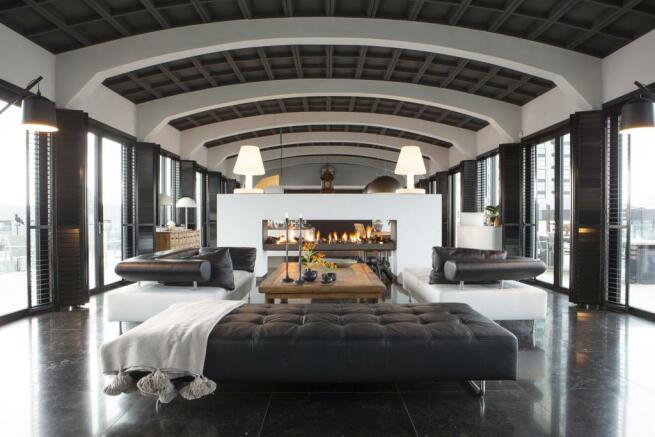 The lighthouse in Eindhoven is a true icon, if not a beacon that could be seen (at the time) from a great distance from all sides. Although the building is much more than just the tower, the name of this beautiful national monument was renamed 'The Light Tower' in 2009. Number 324 occupies the entire top floor of this former light factory on the right-hand side of the tower. On six floors high, with two overwhelming terraces on either side of this historically beautiful penthouse, the centre of Eindhoven is literally at your feet.

The lighthouse marks an era. This is reflected, for example, in the design of the tower, which is a functionalist style with seven corners. The chosen form as well as the appearance of the building were decisive for its function. Although sober, the lighthouse is not only a style icon for Eindhoven, but also a tribute to the legacy of Philips.

The factories of Philips Light have been built on the Lichttoren. These were built, in parts, between 1909 and 1921. In the years 1909 - 1911 the western part of the current Lichttoren complex was built. From 1911 the Lichttoren was in use as a factory. In the period from 1919 to 1921, the factory - which follows the track in a straight line - was further expanded with an extension to the Emmasingel.
For many years, the Light Tower has served as the 'head office' for the lighting division of Philips. Although this division left the building a long time ago, the tower is still lit and gives the City of Lights its own interpretation.

After the lighting division of Philips has left, the upper floors of De Lichttoren will be used for residential purposes in 2008, while on the ground floor space will be created for the catering and retail sectors. In that year, the penthouse on the sixth floor will be acquired by the current residents, who will fill in the space as it is now. A space that can perhaps best be described as an ultra-modern loft within a historical icon, in the middle of the city.

From the side on the Mathildelaan, right next to Usine, as well as the other side of the building on the Lichtplein, you have access to the common spacious entrance of the Lichttoren. Here are the elevators to the upper floors and (parking) cellar, as well as the mailboxes. If you want to go to the sixth floor - to #324 - there is only one elevator. The right one, because only with this elevator and a personal key, you can reach this floor. Secured, which makes this floor perhaps the best kept secret in Eindhoven (approved by the VvE). Once upstairs you get out in the entrance area, which is adjacent to the front door of #324. Also the only door by the way, which means that you don't share this space with anyone else. As soon as the generous front door opens and you enter, you intuitively enter another world. A lovely room overlooking the north (the side of the Bijenkorf), left the living room and right the corridor that includes the master bedroom leads.

We go to the left, and enter after opening the sleekly designed glass sliding doors, the living room. Which actually covers the entire space to the left of the entrance. The beautiful curved white architraves and intermediate black authentic curved concrete ceiling elements accentuate the length of this space and thus the depth. The huge (gas) fireplace with a sense of aesthetics placed in the middle of this space, brilliantly separates the living room from the (living) kitchen and dining room. The fireplace is a real eye-catcher with its view through and illustrates the well thought-out layout of the penthouse. Because behind the kitchen, or rather 'above' the kitchen, an office deck has been created with two desks. A deck that can be reached from both sides by stairs. A staircase that also provides ingenious access to the technical space and 'hidden' storage that has been realized underneath this deck. On deck from 'the bridge' you have a really great view of the kitchen, dining and living room. You will have to experience for yourself how special this is, but the fact that it is genius is an understatement.

The penthouse, which covers an area of 300 square metres, has a terrace that is over three metres deep on both the north and the south sides, along its entire length. The dark steel windows and doors that separate these rooms are equipped with robust steel shutters. Something that not only benefits the atmosphere of the apartment, but also provides a beautiful light. By creating cupboard and storage space along the full length of the penthouse on both sides, deep window sills have been created that create a beautiful and spacious effect.

Behind the kitchen - if you pass the office deck left or right through the hallway - you will find a utility/storage room or a beautiful luxury toilet. These rooms can also be reached by opening a beautiful hard glass door that you simply 'roll' to the side over a sleekly designed visible steel construction.

The toilet is just like the other 'wet areas' in the house impressive and exudes pure luxury and class. In all these rooms it is the beautiful mosaic walls that catch your eye. Modern sanitary facilities, taps, washbasins and even lighting are hardly noticeable. While these are very beautiful in themselves and allow the rooms to merge completely into one design.

This is a property advertisement provided and maintained by Baerz & Co Luxury Homes, Amsterdam (reference 9920) and does not constitute property particulars. Whilst we require advertisers to act with best practice and provide accurate information, we can only publish advertisements in good faith and have not verified any claims or statements or inspected any of the properties, locations or opportunities promoted. Rightmove does not own or control and is not responsible for the properties, opportunities, website content, products or services provided or promoted by third parties and makes no warranties or representations as to the accuracy, completeness, legality, performance or suitability of any of the foregoing. We therefore accept no liability arising from any reliance made by any reader or person to whom this information is made available to. You must perform your own research and seek independent professional advice before making any decision to purchase or invest in overseas property.