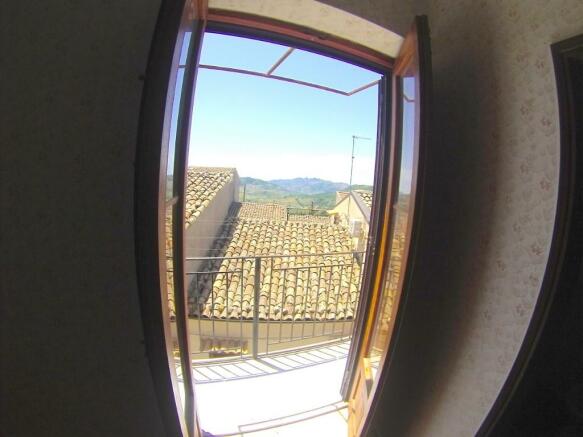 In the heart of historical centre Bisacquino, R'Estate in Sicily is proud to present an independent, detached house, access from Via Marino 51 and via Chiarello 24. That is the strength of this building, with two independent apartments which can be considered as two different first floors if entered from the two different roads. On the ground floor at Via Marino 51 you can find a kitchen with a windowed living room, a toilet with a tub, a laundry area where there is also an old oven. This first part of the building can already be considered as a first small apartment with kitchen, bathroom and bedroom and living area. The large hall leads you to the upper floor, which is accessible from Via Chiarello 24, where there are a big entrance hall and a wide room with a balcony. You may go to the upper floor from a banister, where you find a room similar to the lower entrance hall and a bedroom with a balcony and a toilet with a bathtub. The attic can be inspected and it is possible to make a better use out of it according to the new urban planning legislation. The owner is willing to give some furniture as a gift. There is no heating system at the moment but it is possible to be connected to the municipal methane network. The house is in excellent condition and needs little maintenance. BIG BARGAIN!. Please watch the video.

Bisacquino (Sicilian: Busacchinu) is a town and comune in the Metropolitan City of Palermo in Sicily, Italy. It is located 82 kilometres (51 mi) from Agrigento and has approximately 4,500 inhabitants. The small town rises on an inner hill zone and is 663 metres (2,175 ft) above sea-level. The economy is based on agriculture and products are sold in abundance in the main town including cereals, olives, vegetables, almonds, hazel nuts and wine-grapes. Sheep breeding is also active in Bisacquino. The name Bisacquino derives from an Arabic farm house Busackuin meaning "rich in waters". In the 12th century it was owned by local lords until 1778 when it became a property of the archbishop from Monreale. The Sanctuary of the Madonna of the Balzo near Mount Triona was erected in 1678. The main church is the Cathedral Church of Bisacquino which is dedicated to John the Baptist. It was built in 1713. The Italian-American film director Frank Capra (1897-1991) was born in Bisacquino.

R'ESTATE IN SICILY, offers an exclusive location in the real estate market of the island through privileged contacts to exclusive sites that help make Sicily one of the most desired destinations in the world.


R'ESTATE IN SICILY is a leader in advising on contractual matters and legal, technical , project proposal from its implementation , focusing and proposing the placement on the housing market for each individual investment .

Thanks to important achievements and renovation of old properties , R'ESTATE IN SICILY offers attractive opportunities for private buyers , pension funds and investment funds who are looking for second homes or holiday apartments are ideal for an attractive financial return.

R'ESTATE IN SICILY sells directly and exclusive property inside and estates , with all amenities like swimming pools Monthly , areas dedicated to sports and wellness.

R'ESTATE IN SICILY has also created specialized divisions to provide a consultancy service of excellent quality in order to maintain a high employment rate of residential facilities through partnerships with leading tour operators that convey tourists from every part of the globe .

This is a property advertisement provided and maintained by Immobilbelice, Santa Margherita di Belice (reference 357) and does not constitute property particulars. Whilst we require advertisers to act with best practice and provide accurate information, we can only publish advertisements in good faith and have not verified any claims or statements or inspected any of the properties, locations or opportunities promoted. Rightmove does not own or control and is not responsible for the properties, opportunities, website content, products or services provided or promoted by third parties and makes no warranties or representations as to the accuracy, completeness, legality, performance or suitability of any of the foregoing. We therefore accept no liability arising from any reliance made by any reader or person to whom this information is made available to. You must perform your own research and seek independent professional advice before making any decision to purchase or invest in overseas property.