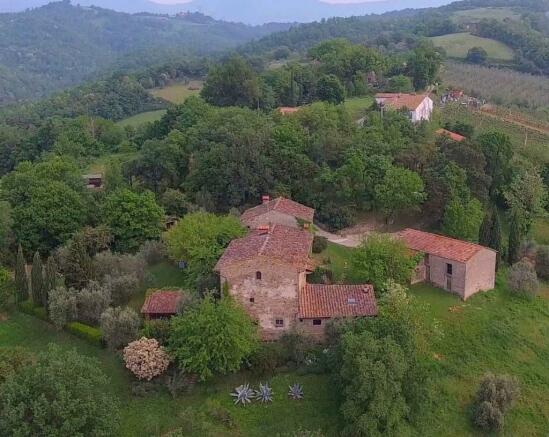 We are in the Mugello north of Florence, where the Medici family has its origins and where many famous artists of the past were born (Giotto, Beato Angelico, Andrea del Castagno etc,). Florence is 35 km from the house, and the center can be reached via the Bolognese road in about 45 minutes; you can easily reach other Tuscan art cities (Lucca, Arezzo, Siena) and the sea (reachable in about 1 hour and a half) due to the proximity of the A1 motorway exit (about 15 km from the house).
The complex consists of three units of which two fully renovated with quality finishes and the third, the barn, to be restored, but with the project prepared and awaiting approval. It is located at the end of the country road named "Via Carniano" at the number 16 and 17 in the countryside of Barberino di Mugello, off the old National road towards Bologna. The main house has been published by Taschen in the book "Country Interiors" and Icons "Tuscany Style" series.
The house is at 450 m above sea level, surrounded by woods and the garden has a beautiful view of the lake. Among the advantages that the property can offer it is worth mentioning the beauty of nature that for reasons of peripheral conditions has not suffered negative influences of industrialization, the significantly cooler climate than other areas of Tuscany, particularly noticeable in recent years, and the character of a unique historic past that you may immediately notice in the typical architectural details.
The main house measuring 525 m2, is on three levels. On the ground floor: study, kitchen, living room + small bathroom as well as large loggia facing the kitchen and a second lodge few meters over the facade; at the first floor: entrance hall, living room, large bathroom and large studio; Second floor: three bedrooms and two bathrooms.
The garden and land close to the house measuring 4,340 m2.
The guest house is measuring 204 m2 and is on two levels: on the ground floor you found the kitchen / living room, bathroom hallway and two bedrooms plus a large pergola in front of the kitchen and second loggia in front; on the first floor large living room and bathroom plus a small studio. The private garden is measuring 820 m2
The barn to renovate is on two levels and currently measures 150 m2, but the restructuring project involves the division of the large room into two levels to get m2 227. The land around is measuring 4,950 m2.

More information from this agent

Chianti is not just a region privileged by nature, shaped by history and the patient work of generations: it is a privileged point of view on the world, a way of looking at it, to combine Man and Nature in the Contemporary.

Studio Immobiliare Marinella Coppi mainly operates in the Chianti area and extends its activity to the urban areas of Florence and Siena, with properties on sale and rent of high and historical value.
Its portfolio consists of a selection of properties which share a characteristic trait of distinction, even if different in their structure, size or commercial value .
The direct relationship with the owners, the constant updating of offers and their careful evaluation, are a feature of the firm. This is essential to ensure a satisfactory transaction. Our goal is to combine your needs with the perfect property, that is screened and presented accurately.
Given the characteristics of the portfolio, either for their own virtues or privileged locations, many of the properties on offer have a natural tourist vocation. Therefore in addition to the main residential function, with the collaboration of established International Agencies, we can offer attractive investment opportunities from seasonal or holiday rent, helping you with the propertys management and promotion.

This is a property advertisement provided and maintained by Studio Immobiliare Marinella Coppi , Florence (reference 21207CasadelPozzo) and does not constitute property particulars. Whilst we require advertisers to act with best practice and provide accurate information, we can only publish advertisements in good faith and have not verified any claims or statements or inspected any of the properties, locations or opportunities promoted. Rightmove does not own or control and is not responsible for the properties, opportunities, website content, products or services provided or promoted by third parties and makes no warranties or representations as to the accuracy, completeness, legality, performance or suitability of any of the foregoing. We therefore accept no liability arising from any reliance made by any reader or person to whom this information is made available to. You must perform your own research and seek independent professional advice before making any decision to purchase or invest in overseas property.