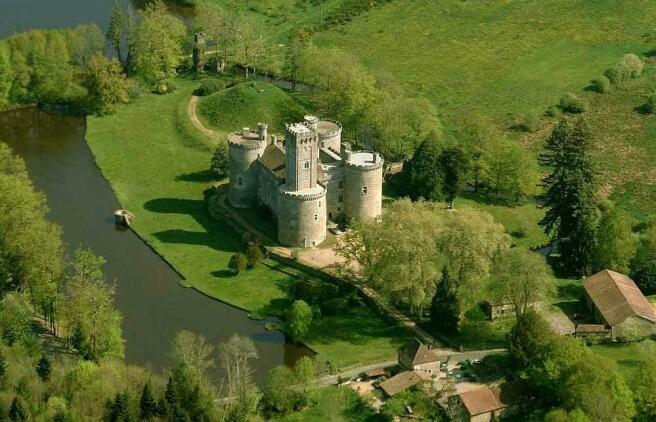 This castle was built in 1179 and is one of only 4 castles from that time in France with a special history relating to the Crusades and King Richard the Lionheart. It is situated in Limousin region of France in the Haute-Vienne.Richard the Lionheart was deadly wounded at nearby Chalus and it has been reported that he died here and his body is buried in the grounds.The property is being sold fully furnished and equipped.This estate of 165 acres of land has several houses, barns and a tavern, it has 4 lakes, a river and various wells. The tavern is fully functional and open to the public. It serves tourists in the surrounding area for food and drink. The restaurant has a capacity for more than 100 people inside for dinner or lunch. Outside there are two terraces with a capacity for over 200 people. It has a parking area and a large barn for multifunctional use. The castle itself has been completely renovated to the standard of modern living without damaging the authenticity of its history; it has satellite services, a central heating system and electricity, computer facilities, a modern kitchen in a rustic style, and most of the rooms have their own hot rooms. The living space contains a great hall, a chapel, offices, music room , master bedroom, 15 guest bedrooms, dining room, large living room, cinema, library, billiard room, conference room, office, jacuzzi, sauna, staff rooms and more. A total of approximately 3500 square meters of living space.There is a great hall, which can be used for many occasions. It can, for example, serve as an audience for recitals or house concerts.Next to the great hall there is a dining room which is designed to seat 26 for dinner and is served The kitchen is fully equipped, the kitchen is fully equipped, and the kitchen is fully equipped. It has been designed with a cozy atmosphere. It also has a cool-room.From the kitchen there is kitchen and dining room.The Castle contains office areas. The master bedroom is equipped with an extra-large bed with a built-in flat screen TV.It has its own bathroom with a Jacuzzi and a sauna. This room has a private dining room with a kitchenette giving access to a terrace on the roof of the castle.All rooms were restored in the late 1990's based on careful studies of the period when the castle was built.With the intention of private use, hot water, cascading showers, and electricity.Over the years the property has attracted the attention of many famous people Brad Pitt, and others.A great solution for someone looking for private residence or business interest- this offers both, and this castle is arguably among the most important properties in France

Our agency is based in Bourganeuf, a town in Limousin with a population of 3,500. Limoges is about 45 minutes from here, and it is accessible by, among others, a budget airline from Stansted.

This region is mainly rural, the main activities being beef cattle farming and forestry. Tourism is just taking off. It is known for its quiet and tranquil surroundings, and its low levels of crime and pollution, probably due to the low population density (one tenth of the UK). Saying that, the landscape is beautiful and always different - and that isn't just our opinion!. With its hills, forests and meadows, it can be compared in some aspects to Canada, or even some parts of England a long long time ago. There is no shortage of space giving a real sense of freedom, or lakes and rivers to fish. We also have the biggest man-made lake in France - Vassivière (one thousand hectares). In the old towns of Aubusson known for its tapestries, Limoges (pottery) or Saint Leonard, one can feel the history.

Opened in September 2001, our agency, Cendrillon Immobilier, works hard to help foreign people who want to buy property here, whatever the purpose. We listen carefully to our customers to understand their needs (so we do not waste your time) and provide a choice of suitable and adapted properties. After you have made your choice, we assist you all the way through the purchase process. After it is completed, we have an after sale service to help you to overcome all the problems you might encounter in relation with paperwork and other aspects such as renovation and purchase of items for the property for instance.

This is a property advertisement provided and maintained by Cendrillon Immobilier, Bourganeuf (reference mdr10-2019) and does not constitute property particulars. Whilst we require advertisers to act with best practice and provide accurate information, we can only publish advertisements in good faith and have not verified any claims or statements or inspected any of the properties, locations or opportunities promoted. Rightmove does not own or control and is not responsible for the properties, opportunities, website content, products or services provided or promoted by third parties and makes no warranties or representations as to the accuracy, completeness, legality, performance or suitability of any of the foregoing. We therefore accept no liability arising from any reliance made by any reader or person to whom this information is made available to. You must perform your own research and seek independent professional advice before making any decision to purchase or invest in overseas property.

2 Rue de la Révolution 87290 Chateauponsac France
More properties from this agent
Request Details
or call 03339 395630
Calling from outside the UK? 0033555549585
Save Property
Add Notes
Please sign in or create an account to add notes
Print
Send to Friend