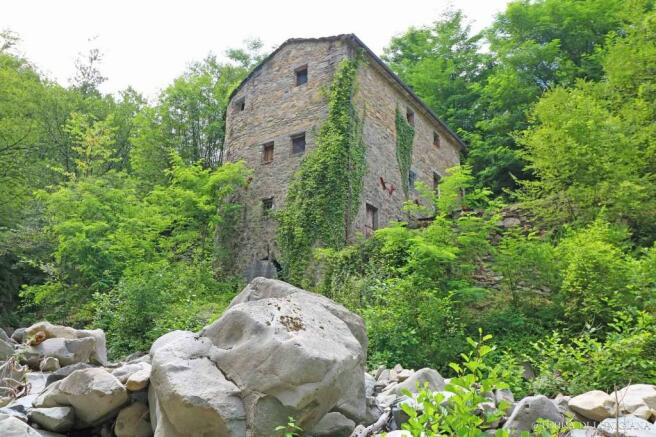 Immersed in a small unspoilt paradise, we offer Beautiful Watermill of about 120 square meters. restored and composed on the basement floor by two cellars with ancient millstones inside. On the ground floor there is a large living room with fireplace, built-in kitchen and bathroom. On the First Floor by Two Rooms and Bathroom. Characteristic details like Parquet, Cotto, Stone make this object unique. Around the building exclusive land for about 5000 square meters. Inside two small buildings to be totally recovered. The access road is unpaved for about 400 meters, but can also be reached by traditional cars. Water is collected by pump. The light is via a generator, but it can be connected to the public network.

MULAZZO: It is located in the upper course of the Magra and extends from the bottom to the Apennine buttress that separates Vara's basin from Lunigiana and culminates in Cornoviglio Mountain. It develops north of the course of the Teglia torrent, including the valleys of Mangiola and Geriola.
The village has two access doors and preserves the original structure characterized by narrow lanes. The site of an ancient castle of Liguria and of a castle of which remains only the so-called Dante tower, which remembers the presence of the poet in Lunigiana, Mulazzo is also possible to admire the ancient arches of the Malaspiniano and Piazza Dante aqueducts, dominated by the church of San Nicolò and the palace Malaspina Zini.
Mulazzo is also home to the Malaspinian Center of Studies, within which are kept unpublished documents concerning the family. In August, the BancarelVino fair is held, where a prize is awarded to the best producing company and during the same time you can taste wines from the area.
The territory of the municipality is dotted with castles and fortified villages: Montereggio, the site of the book fair, the village of Castevoli, the castle of Lusuolo, home of the Emigration Museum, the castle of Gavedo, Canossa, Campoli, where a new stella statue and Castagnetoli, famous for the production of a typical lunigian cooking tool, the text.

BY CAR: The highway exit is only 15 minutes from this property. The city of Mulazzo is located about 55 minutes from Parma, 25 'from La Spezia and Massa, 45' from Viareggio-Sestri Levante-Chiavari, Cinque Terre, 90 'Milan-Bologna-Brescia- Casello Nervi / GE. For ski lovers, around 35 'is Zum Zeri, or in one hour you can reach Cerreto Laghi (RE)

BY TRAIN: Pontremoli Train Station is about 15 mins. Rich in connections, it also allows you to reach the seaside resorts in no time.

This property is situated in Lunigiana, the northernmost part of Tuscany.
A region full of mystery, surrounded by hills, woods and chestnut oaks, vineyards, olive groves overlooking the famous Apuan Alps. Each village is rich in history and monuments and castles to visit. Nature trails (Hiking, Horse, Mount bike) and the famous Via Francigena, which connects with ancient Rome.

Terra di Lunigiana was founded by William Filippi to make known, through his properties, the history of this magnificent land located between Medieval Castles, Ancient Watercourses and Millennial Stone Roads

Terra di Lunigiana was founded by William Filippi, to be known through his properties, the history of this magnificent land between Medieval Castles, Ancient Watercourses and Millennial Stone Roads. Visit our properties scattered throughout the historic Lunigiana. Stone Houses, Country Houses, Villas, Farms, Castles, Apartment etc ...

This is a property advertisement provided and maintained by Terra Di Lunigiana, Pontremoli (reference 310) and does not constitute property particulars. Whilst we require advertisers to act with best practice and provide accurate information, we can only publish advertisements in good faith and have not verified any claims or statements or inspected any of the properties, locations or opportunities promoted. Rightmove does not own or control and is not responsible for the properties, opportunities, website content, products or services provided or promoted by third parties and makes no warranties or representations as to the accuracy, completeness, legality, performance or suitability of any of the foregoing. We therefore accept no liability arising from any reliance made by any reader or person to whom this information is made available to. You must perform your own research and seek independent professional advice before making any decision to purchase or invest in overseas property.

Via Mons. G. Sismondo 45, Pontremoli, Massa Carrrara, Italy, 54027
More properties from this agent
Request Details
or call 03339 390369
Calling from outside the UK? 003493489333
Save Property
Add Notes
Please sign in or create an account to add notes
Print
Send to Friend