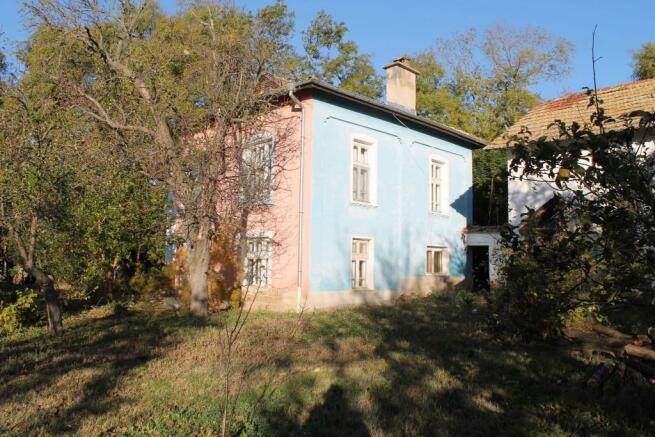 Solid spacious stone built house in the village of Mechka.

The village is located 15 miles away from the city of Pleven, 10 miles from the town of Slavyanovo and 18 miles from he Nikopol Ferry crossing to/from Romania. The neighboring village of Evlogievo is 2 miles east. The capital city Sofia is 128 miles southwest. The Osam River passed near the village.

The village of Mechka has a population of 750.

There are functioning a primary school, 2 shops, a pub, a restaurant, a post office and bus transportation.

The house is consists of 3 double bedrooms, 2 family rooms, a kitchen and a shower room.

The windows are double glazed.

There is a wood burning stove feeding 4 radiators and a fireplace.

The house is with alarm system.

A new roof was made 5 years ago.

Many outbuildings have in the property. In the massive white outbuilding has space for 7 horses.

The garden is very spacious, there are fruit trees and a walnut trees.

The house is located in the center of the plot and from the main gates should be driving to it.

Unique opportunity to purchase this classic home set in just under 4000 sqm. land.

Pleven is the 7th most populous city in Bulgaria. Well known as a major economic centre of the Bulgarian Northwest and Central North and the 3rd largest city of Northern Bulgaria after Varna and Ruse. Located in the northern part of the country, it is the administrative centre of Pleven District, as well as of the subordinate Pleven Municipality.

Pleven is located in an agricultural region in the very heart of the Danubian Plain, the historical region of Moesia, surrounded by low limestone hills, the Pleven Heights. The city's central location in Northern Bulgaria defines its importance as a big administrative, economic, political, cultural and transport centre. Pleven is located about 100 miles away from the capital City of Sofia, approximately 195 miles west of the Bulgarian Black Sea Coast and about 30 miles south of the Danube River. The River Vitflows near the town and the tiny Tuchenitsa River crosses it.

The Pleven Regional Historical Museum is a very popular tourist attraction while the Svetlin Rusev Donative Exhibition, situated in the former public baths, exhibits works by Bulgarian artists as well as noted Western European art figures like Pablo Picasso, Salvador Dali, Renato Guttuso and many others. The Ivan Radoev Dramatic Theatre is the centre of theatrical life in Pleven.

Pleven is often regarded as an important centre of sports in Bulgaria. The sports school in Pleven is thought of as one of the most prominent in the country. Pleven is also famous for its Kaylaka (where the ruins of the Storgosia fortification can be found) and Skobelev parks. The later is home to the Pleven Panorama and is situated on the original location of the battle during the Russo-Turkish War.

The District of Pleven is crossed from south to north by the Rivers Iskar, Vit and Osam (in west-east order); the river valleys are separated by limestone plateaus.


***Notary deal: The fees for the Notary transfer (deal) are not included in the property price, and they must be paid by the buyer prior to the deal. They are: 350£ (Notary & Legal Fees) + 5% of the property price (Governmental Fees).

MOWLEM was established in 2005 in the city of Ruse on the philosophy that we would endeavour to give the best possible customer service and enjoy ourselves while we were doing it. We work very hard at achieving both these aims.


MOWLEM aims to be a leading provider of agency, professional and consultancy services across the whole range of rural, commercial and residential properties, agriculture and the environment. The principal activity is attended with real estate including building, repairs, sale-trades and lettings.


WE SELL MAINLY PROPERTIES THAT WE OWN, after they have been well selected and checked. We make a research about the area as well and try to choose the best located properties. Our properties are well maintained while they are being sold. We look after the garden, check the roof, and keep them in the conditions they are when reserved until they are fully paid and transferred to the new owner(s).


WE ARE ONE OF THE FIRST AGENCIES who created the PAY MONTHLY TERMS for the selling of properties. This is because we are flexible with the terms and the negotiations are made directly with us (being the owners of these properties). This method of selling gives more opportunity for clients with limited budget to fulfill their dream of owning a property in Bulgaria.


WE HAVE OFFICES in the UK and in Bulgaria, making it easier for clients to contact us from any country. Our English partner Paul Hawtin is always ready to meet you in person and discuss all about the buying process. Paul has adopted Bulgaria as his second home and enjoys spending half year in the UK and the other half in Bulgaria. He is the right person to advise you about the full process of buying in Bulgaria, about investing, living and holidaying in Bulgaria and everything else connected to Bulgaria. Hence our favorite motto "Better Call Paul".


IT'S OUR BELIEF that clients deserve to be treated in a friendly and approachable manner and we therefore provide a personal service. Our emphasis is on efficiency and communication. If an issue is within our control we will deal with it quickly, or alternatively, keep you informed regarding matters involving third parties.


OUR CONTINUAL PROGRAMME OF STAFF TRAINING and continuous market research ensure our service stays ahead of our competitors. The adoption of modern marketing methods and constant evaluation of cutting-edge technology also enables us to react quickly to change and provide the very best for all our customers. In short, whilst we know we can not rest on our laurels, we are very confident the service we provide is second to none in the region.


WE ARE A FULL SERVICE PROVIDER  arranging travel and accommodation, covering all legal aspects related to a property deal, and providing after-sale service. At present about 40% of our business comes from referrals from previous clients or foreign partners, so you could see our Bulgarian property offers advertised on other estate agents websites and brochures.


WE ARE A BULGARIAN-BASED and owned estate company with our own team of builders and network of local agents. This enables us to offer flexible service and lower commissions. We specialize in holiday and investment properties in Bulgaria with up-to-date information on the perspective regions at the Bulgarian Black Sea coast, mountains as well as in the countryside.


OFFERING an excellent professional service but retaining the personal approach, we can give you advice on all aspects of buying, selling , letting, legal and book-keeping services, travel services, car rental, etc.


NOT ONLY do we offer the sale of real estates, but the entire decision for you, your family and your business, attended with home, accommodation, land or building.


WE ARE AT YOUR SERVICE!

This is a property advertisement provided and maintained by Mowlem Real Estate Agency, Ruse (reference 424) and does not constitute property particulars. Whilst we require advertisers to act with best practice and provide accurate information, we can only publish advertisements in good faith and have not verified any claims or statements or inspected any of the properties, locations or opportunities promoted. Rightmove does not own or control and is not responsible for the properties, opportunities, website content, products or services provided or promoted by third parties and makes no warranties or representations as to the accuracy, completeness, legality, performance or suitability of any of the foregoing. We therefore accept no liability arising from any reliance made by any reader or person to whom this information is made available to. You must perform your own research and seek independent professional advice before making any decision to purchase or invest in overseas property.

Learn everything you need to know to successfully find and buy a property in Bulgaria.