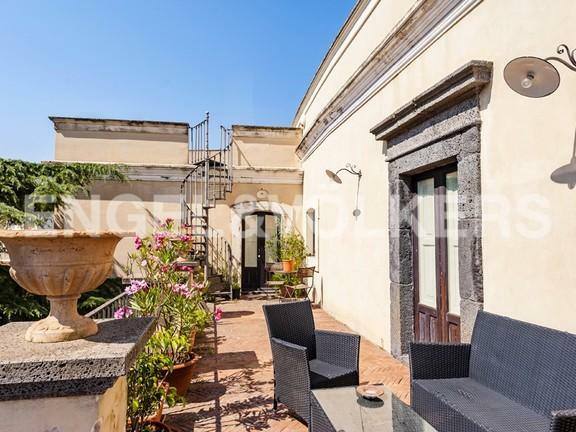 A former mansion of 18th century, located in the centre of Viagrande, just few meters from the famous San Mauro Church, has been restored in the early 2000's with finishes in perfect sicilian style.
The property is set over two levels overlooking a garden of a 200 square meters with driveway access. The entrance is situated on the ground level which hosts the reception room and the living room with terracotta tile flooring and a big pitch stone fireplace. From this level a lava stone made staircase leads to the upper floor which hosts the sleeping area, the kitchen-diner, the dining room and the living room with a terrace that leads to the private garden. From the access corridor situated near the sleeping area a modern Corten steel staircase leads to an attic floor with sloping ceilings.
Moreover, on the ground floor there is an apartment with separate entrance, composed of kitchen, living area, bedroom and bathroom.
Viagrande is a hilltop village of ancient traditions, which rises on the Etna slopes at 410 meters above sea level. In the past it was a famous as a holiday resort for catanian nobles, for this reason there are many historic villas with wide vegetation. The modern part of the town is predominantly made up of small houses and almost total absence of large condominiums. The territory of Viagrande is surrounded by beautiful and fertile countryside, full of lush vineyards and orchards of all kinds. On the territory of the municipal district some Protected Destination Origin foodstuffs are produced, such as the Prickly pear, Cherry, and the Extra Virgin Olive Oil of Etna.¿The town is located less than 10 km from Catania and about 5 km far from the motorway A18 which allows to reach easily many important Sicilian towns, such as Taormina, Syracuse and Ragusa. 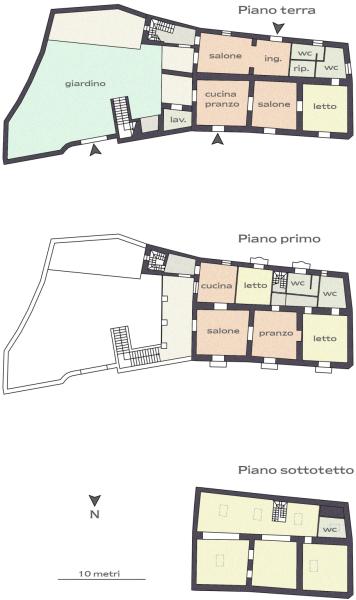 Engel & Völkers is one of the worlds leading service companies in the provision of high quality residential and commercial real estate and yachts in the premium segment. With its licensing system and the 5,000 employees in 38 countries Engel & Völkers is the only German company among the top 100 franchise companies in the world. Around 540 shops specialized in high residential real estate and 60 commercial offices which provide office, retail and industrial space, investment properties, residential and commercial buildings and property portfolios offer private and institutional clients a professional range of services.

This is a property advertisement provided and maintained by Engel & Voelkers Italy, Engel & Volkers Taormina - Etna (reference W-02GGOL) and does not constitute property particulars. Whilst we require advertisers to act with best practice and provide accurate information, we can only publish advertisements in good faith and have not verified any claims or statements or inspected any of the properties, locations or opportunities promoted. Rightmove does not own or control and is not responsible for the properties, opportunities, website content, products or services provided or promoted by third parties and makes no warranties or representations as to the accuracy, completeness, legality, performance or suitability of any of the foregoing. We therefore accept no liability arising from any reliance made by any reader or person to whom this information is made available to. You must perform your own research and seek independent professional advice before making any decision to purchase or invest in overseas property.

Engel & Völkers Taormina - Etna Piazzetta Leone, 2 98039 Taormina Italy
More properties from this agent
Request Details
or call 03339 395574
Calling from outside the UK? 00393473883443
Save Property
Add Notes
Please sign in or create an account to add notes
Print
Send to Friend