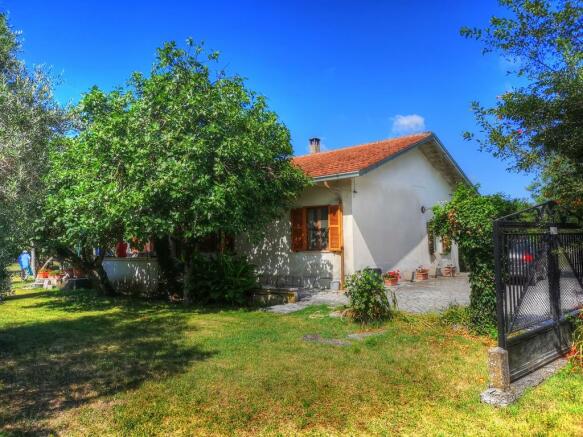 Casa Campo Stefano near the bustling town of Arce creates a unique solution for those who love the simplicity and harmony that a quiet and traditional country house can offer.

The house is structured on a single level, and provides a versatile solution for people of every age, given the ease in reaching every point of every room. This includes the home's beautiful 2,000 sq.mt. of outdoor areas, where the garden evolves visually before you, ideal for gardening lovers while being on flat terrain. An above ground pool (available by separate agreement) adds to the enjoyment, while a lovely gazebo and patio hint at future al fresco dining in the warm Italian evenings.

Casa Campo Stefano's 3 bedrooms, 2 bathrooms and 2 living rooms have modern finishes in rustic and multi-ethnic styles that however leave room for further development and restyling, from the paintings to the external elements of the property.

The 210 sq.mt. property is secluded and tranquil with a rural country feel, while being excellently positioned both for public transport on bus routes and for accessing the Rome/Naples autostrada. Nearby restaurants, cafés, bars, shops and supermarkets ensure easy day-to-day living. Many discerning travellers seeking new horizons are enticed by the Ciociaria for a visit or for their new home .

ARCE AND THE CIOCIARIA

Arce is one of the major medieval hilltop towns in the area of Italy called the Ciociaria, the name given to the fertile land that lies south of Rome but north of Naples, situated inland in the hills in the heart of Italy.

The city retains its medieval appearance in the steep, narrow streets of its historic center. By contrast, a large part of the modern built-up area developed along the Via Casilina below, well connected to the main communication routes and services.

Cicero speaks of the territory "Arcanum" and of a Villa Arcana, described and magnified. Certain inscriptions and some remains remain from the Roman period. Let's not forget that in the territory of Arce there was the Latin colony of Fregellae founded by the Romans in 328 BC. Today it is a very important archaeological park, which, with scientific excavations at the university level, is coming to light and can be visited at any time of the year.

Moving forward from the Roman period towards the Middle Ages, Arce suffered troubled times: occupied in the 5th century; the Goths of Totila; war with the Byzantines; and later devastated by the Saracen hordes.

It was a strategic place of considerable importance, situated on the border between the Papal States and the Kingdom of Naples.

The Ciociaria region is within easy reach of both Rome and Naples and their respective airports. A day's shopping in Rome is a common pastime, while an even shorter drive brings you to the charming beaches south of Rome. Alternatively, drive east, and the mountains of the Abruzzo National Park await with horse trekking in the magnificent beech forests, and sparkling mountain lakes and rivers where you can swim in the heat of the summer. And at the other extreme of temperature, although Arce itself is temperate, less than an hour's drive brings you to the winter ski slopes.

Often overlooked, both by tourists and by those foreigners in search of an Italian home, in favour of the more publicized regions of Tuscany and Umbria, the Ciociaria remains largely an unspoilt gem with beautiful scenery and medieval hilltop towns. A home or second home in the Ciociaria, in the hilltop towns of Arce, Arpino, Veroli, Alatri or in the rolling countryside that surrounds them, will afford you a setting where over two thousand years of history combine with an idyllic rural Italian lifestyle, where you can still discover the 'real' Italy and take time out from the busy crowds of the larger tourist cities, while being less than ninety minutes journey from central Rome or either of Rome's two airports.

This is a property advertisement provided and maintained by Via Romana Srls, Italy (reference CasaCampostefano) and does not constitute property particulars. Whilst we require advertisers to act with best practice and provide accurate information, we can only publish advertisements in good faith and have not verified any claims or statements or inspected any of the properties, locations or opportunities promoted. Rightmove does not own or control and is not responsible for the properties, opportunities, website content, products or services provided or promoted by third parties and makes no warranties or representations as to the accuracy, completeness, legality, performance or suitability of any of the foregoing. We therefore accept no liability arising from any reliance made by any reader or person to whom this information is made available to. You must perform your own research and seek independent professional advice before making any decision to purchase or invest in overseas property.