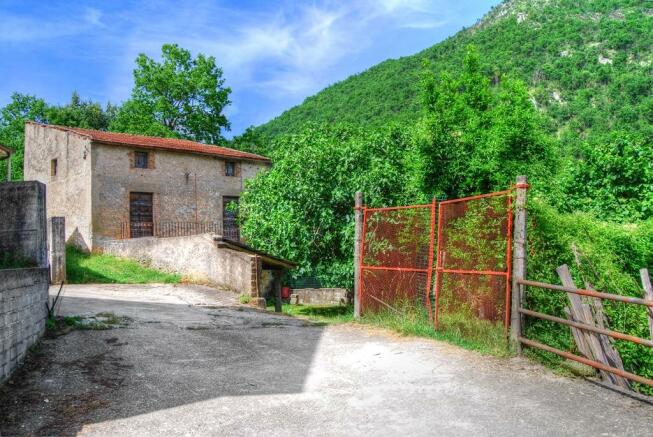 Start slideshow
previous image1 of 7 next image
The rudere
Enlarge
< >

A 80 sq.mt. traditional 'rudere' or ruined stone house for restoration located in glorious countryside between the lake of Posta Fibreno and the charming small town, also called Posta Fibreno, with its restaurants, cafés, bars, shops and services.

The restoration of the ruin could create two bedrooms, a living room, a kitchen and a bathroom with loft space to be configured to meet the purchasers' desire.

There is a 15 sq.mt. terrace and a surrounding garden.

There is good road access to the nearby towns, both Posta Fibreno itself and also to the historic hilltop towns of Alvito and Arpino. An easily reached superstrada leads to the main Rome/Naples autostrada, and the centre of Rome is less than two hours away.


POSTA FIBRENO, ARPINO AND THE CIOCIARIA

The town of Posta Fibreno takes its name from the fact that, being halfway between Rome and Naples, it was the place where horses were used to deliver mail. The Nature Reserve at Posta Fibreno has been created to protect the beautiful lake, which is formed by pure crystal-clear water coming from the slopes of the nearby mountains of the Abruzzo National Park and which in turn gives life to the sparkling waters of the Fibreno river (as Cicero reports in De Legibus). A unique floating island of vegetation in the centre of the lake has been in existence for at least two thousand years.

Arpino is one of the major medieval hilltop towns in the area of Italy called the Ciociaria, the name given to the fertile land that lies south of Rome but north of Naples, situated inland in the hills in the heart of Italy.

Often overlooked, both by tourists and by those foreigners in search of an Italian home, in favour of the more publicized regions of Tuscany and Umbria, the Ciociaria remains largely an unspoilt gem with beautiful scenery and medieval hilltop towns. A home or second home in the Ciociaria, in the hilltop towns of Arpino, Veroli, Alvito or in the rolling countryside including Posta Fibreno that surrounds them, will afford you a setting where over two thousand years of history combine with an idyllic rural Italian lifestyle, where you can still discover the 'real' Italy and take time out from the busy crowds of the larger tourist cities, while being less than ninety minutes journey from central Rome or either of Rome's two airports.

This is a property advertisement provided and maintained by Via Romana Srls, Italy (reference RuderePostaFibreno) and does not constitute property particulars. Whilst we require advertisers to act with best practice and provide accurate information, we can only publish advertisements in good faith and have not verified any claims or statements or inspected any of the properties, locations or opportunities promoted. Rightmove does not own or control and is not responsible for the properties, opportunities, website content, products or services provided or promoted by third parties and makes no warranties or representations as to the accuracy, completeness, legality, performance or suitability of any of the foregoing. We therefore accept no liability arising from any reliance made by any reader or person to whom this information is made available to. You must perform your own research and seek independent professional advice before making any decision to purchase or invest in overseas property.