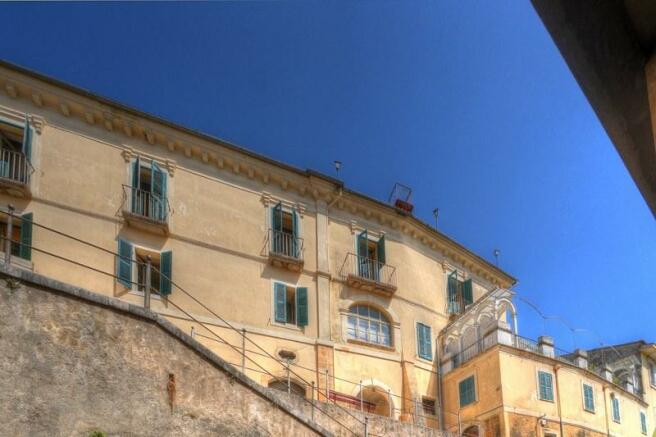 Palazzo nobile for sale in Alvito
In Alvito, in Via San Giovanni we sell Palazzo Nobile of 1400.
The Palace of MQ 950 is spread over 3 levels.
Ground floor: entrance and local cellars;
First floor: Noble rooms, colonnade Terrace, Roof garden. MQ 300 approx;
Second floor: Noble salons, panoramic terrace. Mq 300 approx.
The structure, from the late Renaissance period, forms a logical continuation of the adjacent ducal palace belonging to the gallium (now seat of the town hall). In fact it is said that in that place there were the appliances at the service of the governor's apartment. This palace was inhabited, starting from the end of 1200, by a branch of the noble family Castrucci and precisely by Marco Petruccio, who here found the exile in 1329 from Lucca following the outcome of the wars between Guelphs and Ghibellines. Marco Petruccio, son of Marc'Antonio and Francesca degli Antelminelli, thanks to this patrician parentage by mother, he received the title of Count of the Garfagnana (1326) from the Duke of Lucca, Pisa and Pistoia (Castruccio Castracane degli Antelminelli) and Followed by Duke of Castelnuovo (1327) by the Emperor Ludwig the Bavaro. The descendants of this family have lived since then always to Alvito rising slowly from the economic difficulties derived from the exile (especially at the hands of Anastasio in the XVIII century) and over time have contributed to write interesting pages of History of the country through characters such as Giovan Paolo Mattia Castrucci (1575-1633), who is remembered for having written for the first time a text on the history of the Duchy of Alvito (1599). The branch of Pier Castruccio (1543), a great by Marco Petruccio, has always formed the main family of the town. It, together with the ancient fourteenth-century castle, possessed vast rustic and urban properties, including the Palace of which we speak. From the end of the nineteenth century to the second half of the twentieth century the palace was inhabited by the last descendants (Valerio and his son Vincenzo), who undertook father in son the not easy profession of doctor. This beautiful and stately building today represents, together with others, the living testimony of an age of historical-cultural splendor
Price lowered to ?350,000.00.

Our Story
Alfano RE is proud of its history and to be part of the evolution of the Italian Real Estate profession, there are very few agencies that can boast more than 37 years of history and that have maintained a consistency in the quality of services.
Angelo Claudio Alfano founded his first real estate agency in Roccasecca in 1983. He is joined by his daughter Claudia and his son Marco.
Their honesty and deep dedication to the profession continue to be the heart of the philosophy of our work today.
Alfano RE agents and partners are chosen on the basis of strict selection criteria in order to guarantee the best possible service.
Alfano RE is an official member of FIMAA Italia, the first association of real estate agents and professionals, and Dr Angelo Claudio Alfano was its founder and President for the province of Frosinone.
The present is made of so much attention to international customers who love Italy and who want to realize their dream: "to have a home in ITALY".

What we do
We manage a demanding and international clientele in the search for the ideal property and suitable for their lifestyle, building relationships of Value.
Alfano RE is the most innovative real estate agency, it deals with the brokerage of the most beautiful properties and accompanies the customer with maximum efficiency in the management of the process of Buy-Sell.

This is a property advertisement provided and maintained by Alfano Real Estate, Roccasecca (reference PALAZZOCASTRUCCI) and does not constitute property particulars. Whilst we require advertisers to act with best practice and provide accurate information, we can only publish advertisements in good faith and have not verified any claims or statements or inspected any of the properties, locations or opportunities promoted. Rightmove does not own or control and is not responsible for the properties, opportunities, website content, products or services provided or promoted by third parties and makes no warranties or representations as to the accuracy, completeness, legality, performance or suitability of any of the foregoing. We therefore accept no liability arising from any reliance made by any reader or person to whom this information is made available to. You must perform your own research and seek independent professional advice before making any decision to purchase or invest in overseas property.

Via Casilina Nord 29 Roccasecca 03038 Italy
More properties from this agent
Request Details
or call 03339 871879
Calling from outside the UK? 00393348094290
Save Property
Add Notes
Please sign in or create an account to add notes
Print
Send to Friend