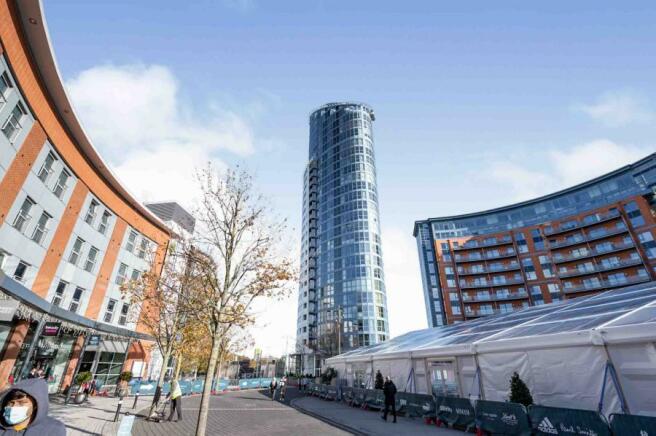 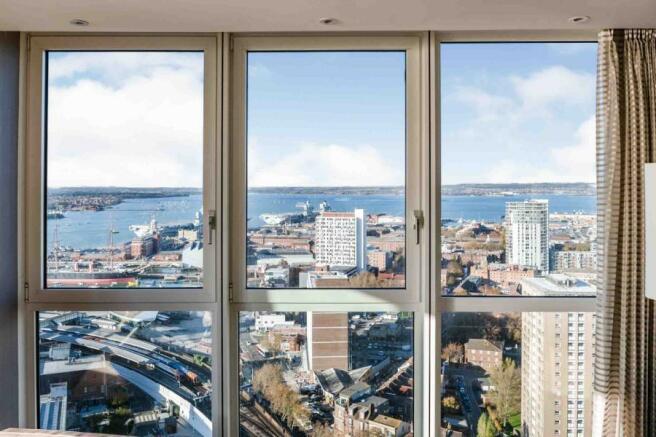 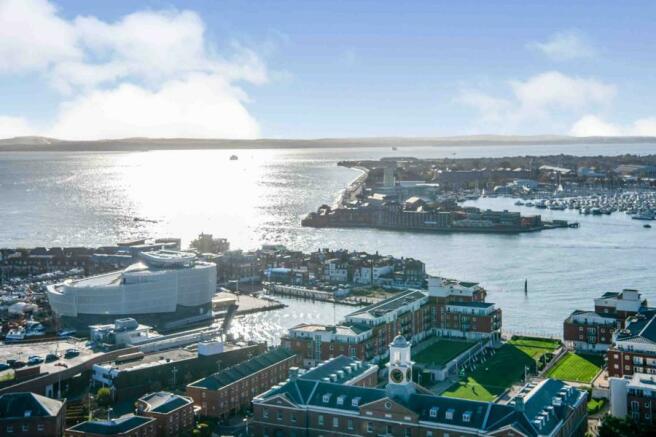 A unique opportunity to purchase this stunning two bedroom apartment in the sought after No1 Building; set within prestigious Gunwharf Quays.
Located on the 26th floor the apartment features incomparable panoramic views, from every room, over the historic Portsmouth Dockyard and out across The Solent.
If you're looking for an apartment to impress this is it! Internally the apartment is finished to the highest possible standard throughout, with two double bedrooms both with spectacular en-suites, a large open plan living area opening out onto the private balcony - perfect to enjoy those spectacular views. The kitchen is finished to the ultimate standard to include granite work surfaces, integral coffee machine, wine fridge along with normal appliances. Both under floor heating and air conditioning ensure the apartment is consistently the right temperature to relax and enjoy this distinctive space.
Privacy is guaranteed with the 24hour concierge for the building, two underground parking spaces with direct entry to the lift which is accessed via residents key fob.
In our opinion this apartment is perfect for high end, exclusive living or as a second home for those who enjoy the convenient access to Gunwharfs shopping and nightlife.
No.1 Gunwharf Quays, also known as East Side Plaza Tower or the Gunwharf Tower Building, is a 101-metre (331 ft) tall residential building with 27 floors. It is commonly referred to as The Lipstick because of its shape, and was successfully completed in 2008. The tower was the flagship of a 3-part project that consisted of The Blue Building, The Crescent and The East Size Plaza tower (No1. Gunwharf Quays). The £50m project was completed in 2010. The building also won Best Urban Regeneration Housing Scheme in 2004.
Gunwharf Quays itself is an exclusive shopping centre located in Portsmouth. Uniquely positioned in a cultural harbour front location in the heart of Portsmouth, Gunwharf Quays is the South's leading designer shopping outlet.
Set right on the beautiful Solent waterfront, it is the ideal place to explore, shop, dine and take in the exciting sights of this historic coastal city.
It was constructed in the early 21st century on the site of what had once been HM Gunwharf, Portsmouth. This was one of several such facilities which were established around Britain and the Empire by the Board of Ordnance, where cannons, ammunition and other armaments were stored, repaired and serviced ready for use on land or at sea. Later known as HMS Vernon, the military site closed in 1995, and opened to the public as Gunwharf Quays after six years of reconstruction (which included the restoration of some of the surviving 18th and 19th-century Gun Wharf buildings).

To own your piece of modern history we believe viewing is truly an essential to appreciate this unique apartment, strictly by appointment only.

Our branch is situated on Hampshire Terrace (A288), just around the corner from Portsmouth University. Our experienced team have extensive knowledge of the city, and you can be assured you'll be in safe hands when choosing us as your dedicated agent.

Portsmouth is a vibrant city with a large University and a strong naval history and International Port. The port is the second busiest in the UK, after Dover. Portsmouth is the only island city in th

Disclaimer - Property reference ASA200177. The information displayed about this property comprises a property advertisement. Rightmove.co.uk makes no warranty as to the accuracy or completeness of the advertisement or any linked or associated information, and Rightmove has no control over the content. This property advertisement does not constitute property particulars. The information is provided and maintained by Morris Dibben, Portsmouth. Please contact the selling agent or developer directly to obtain any information which may be available under the terms of The Energy Performance of Buildings (Certificates and Inspections) (England and Wales) Regulations 2007 or the Home Report if in relation to a residential property in Scotland.