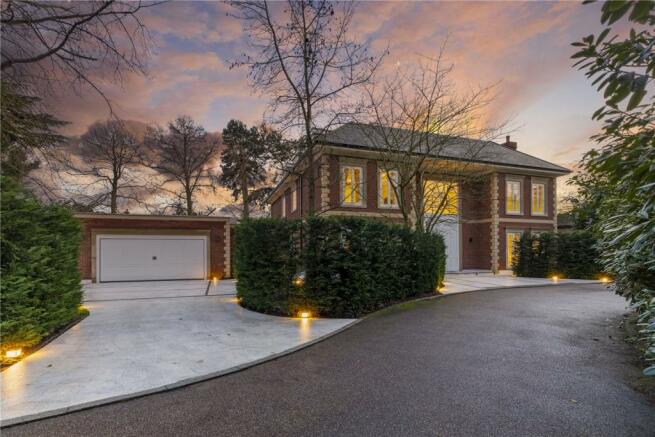 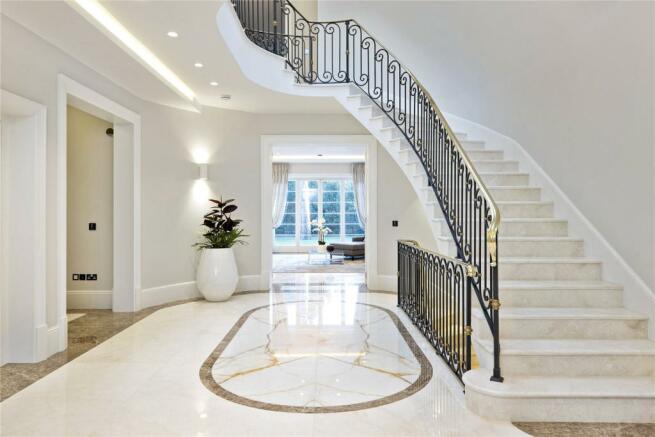 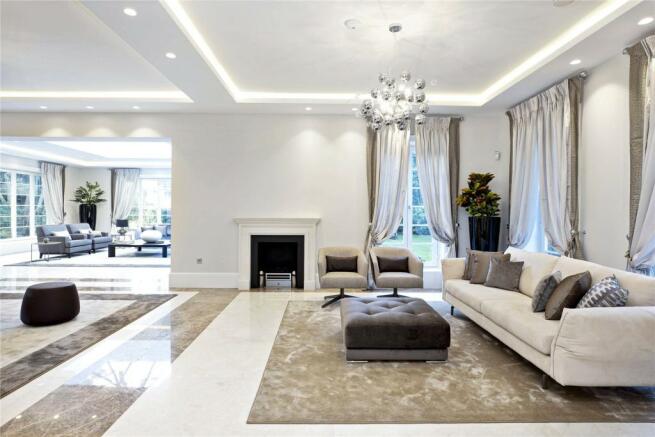 A rare opportunity to buy an exceptional newly built detached house completed to extremely high standards. The property is set within a small private development of 4.72 acres (formerly the rented residence of General Eisenhower during World War II) with only five other substantial detached houses. The development which is extremely secure benefits from 12 hour security which is manned at the entrance just off Warren Road. This spectacular designed neo-Georgian classic detached house offers accommodation of approximately 12,476 ft2 (1,159 m2) is ready for immediate occupation and is within a plot of approximately 0.5 acres with a south and west facing rear garden. The property benefits from a large forecourt with garaging for three cars and an indoor swimming pool with steam shower room.

The property has been constructed to exceptional standards with no expense spared. It benefits from concrete flooring to ground, first and second floor levels with full air conditioning and a heat source recovery system with cavity insulated walls and roof voids. CCTV Cameras externally and internally have been installed with HDMI cabling allowing complete remote operation of the property and the mood lighting. The property also benefits from fresh air circulation to the ground floor and water harvesting system. The double glazed quality timber framed French style windows with stone window sills and French doors around the perimeter are Italian made. Internally, the property benefits from quality fittings such as the bespoke Italian Designed Poliform kitchen with top quality Gaggenau, Wolf and Sub Zero appliances, book matched Italian polished marble flooring and walls to the bathrooms and main living areas, staircase and reception halls, Italian bathroom fittings, Aqua televisions to the bathrooms, quality bespoke Poliform built in wardrobes to the bedrooms with leather finishes to the principal dressing room suite. Solid doors with chrome handles, designer architraves and skirting boards and marble fireplace to the drawing room and principal bedroom.

A prestigious house ideally placed in respect of Transport and education facilities. Knightsbridge by car is approximately 8 miles away and the much improved A3 within just a few minutes from Warren Road at the bottom of Kingston Hill or to the end of Coombe Lane West. From here, it is a straight forward journey to link up with the M25 motorway, which gives speedy access to both Gatwick and Heathrow Airports.

Trains stations at Norbiton and New Malden have regular services to London Waterloo where there is a direct Underground link to the City. The nearest tube station to Warren Road is at Wimbledon.

Warren Road is a short walk from Richmond Park, the largest of the capitals eight Royal Parks. At 2,368 acres of natural beauty it is home to the beautiful Isabella Plantation, Pembroke Lodge and herds of Red and Fallow deer, providing a picturesque setting in which to picnic, go horse ridings, jogging or just take a leisurely walk. The area also offers a wide range of recreational activities including boating on the River Thames, 8 prestigious golf courses between Coombe, Wimbledon and Richmond, tennis, squash and fitness at the Roehampton Club and David Lloyd Leisure Centre (as well as the All England Club in Wimbledon), horse racing at Sandown, Ascot and Kempton Park, quality theatres in Richmond and Wimbledon and numerous superb restaurants, boutiques and shops in every direction.

There are numerous excellent local schools for all ages, private, state, and a variety of international educational establishments many within walking distance, such as Marymount International School for girls, Rokeby School for Boys, Holy Cross prep for Girls and Coombe Hill infants and juniors along Coombe Lane West. Coombe Hill Infants & Juniors is within the catchment area as is Coombe Girls School. A wealth of other schools in Wimbledon and Kingston Town centres are all within easy reach as are others in Surrey and beyond serviced by school buses with pick up points around the area such as ACS, LEH, Hampton Boys, Reeds, Felton Fleet and so many more.

Kingston Town Centre is a short car drive away, offers a daily market together with an excellent retail shopping centre providing an outstanding range of goods and services away from the London crowds. Theatres at Kingston, Richmond and Wimbledon are also popular alternatives to the West End and both towns offer excellent choices of fine pubs, restaurants and bistros.

‘Telegraph Cottage’ is renowned for its association with General Eisenhower during the Second World War. He used it as a hideaway when London was being bombed by German aircraft. It was used by Eisenhower because decoy devices were placed within Richmond Park near the Penn Ponds which omitted flames when enemy aircraft were within a six mile range. They were meant to imply factory sites that had been bombed by earlier raids, thus diverting aeroplanes from authentic targets.

However, on 16th August 1940, German bombers raided Malden and Coombe inflicting heavy casualties, with 1,300 houses being damaged and 84 being either totally destroyed or so badly damaged that they had to be demolished.

Although named Telegraph Cottage, it is unlikely that it was ever used as a message sending point on the relay chain from the Admiralty to Portsmouth. An earlier semaphore station was situated on what appears to have been later the Coombe Wood Golf Course, according to early maps. The semaphore station closed following the invention of the Morse Code by the American Samuel F.B Morse (1971-1872).

Coombe Residential provide a highly professional, courteous and informed service to both seller and purchasers alike. Often found giving excellent advice on future projects and developments, we believe that relationship building is paramount through honest communication, excellent knowledge of the Coombe area and well founded expertise.

The Sales and Lettings departments provide high quality, exclusive, secluded and executive properties to a wide range of clients. The Sales department h

Disclaimer - Property reference WIM170354. The information displayed about this property comprises a property advertisement. Rightmove.co.uk makes no warranty as to the accuracy or completeness of the advertisement or any linked or associated information, and Rightmove has no control over the content. This property advertisement does not constitute property particulars. The information is provided and maintained by Coombe Residential, Wimbledon. Please contact the selling agent or developer directly to obtain any information which may be available under the terms of The Energy Performance of Buildings (Certificates and Inspections) (England and Wales) Regulations 2007 or the Home Report if in relation to a residential property in Scotland.