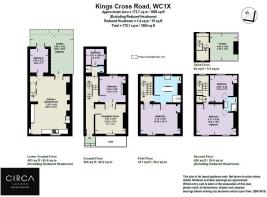 A fantastic and historic period house with a rich heritage background.


Immersed with period features throughout, this freehold house has a wealth of charm and character at every corner. Fireplaces, sash windows and exposed beams to name a few; this is somewhat of a rare home in the immediate vicinity that is new to the market.


The beauty of this Grade II listed house is the versatility on how the rooms are used, currently offering five bedrooms and three bathrooms. With just shy of 2,000 SQ FT, additional accommodation comprises of a beautiful reception room, a large kitchen/diner, pretty court yard garden, and a roof terrace on top of the house with wonderful views.


Kings Cross Road has a surprising and romantic history from the 20th back to the 17th century, from Princess Diana back to Nell Gwynn, with highwaymen and fashionable spa gardens in between.


In the 17th century the area was largely open fields. Nell Gwynn owned a house on the site called “Bagnigge House” where she entertained King Charles II. In the 18th century “health-giving waters” were discovered in the gardens and a spa was opened frequented by everyone, from the fashionable to ruffians and highwaymen. In the 19th century the spa went into decline and it was closed in 1841. Not long after this the site was redeveloped and the current terrace of houses including this home.Princess Diana was a frequent visitor to the house as patron of the preschool charity which occupied the building in the late 20th century, and planted the garden – the last survivor of this is the magnificent magnolia tree.

With offices in Southwark, Shoreditch and Hong Kong, Circa London provides an outstanding level of service to its clients both in the UK and worldwide. We are property experts with a wealth of experience who pride ourselves on our attention to detail and level of communication. We are an independent agency with an international reach that puts the client first. We value our reputation for being the best in the business, which our 5 star Google reviews bear out.

Disclaimer - Property reference 2563936. The information displayed about this property comprises a property advertisement. Rightmove.co.uk makes no warranty as to the accuracy or completeness of the advertisement or any linked or associated information, and Rightmove has no control over the content. This property advertisement does not constitute property particulars. The information is provided and maintained by Circa London, Shoreditch. Please contact the selling agent or developer directly to obtain any information which may be available under the terms of The Energy Performance of Buildings (Certificates and Inspections) (England and Wales) Regulations 2007 or the Home Report if in relation to a residential property in Scotland.