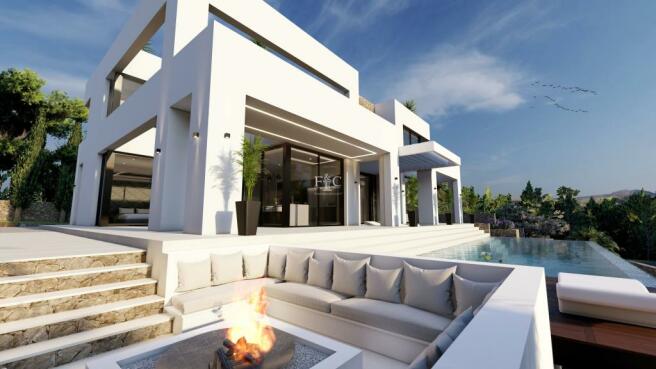 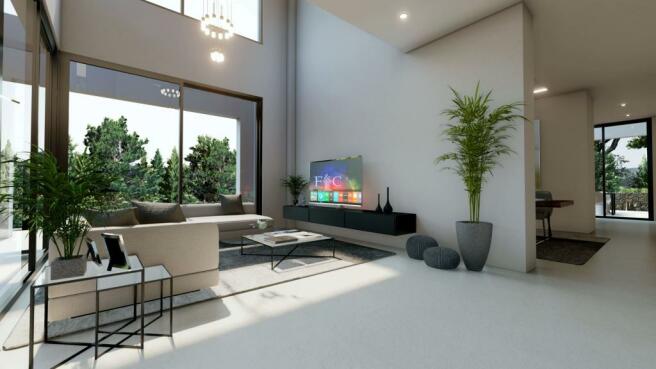 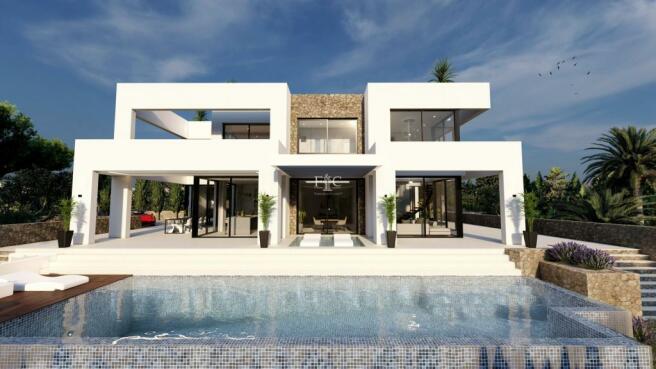 Built area: 705m2. Plot size: 1347m2. A stunning new project to build a luxury villa with panoramic sea views stretching along the coast from Moraira along to Calpe and the iconic Peñon de Ifach. With the license almost ready to start the build the buyer will have the opportunity to create and own a modern contemporary luxury villa.

A unique style villa that will certainly stand out and impress with a predominantly white façade softened and enhanced by natural stone, a feature of which is incorporated into the landscape of the garden and enclosure. The outside areas are sublime with a large cascading infinity pool with a decked sun lounger area that floats over the garden below, a shallow cool-off pool lounge with built-in sun loungers shaded by a pergola overhang, plus a sunken chill-out lounge with fire-pit. All of which light up at night to create the most wonderful ambience to enjoy the long summer days as they roll into balmy summer nights.

Designed to maximise privacy the property is in an exclusive area of Benissa Costa with proximity to some of the most attractive coves and beaches with a coastline that is an ecological walk with several stretches that you can travel practically all year round due to its climate.

The nearby Club Nautico Les Bassetes has 80 moorings and the international Blue Flag award which recognises the quality of the port and the services offered which includes bar, restaurant, sailing school, windsurf, catamaran, diving centre and nautical shop.

For golf lovers there is the Ifach golf course situated on a country estate, a challenging nine-hole course with magnificent views of the sea and mountains.

The licence for this new build project is almost ready to start. To be built south facing on a flat 1,347m2 plot with a generous build size of 705m2 and 133m2 of terracing. 4 bedrooms and 3 bathrooms to include the master bedroom with dressing area and ensuite with free standing bathtub and walk-in shower, there is also access to a private sun terrace, the main living accommodation is open plan with designated areas that include a spacious lounge with double height ceiling aspect, dining area and an integrated kitchen with counter island for cooking and casual dining. Light bright with a well-designed flow from area to area which open to the outside terracing.

Nestled between the charming and pretty town of Moraira and the bigger cosmopolitan town of Calpe, the beautiful Benissa costa is an area where you will find numerous “coves” a mixture of rocky cliffs and sandy beaches with crystal clear waters, a paradise for lovers of “snorkelling” and diving.

LOCATION Benissa is situated just off the AP7 motorway and N332 and stretches down to the coast. It is approximately a ninety minute drive from Valencia and one hour from Alicante. Benissa is one of the oldest towns on the Costa Blanca. Different discoveries suggest that there was prehistoric activity in Benissa, as evidenced by the three cave paintings in Pinos district. Old coins and amphorae indicate that the Romans too passed through this region. The origin of the place name Benissa, ‘Beni-Issa’, is considered to be the Arabic for “sons of Issa”, the name of a tribe. Benissa has a rich legacy of monuments. A landscape full of contrasts, an atmosphere filled with history. Walking through the old quarter of Benissa, perfectly preserved, you will discover a life-sized museum – cobbled streets, walls built hundreds of years ago and manor houses which transport you back to medieval times. In the heart of Benissa Old Town you will find an attractive selection of supermarkets, shops and boutiques as well as the Cathedral of the Marina Alta which dominates the town square with its palm trees and children’s playground. Market day in Benissa is on a Saturday.

Benissa has approximately four kilometres of coastline and four main beaches which are the Cala Lobella, Baladrar, La Fustera and Cala Pinet.

To the north of Benissa, in Moraira, there are further smaller beaches whilst Calpe a thriving and modern upmarket town to the south has long golden sandy beaches with a promenades, a fantastic choice of restaurants including Michelin-starred plus marinas and trendy bars and clubs.

The local Spanish schools, both primary and secondary, have children from all nationalities but if you prefer but there are International schools located a short drive away who provide a private bus service.

There are few places in the world where the northern part of a small coastline contrasts more with the south. The landscape in the south is flat and arid whereas here in the north mountains provide the backdrop to much greenery, orange groves, olive trees, vineyards, almonds, and cherries. An area where you will find many beautiful blue flag Mediterranean beaches, sand dunes, watch towers, natural coves, fishing ports and marinas where luxury yachts are moored. Inland you can still find charming Spanish villages and a part of Europe where life goes on the way it has for decades, with siestas religiously adhered to, and local customs and culture still very much a part of everyday life. It is a unique and very special Region in Spain, a stunning area of natural coastal and inland beauty with breath-taking landscapes offering a taste of “Real Spain”, an area dubbed Spain's “Jewel in the Crown” by the British travel Press.

The Costa Blanca North encompasses a region that includes the desirable towns of Altea, Calpe, Benissa, Teulada-Moraira, Benitachell, Javea and the city of Denia, also for the buyer seeking peace and tranquillity, the enchanting inland villages situated in the Jalon and Orba valleys where the land is never far from the sea and coastal resorts are within a 15-to-30-minute drive. There is a first-class range of real estate for sale in Costa Blanca North, from luxury beachfront penthouses to prestigious country properties, and from spectacular coastal villas to apartments.

Costa Blanca North is one of Spain´s fastest growing golfing destinations with first class golf course and 5-star golf resorts with both Seve Ballesteros and José Maria Olazábal having both played a part in designing some of the Region´s courses. There is a tennis academy, ATF, set up by former world professional tennis played David Ferrer from Javea. The Equestrian Centre Oliva Nova is host to the international show jumping competitions MET with competitors from all over the world. The Region is the area of choice for many pro cycling teams and ten of the eighteen World Tour teams have chosen this area for their training camps. Looking to Ski in the winter you have the ski resorts of Javalambre and Valdinares in Teruel, only 2hr 30 minutes away enabling you to drive up to ski in the morning and still be back home in the afternoon should you want to enjoy winter skiing and the winter sunshine . With its 125 km coastline, the Costa Blanca North offers a wide variety of trendy upmarket marinas and yacht clubs, sailing clubs and an abundance of water sports.

What is unique about the property market in Costa Blanca North, Spain?
The Costa Blanca North is classed a very exclusive area within Spain. The British, Germans and Dutch have a long-running love affair here with a Region that is classed as one of the wealthiest in Spain attracting not only the well-heeled from Madrid, and Valencia, who have second homes here but more and more affluent expats from all across Europe and beyond, including North America, the Middle East and Eastern Europe.

Why buy a property with Fine & Country Costa Blanca North?

Fine & Country Costa Blanca North are part of the Fine & Country global network of over 300 offices around the world, specialising exclusively in the marketing and sale of luxury residential property to include resale, new build, and investment opportunities.

This is a property advertisement provided and maintained by Fine and Country Costa Blanca North, Denia (reference 210263_FCD420) and does not constitute property particulars. Whilst we require advertisers to act with best practice and provide accurate information, we can only publish advertisements in good faith and have not verified any claims or statements or inspected any of the properties, locations or opportunities promoted. Rightmove does not own or control and is not responsible for the properties, opportunities, website content, products or services provided or promoted by third parties and makes no warranties or representations as to the accuracy, completeness, legality, performance or suitability of any of the foregoing. We therefore accept no liability arising from any reliance made by any reader or person to whom this information is made available to. You must perform your own research and seek independent professional advice before making any decision to purchase or invest in overseas property.