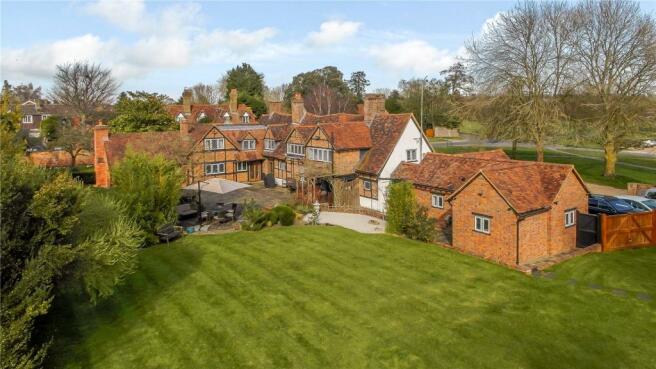 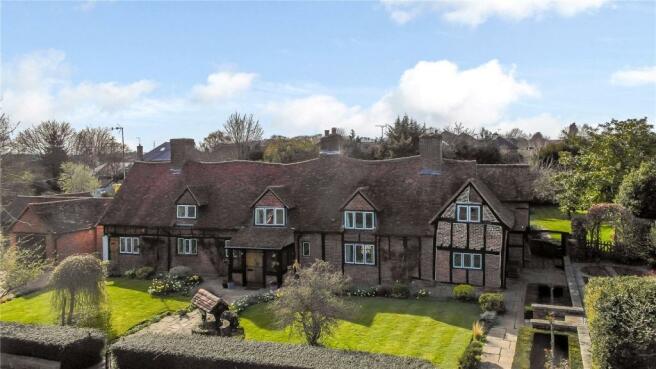 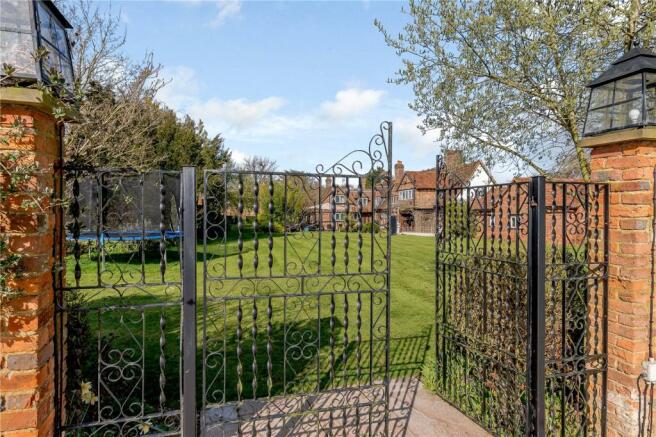 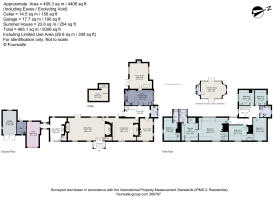 Charming and impressive period house on the edge of The Common.

Bees Nest Cottage is a most delightful Grade II listed period family house set on the common within this sought after Hertfordshire village. Five cottages were made into one house in the 1940's using wall paneling, staircases and other features from the Luton Hoo country estate.

With over 4,400 sqft of accommodation set over two floors, this beautiful home offers flexible living space and features many exposed wall and ceiling timbers throughout the principal rooms. The main sitting room has two original fireplaces and creates an impressive entrance to the house. The dining room also boasts a significant fireplace which also features a log burner, as do the two home offices. All four rooms have stunning parquet flooring running throughout good height ceilings, pretty leaded light windows and original features.

The kitchen/breakfast room is well fitted with an Aga and a range of Smallbone Maple wood wall and base units and Butler's sink. From the kitchen a door leads through to a lovely bright and airy family room which features, in particular, a solid oak floor and vaulted ceiling plus disco ball and lights!. At the other end of the house is a Gym/games room, utility room and the garage.

Upon reaching the first floor, six good sized bedrooms can be found with the main bedroom taking centre stage. This bedroom enjoys views over the common, a large dressing room and en suite bath and shower room, whilst bedroom two also features an en suite.

There is a very large rear garden comprising different area including a 1940's rose garden, orchard and football area and features a delightful recently refurbished heated summerhouse which could be used as a separate home office, for parties viewing the cricket on the common or as a playroom. Further within the gardens is a superb outdoor swimming pool with a heat exchange pump installed. It is surrounded by lovely stone paving and a landscaped seating area with lighting. There is a pump house and changing room too, and beyond the pool, a further section of garden with greenhouse, large shed and a woodland area can be found and enjoyed.

The location of Bees Nest Cottage is truly delightful and boasts a prime position overlooking the common. The sense of openness and space is most apparent and is almost considered as an extension to the property itself.

The historic village of Redbourn has been settled since at least the Saxon times and is recorded in the Domesday Book. Its Parish Church, St Mary's, was built in the early 12th century, whilst to the southwest of the village, a site of an Iron Age hill fort was found, whilst to the north, a site of Roman temples was also discovered.

During the coaching era, Redbourn was known as the "Street of Inns", with at least 25 pubs and inns at its peak, but in 1838 the opening of the railway from London to Birmingham sounded the death knell of stagecoaches. A variety of local pubs still remain and are popular with locals and visitors alike.

Today, the Redbourn cricket club is one of the oldest village clubs in England. Cricket has been played on the common for more than 180 years and continues to be played weekly.

A branch railway line—known as the Nicky Line—from Hemel Hempstead to Harpenden passed through Redbourn. The line opened in 1877 and closed in 1979. The route is now a popular and well-used and public footpath and cycle path.

Today, however, Redbourn could not be located any better for those who wish to live a ‘country life’, yet need to commute to London or the north. Harpenden town centre, with its mainline station (St Pancras International from 27 minutes) is less than 4 miles distant, whilst for those travelling by car, the M1 motorway (J9) is only 4.4 miles distant.

The village centre of Redbourn is less than half a mile away and offers a comprehensive range of shops, a post office and a popular primary school.

Disclaimer - Property reference CLI201102. The information displayed about this property comprises a property advertisement. Rightmove.co.uk makes no warranty as to the accuracy or completeness of the advertisement or any linked or associated information, and Rightmove has no control over the content. This property advertisement does not constitute property particulars. The information is provided and maintained by Savills, Harpenden. Please contact the selling agent or developer directly to obtain any information which may be available under the terms of The Energy Performance of Buildings (Certificates and Inspections) (England and Wales) Regulations 2007 or the Home Report if in relation to a residential property in Scotland.