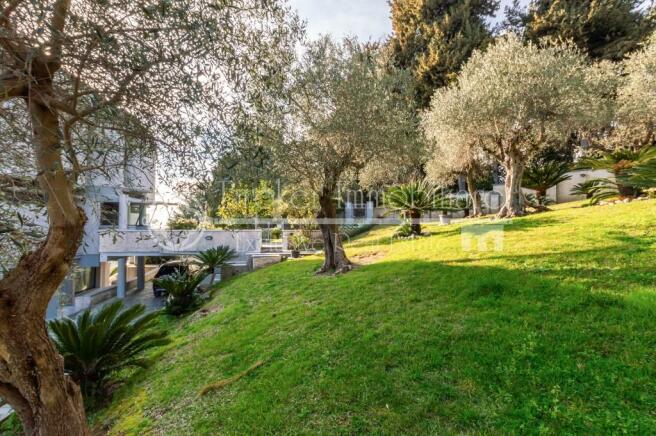 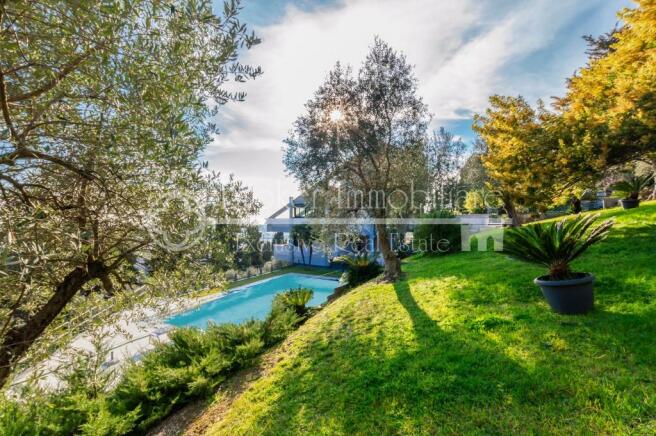 VILLA AIRON - Modern villa for sale on the hills of Versilia, with swimming pool and stunning views of theTyrrhenian coast.
The modern architectural lines of this luxury villa, for sale in Tuscany, fits into the beauty of the surrounding landscape, maintaining the sloping of the hills close to the property.
The designer carefully planned the harmonious placement of the building in the natural environment, minimizing the visual impact, thanks to the creation of a large sloping roof
and inserting, at every level, large terraces and livable outdoor spaces overlooking the sea of Versilia. The villa is located in a fully fenced park of about 3700 square meters, where there is a large swimming pool with sea view bordered by a solarium area. Developed on three floors above ground and a basement, for a total of about 325 square meters, the villa is surrounded by terraces, porches and can be accessed through three independent entrances; two on the ground floor and one, the main, on the first floor.
Crossing the main entrance you are enchanted by the wonderful sea view of the entire living area, of about 100 square meters, where there is a large open space in which are inserted the relaxation zone with fireplace and the dining area. All this living area is equipped with large windows that make it particularly bright and that externally connect the two terraces overlooking the sea, equipped with sun blinds to be use on hot summer days. Also at this level, through a hallway we find the functional kitchen, with a balcony as well as a bathroom with shower.
Going up to the second floor, through the staircase in cardoso, which connects all the levels of this modern villa for sale in Versilia, you reach the hallway which opens onto two comfortable double bedrooms, equipped with walnut furniture in yatch style. Both with a comfortable terrace overlooking the sea, so that everyone can enjoy his privacy. A spacious bathroom with whirlpool tub and shower completes this level.The ground floor can be reached from the internal staircase or through the two entrances from the outside, so it could also be used as an independent apartment in case of multiple families.On this level there are the large laundry room with exit to the porch that could easily be used as a second kitchen, two double bedrooms overlooking the large terrace overlooking the sea, a medium room currently used as a study and gym, a bathroom with shower and a practical closet.The villa is equipped with a photovoltaic and alarm system.
This important property, for sale on the hills of Massarosa, is completed by the land of about 3700 square meters, partly cultivated with over 40 olive trees and various fruit trees, and partly used as a garden with a cottage for sheltering summer furnishings, a barbecue , a room used as a storage for garden equipment and a large swimming pool with sunbathing area. A large space for the covered shelter of at least 2 cars is connected to the road and, through the driveway entrance, additional parking spaces can be used inside the property.
The important villa for sale on the hills of Versilia, is an excellent investment for anyone who wants a modern atmosphere, whitin walking distance of the major facilities, but surrounded by nature.

Modern villa, for sale on the hills of Massarosa, in a panoramic position and just a few minutes from all facilities as well as from the renowned beaches of Versilia. The core services are about 1 km from the house, the sea and the beaches of the marine coast of Viareggio and Versilia, about 7 km away, can be easily reached in 10 minutes by carMassarosa, town of Roman origins, is a major tourist, agricultural and industrial centre, located to the west of Viareggio between Sarzanese road and Massaciuccoli lake and has a territorial structure spread among hills, plains and lakes. The area is dotted with a lot of exclusive villas (dating back to the 16th and 19th centuries), villages and historical churches. Massarosa is also well known for its natural beauties, especially for the famous Massaciuccoli Lake inside the natural Park of Migliarino, San Rossore, Massaciuccoli. The park extends along the coastline between Pisa and Lucca and also includes the former Presidential Estate of San Rossore, the pinewoods of Tombolo and Macchia Lucchese. In 2005 the Park was awarded with the European Diploma of Protected Areas and, thanks to its rich fauna, is a LIPU oasis, as well. The most outstanding hilly areas, if considered from a panoramic point of view along the shoreline, are Corsanico, Bargecchia, Mommio Castello, Montigiano and Pieve a Elici, where one can appreciate breathtaking natural sights, historical and artistic beauties, immersed in the greenery and tranquility. The hilly hinterland allows to go walking, cycling or horse riding on the old paths of the pilgrims along the Via Francigena.

Situated in two of the most renowned coastal towns in Versilia along the Tuscan Riviera, in Forte dei Marmi and Viareggio, the offices of Broker Immobiliare have been recently renovated and furnished with refined style, resulting in an elegant and classy environment, a suitable place where to start your personal real estate research. The office in Forte dei Marmi is located in Viale Morin within the prestigious neighbourhood of Roma Imperiale, while the office in Viareggio is situated just cl

This is a property advertisement provided and maintained by Broker Immobiliare Exclusive Real Estate, Forte Dei Marmi (reference AIRON) and does not constitute property particulars. Whilst we require advertisers to act with best practice and provide accurate information, we can only publish advertisements in good faith and have not verified any claims or statements or inspected any of the properties, locations or opportunities promoted. Rightmove does not own or control and is not responsible for the properties, opportunities, website content, products or services provided or promoted by third parties and makes no warranties or representations as to the accuracy, completeness, legality, performance or suitability of any of the foregoing. We therefore accept no liability arising from any reliance made by any reader or person to whom this information is made available to. You must perform your own research and seek independent professional advice before making any decision to purchase or invest in overseas property.