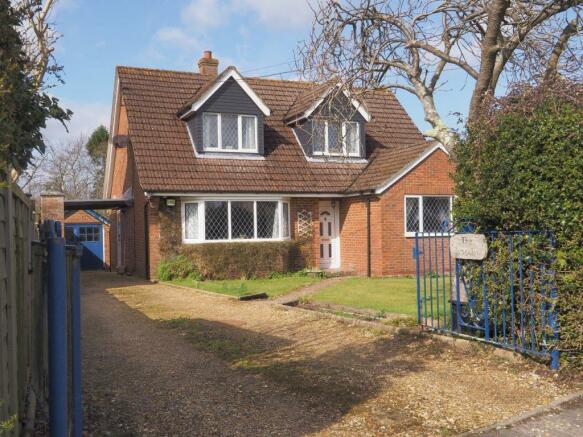 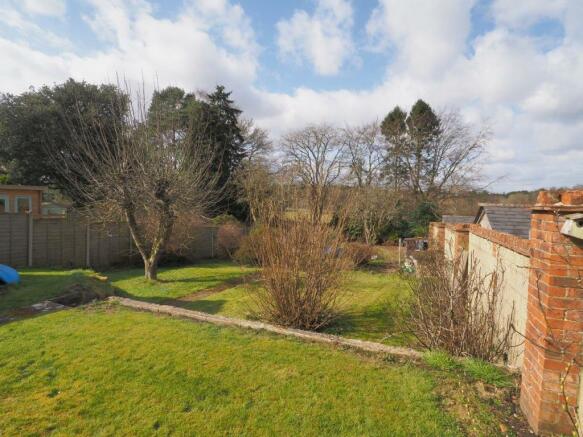 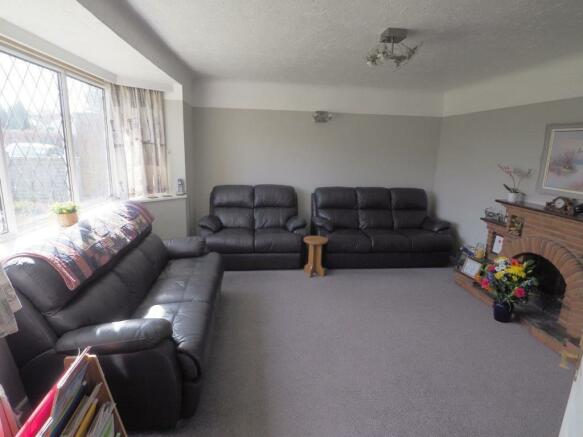 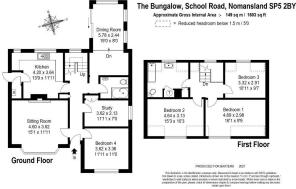 Located within the New Forest village of Nomansland, The Bungalow enjoys a pleasant setting with a large mature garden, detached garage and private drive with parking for several cars.

The property was originally constructed as a bungalow in 1964 with a single storey addition to the rear in the early 1980s followed by a comprehensive loft conversion in 2002.  The resulting accommodation is both well planned and spacious with 4 double bedrooms, 3 reception rooms (sitting room with bay window and open fireplace), a large kitchen, large family bathroom (first floor) and a separate shower room and cloakroom (ground floor).  The Bungalow is fully double glazed and centrally heated via a gas fired boiler (replaced 2016).  The total internal living space is approximately 1600 sq.ft.  There is no doubt that The Bungalow offers huge scope and potential for updating and improving.

To the front of The Bungalow is a large lawned garden screened by a tall mature hedge.  Metal gates lead to the drive which in turn gives access to a carport and garage.  The rear garden is an excellent size with areas of lawn, shrubs and flower beds all enclosed with established boundaries.  The view to the rear is outstanding.

Nomansland is a small village in Wiltshire, England, close to the county border with Hampshire and part of the parish of Landford and lies about 3.5 miles (6 km) southeast of Redlynch and 10 miles (16 km) southeast of the cathedral city of Salisbury.  The village is within the boundaries of the New Forest National Park, which offers more than 140 miles of tracks and footpaths for walking and cycling, and is close to Pipers Wait, the highest point in the New Forest.  Local amenities include a post office in Landford and a NISA at West Wellow.  Supermarkets are in Salisbury, Totton and Romsey.  The local school is the New Forest Primary School which has two sites: for younger children at Landford and older children at Nomansland.  A Primitive Methodist chapel was built in the mid-19th century and replaced by a new building on the green in 1901.  This became Nomansland Methodist Chapel and is still in use; a pre school is held there during the week.  The village has a pub, the Lamb Inn, and a French restaurant, Les Mirabelles.  The M27 is just to the south via the A36. Salisbury has an excellent range of social, educational (private and state including two grammar schools) cultural and leisure amenities, extensive shopping facilities, restaurants and the historic Charter market.  The theatre, arts centre and cinema are all located in the city centre and Salisbury District Hospital just to the south.  Mainline rail services to London (Waterloo) are at Salisbury and Southampton and there are airports at Bournemouth and Eastleigh.

Located within the New Forest village of Nomansland, The Bungalow enjoys a pleasant setting with a large mature garden, detached garage and private drive with parking for several cars.

The property was originally constructed as a bungalow in 1964 with a single storey addition to the rear in the early 1980s followed by a comprehensive loft conversion in 2002.

DIRECTIONS: From the cathedral city of Salisbury proceed in a south easterly direction along the A36 for approximately 11 miles turning right by The Landford Poacher signposted Landford, Hamptworth and Nomansland into Lyndhurst Road.  Proceed through the village of Landford and turn right at the crossroads into Forest Road signposted Nomansland.  Proceed through the cattle grids and follow the road turning right into North Lane (just before Les Mirabelles restaurant).  After a short distance take the next turning on the right into School Road; The Bungalow will be found towards the end of the road on the left hand side.

Baxters are a proactive, independent estate agent serving Salisbury, Andover and the surrounding areas. We cover all aspects of residential sales, lettings, land sales, planning and new homes. You can be certain of receiving quality service backed up by 30 years local experience when you appoint Baxters.

Disclaimer - Property reference BXSCC_616584. The information displayed about this property comprises a property advertisement. Rightmove.co.uk makes no warranty as to the accuracy or completeness of the advertisement or any linked or associated information, and Rightmove has no control over the content. This property advertisement does not constitute property particulars. The information is provided and maintained by Baxters Property & Land Agents, Salisbury. Please contact the selling agent or developer directly to obtain any information which may be available under the terms of The Energy Performance of Buildings (Certificates and Inspections) (England and Wales) Regulations 2007 or the Home Report if in relation to a residential property in Scotland.