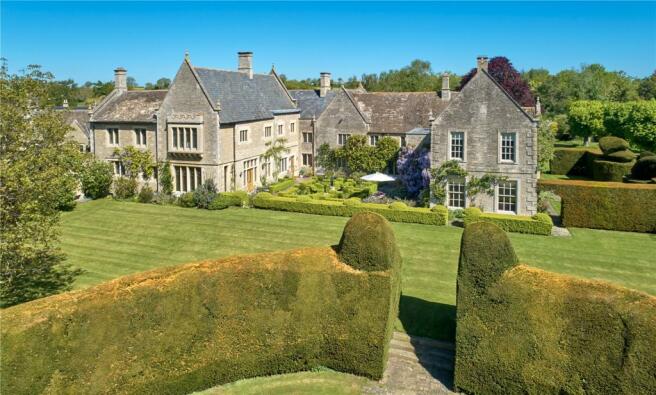 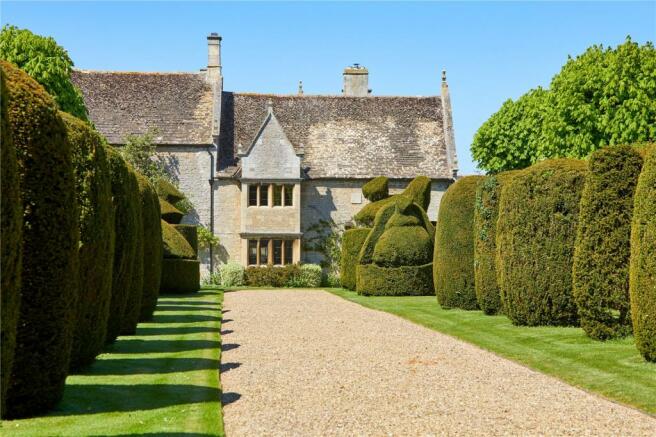 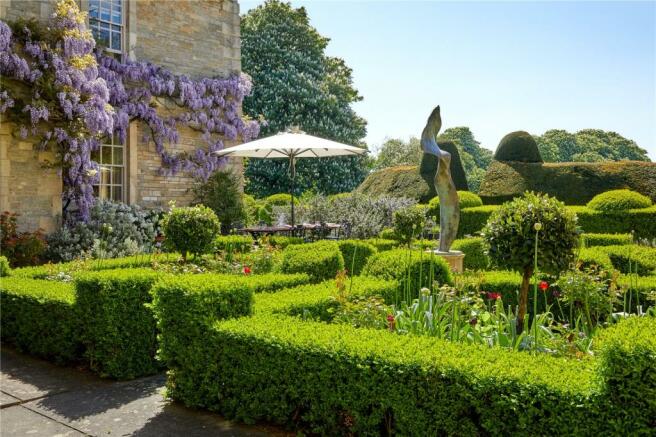 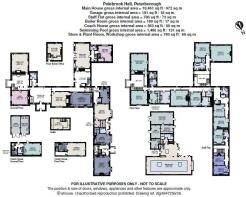 Polebrook Hall is a beautiful and impressive Grade II Listed, 17th century country house set in the heart of the rural village of Polebrook.

Polebrook Hall is a beautiful and impressive Grade II Listed, 17th century country house set in the heart of the rural village of Polebrook. It is a very private property, secluded within its own extensive gardens and grounds. It has elevations of square coursed limestone with a Collyweston slate roof and stone mullion windows with romantically decorative leaded lights. The property is set back from the village behind a high stone wall. Ornate cast iron gates set between two stone piers surmounted by carved figurines open into a large open gravelled courtyard enclosed by a tall mature Yew hedge on the eastern side and the wing containing the Staff Flat and the Coach house on the western flank. Polebrook was originally built in the 17th Century but underwent renovations and additions in both the 18th and 19th Centuries as well as in the last decade. On the south side of the house is a garden courtyard overlooked by the main rooms in the house with a terrace for outdoor eating, opening onto the extensive gardens which are totally private and not overlooked by any other property, which in turn look out over open countryside. The accommodation has been extensively upgraded and remodelled by the present owners to a very high standard, while retaining and enhancing the historical features of the house, which remains impressively unspoiled, and which has working fireplaces throughout the ground floor of the house. The accommodation is further supported by excellent additional accommodation, in the form of a connecting Staff Flat in the wing, and a detached two-storey Coach house by the front gates, which present rental income opportunity. The house is served by excellent broadband connection, has a satellite television connection, and Cat 6 cabling throughout. No expense has been spared by the current owners who have laid oak flooring, installed marble in the bathrooms, Italian granite in the kitchen, high quality bathroom fittings, and a new oak staircase and panelling in the garden hall.

As can be seen from the enclosed plan of the gardens and grounds the gardens have been laid out with an eye for scale and detail. The principal areas of the garden have been divided into individual ‘Garden Rooms’ by large mature Yew hedges creating sense of surprise and providing many distinctive areas to be enjoyed. Overall there is an
abundance of plants and shrubs including many rare species which add depth to remote areas of the garden and enhance the feeling of privacy. The comprehensive and well maintained gardens at Polebrook were recast in their design by Sir Reginald Blomfield early in his career; some of the features being laid out in conjunction with the design of the house. The principal lawned area to the southern side of the house has a large semicircular Yew hedge with a break in the middle that directly corresponds to the passageway in the house between the Staircase Hall and the Drawing Room. The gravel carriageway extending to the east with its trimmed yews and the pollarded Horse Chestnut avenue date from this period. To the east of the house, past a lawned area with a stone summer house at the northern end, is a rose and lavender garden as well as a formal sunken garden with a reflection pool and two large Willow trees. This formal area was designed by Elizabeth Banks Associates who have won numerous Chelsea Medals. Beyond this “room” is a further pond leading to the boundary. On the northern border is a raised orchard divided from the pond by a low wall and to the south of the pond is a woodland garden beginning a mixed woodland walk around the property’s perimeter, following the brook which marks the boundary. Beyond the principal lawned area to the south of the house, and separated from it by a brick Ha-Ha, lie paddocks with a Chestnut avenue running through them. West of the paddocks is the Swimming Pool complex, potager and fenced, all weather Tennis Court. Beyond this there are a number of informal ‘garden rooms’ leading into the woodland walk. (On the south side of the house is a terraced area with borders and box hedging creating a lovely area from which to enjoy both the sunshine and the view).

Polebrook Hall is situated on the south side of the charming, east Northamptonshire village of Polebrook, which sits near the River Nene approximately two miles south east of Oundle. Its gardens are extensive and south facing over open countryside. Polebrook has an award-winning village primary school, as well as a public house and Grade 1 listed Church dating from the late 12th century. The village is well placed, having excellent communications to points east and west via the A605 linking to the A14 and the A1. The A1 is 7 miles to the east, and the A14 within eight miles to the west. Peterborough is 14 miles to the east where regular mainline trains take from about 50 minutes to London Kings Cross. There are also direct trains through London to Gatwick from Peterborough station. Regular trains to London also run from Kettering and Corby.

Polebrook Hall is the quintessential English Country House, dating from the reign of James 1, with later additions in 1719 and the 1890s, and benefitting from a significant upgrade and modernisation by the current owners.

Polebrook stands on a small limestone outcrop in a slightly elevated position overlooking a tributary of the Rivere Nene. The village dates features in the Doomsday Book as Pochebrok or Pohebroc. Polebrook Hall is entered in Sir Nikolaus Pesvener’s Buildings of England for Northamptonshire as a Jacobean property. The Jacobean origins are borne out by a date of 1627 featured within panelling of the library in the house, although it is possible that an earlier house existed on the site. The property has had later additions, principally in the early eighteenth century and subsequently the late nineteenth century. Particular features are the panelling in the library and dining room, and the stained glass in the mullion windows in the dining room, library and kitchen.

The occupants of the hall have included a brewer by the name of John Smith, who occupied the house in the nineteenth century, and the house was part of the estates of the Dukes of Montagu from the late sixteenth century. It is believed that the Rothschilds acquired the Hall in the late nineteenth century and used the Hall as a base whilst Ashton Wold was constructed. In 1893 the property was sold to Major AFH Ferguson (great grandfather of the present Duchess of York) and his brother, and Major (later General) Ferguson lived at the property until 1949. It was he and his brother who added on the western end of the Hall and its wing in the late nineteenth century, and his coat of arms is over the front door.

STAFF FLAT - The Staff Flat has its own front door but also connects internally with the Hall. It is in excellent decorative condition, has a small garden and parking outside. Ground floor: Entrance Hall, open plan sitting room/kitchen. First floor: two bedrooms, shower room.

COACH HOUSE - This is a detached property beside the gates of the Hall, and was converted from an outbuilding by the current owners in 2012. It is light-filled and in excellent decorative condition. Ground Floor: Large double bedroom, bathroom with bath and shower above, utility room with washer and dryer. First Floor: Open plan kitchen, pantry, sitting room. Parking.

GARAGE AND BOILER ROOM - Accessed from the village road through a separate driveway is an additional part-owned courtyard containing the entrance to the Staff Flat as well as the access to the Coach house. A brick built garage with asphalt felt roof, and the boiler room, also sit in this Courtyard.

OUTBUILDINGS - Within the gardens and grounds further outbuildings include: A brick and slate Swimming Pool pavilion comprising a Garden Store, Workshop, Stable and Plant Room housing the heating and filtration units for the Swimming Pool.

POOL PAVILION - The Pool Room houses a heated indoor swimming pool, with Dining Area, Kitchenette, Changing Room with Shower Rom, Japanese Bath, Sauna and separate WC. A particular feature is the shape of the pool and the dramatic lighting within the building. The pool room opens out onto the private garden to the west of the building

GREENHOUSE - Brick base with timber frame.

Disclaimer - Property reference SSG200261. The information displayed about this property comprises a property advertisement. Rightmove.co.uk makes no warranty as to the accuracy or completeness of the advertisement or any linked or associated information, and Rightmove has no control over the content. This property advertisement does not constitute property particulars. The information is provided and maintained by Savills, Country Department. Please contact the selling agent or developer directly to obtain any information which may be available under the terms of The Energy Performance of Buildings (Certificates and Inspections) (England and Wales) Regulations 2007 or the Home Report if in relation to a residential property in Scotland.