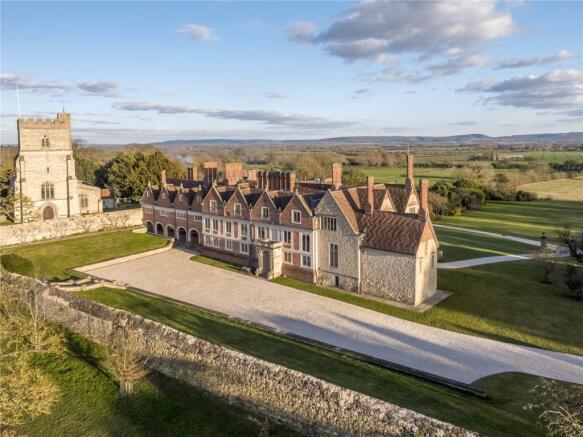 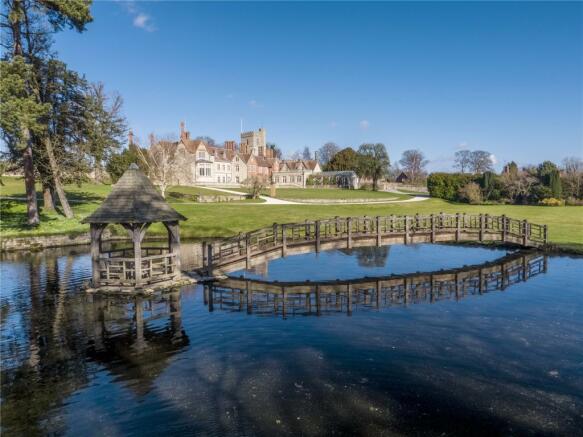 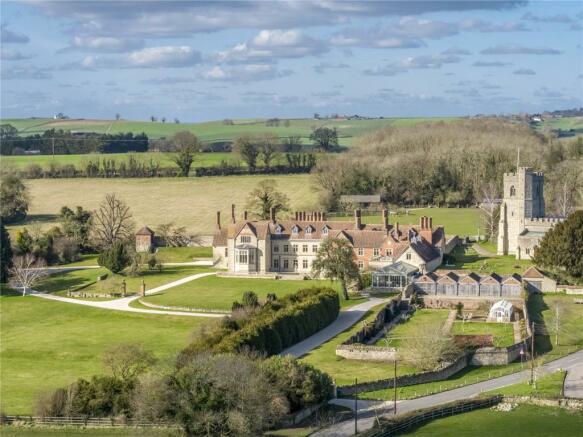 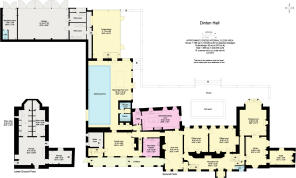 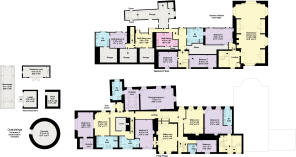 Dinton Hall is a highly impressive and beautifully restored Grade II*listed country house, of not only great historical interest but also architectural importance. The house is believed to date from 1492 and enlarged and substantially remodelled in the late 16th Century, added to in the 17th Century, 18th Century and again in early Victorian times. Built of traditional stone and brick under tile roofs, with stone mullioned windows, the house has a north front featuring a beautiful 5 bay ground floor colonnade and a west wing reputed to have been a chapel.

The interiors display some beautiful original features including two Jacobean style staircases, some 18th Century and 19th Century panelling and fine fireplaces. The north front has some 16th Century Flemish armorial glass and some medieval English stained glass. The house is approached over a sweeping gravel drive guarded by a Grade II listed dovecote, and faces mostly south over its gardens and parkland beyond.

In recent years the house has been extended and refurbished, new services installed and an indoor swimming pool and orangery added. It is now a private family home of exceptional quality ideal for home working, family living and entertaining in equal measure

Swimming pool complex A superb new air conditioned limestone indoor pool room approximately 18 metres in length, containing a 14 metre limestone pool. There is a lounge area to one side, opposite is possibly the most intricate and detailed mosaic of its size in the world depicting The Battle of Issus between Alexander the Great and Darius III, the Persian King. At one end is a frieze being a copy of the “Alexander sarcophagus” in Istanbul. Changing room and sauna.

Gardens and grounds Dinton Hall is an imposing Country House built of stone and brick with large leaded light windows offset by much leadwork of exceptional quality. The house is approached off the village lane through imposing wrought iron gates mounted on substantial stone pillars with a wide gravel driveway sweeping through the gardens, passing mature shrubs, numerous specimen trees. From February to April there are carpets of snowdrops, crocus, aconites, daffodils, bluebells and other wild flowers. A stone dovecote dating from the 13th Century stands to one side of the drive. Adjacent to the forecourt parking area is a brick and stone summerhouse with a seating area and log store beneath. This overlooks the driveway towards the two ponds. The first pond has a wooden bridge leading to a central gazebo. The driveway continues to the front of the house which is enclosed by high stone walls beyond the lawns surrounding it. The forecourt leads into the cloisters and thence to an ancient door to the churchyard.

A branch off the main driveway runs south of the house and then to a second set of wrought iron gates to the Ford road. The gardens are populated with a selection of specimen trees. Within a tree hidden from the outside is a wooden treehouse. To the south of the house is a large formal terrace containing an ornamental pond with a statue of Bishop Odo. The balustraded terrace leads round to a further seating area and thence to an arbour outside the Orangery, from where french doors open onto terrace. Beyond the Orangery is a cobbled fan courtyard leading to the garaging. It overlooks the walled garden with its selection of fruit trees, vegetable and flowerbeds and a summer house to the far end.

The layout is a “typical ensemble of gardens in traditional leisure grounds suited to that of a rural manor house with medieval origins”. The key features of the gardens were laid out in the 18th century by Sir John Vanhattem and his successors in the 19th century who added some of the buildings and created the parkland and water features.

Dinton Hall is situated in an elevated position next to the 13th Century Church, and to the east of Dinton with far reaching views to the Chilterns. In the neighbouring village of Westlington is the Seven Stars public house and La Chouette for fine dining. There are extensive services available in both Aylesbury and Thame, whilst Oxford has an excellent range of shops, theatres and hospitals and is about 11 miles to the west. There are excellent schools in the area including Ashfold School, The Dragon, Summerfields, Cothill and The Manor. Secondary Schools include Oxford High, Headington, St Edwards and Magdalen College.

Dinton Hall is well located for communications. Haddenham and Thame Parkway is a short drive with a regular mainline service to London Marylebone taking from 37 minutes. The M40 is 11 miles to the south and the M1 is 23 miles to the east, linking up to the national motorway networks and London. Sporting opportunities in the area include Golf at The Oxfordshire. The renowned Le Manoir aux Quat’Saisons is a short drive, whilst racing is available at Ascot and the area provides excellent walking opportunities.

The Manor at Dinton was mentioned in the Domesday Book. It was gifted to Lord Odo, Bishop of Bayeux, by his brother, William the Conqueror. Although there are multiple changes of ownership and the hall is of medieval origin with some remnants of 14th Century work, it is recorded that Archbishop Warham in the 16th Century rebuilt it. The Verney family owned the property in the 15th and 16th Century, but in 1604 it was sold to Simon Mayne whose son, also Simon, was MP for Aylesbury and a Judge. He was active in national politics during the civil war and a friend of Oliver Cromwell. Cromwell’s sword that was used at the Battle of Naseby is still at the hall.

When King Charles I was executed in 1649, Mayne was one of the 59 Regicides who signed King Charles’ death warrant. The citation reads that the King was beheaded for “treason and other crimes”. Allegedly the executioner was one John Bigg, who was the clerk at Dinton Hall and became known as the Dinton Hermit. One of his shoes remains at the hall whilst the other is at the Ashmolean Museum. During the restoration, Mayne was accused of regicide, imprisoned in the Tower of London and died after falling ill in 1661. His son recovered possession of the Manor, but in 1727 it was sold to Sir John Vanhattem. It was he who was responsible for the development, planting of the Estate and landscape.

In 1789, Rebecca Vanhattem, the daughter of Sir John, married Reverend William Goodall. It stayed in the Goodall family until 1918 when it passed to Sir William Currie, who died in 1961. The current owner has renovated and refurbished the hall to an immaculate standard.

Disclaimer - Property reference LAC160153. The information displayed about this property comprises a property advertisement. Rightmove.co.uk makes no warranty as to the accuracy or completeness of the advertisement or any linked or associated information, and Rightmove has no control over the content. This property advertisement does not constitute property particulars. The information is provided and maintained by Savills, Country Department. Please contact the selling agent or developer directly to obtain any information which may be available under the terms of The Energy Performance of Buildings (Certificates and Inspections) (England and Wales) Regulations 2007 or the Home Report if in relation to a residential property in Scotland.