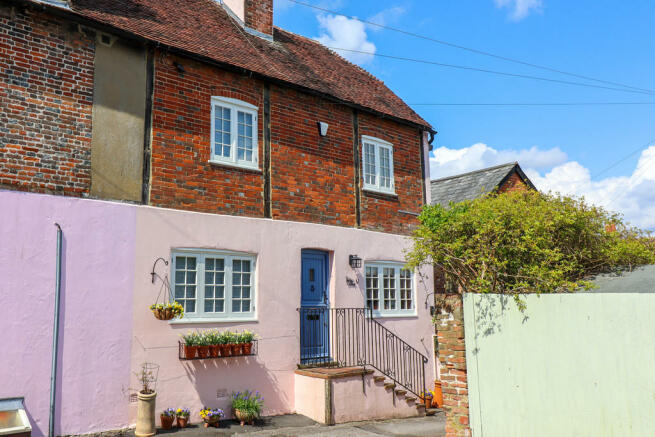 A delightful townhouse, tucked away in Brandy Mount, in the heart of Alresford's conservation area. Pedlars Cottage is conveniently located just two minutes' walk from the shops and facilities in the town centre. It is an individual, period property, with a great deal of character and charm and, unusually for the town centre, is not listed. The property has been renovated and improved, and includes a new stable front door, replacement windows and French doors, a new kitchen and new shower room. The accommodation comprises an inviting living room, an open-plan kitchen/dining room, two bedrooms and a shower room. Notable benefits include the pretty courtyard garden, the off-street parking space and the garage, which is a rarity in properties in the town centre.

The property is approached from a small lane off East Street, which leads up to Brandy Mount House. Some steps lead up to the front door, which opens into the kitchen/dining room. The kitchen features a range of fitted units and worktops, with built-in appliances comprising an eye-level Bosch oven and microwave, a Bosch fridge/freezer, a washing machine, drier and dishwasher. There is a dining area with space for a table and chairs, and French doors which open to the pretty courtyard garden. The living room has a wood-burning stove in an attractive brick surround.

The main bedroom is a sizeable double room, with a fireplace and built-in wardrobes. The second bedroom is at the front of the property and has a built-in wardrobe in the alcove. The refurbished shower room has a white suite comprising a double shower enclosure, wash hand basin and wc, as well as an airing cupboard housing the wall-mounted boiler. A loft hatch allows access to the attic, which is fully boarded and has a Velux window with views of the town. In our opinion, there is the possibility of creating accommodation in the loft, subject to building regulations approval and planning permission.

Outside, steps to the side of the house lead up to a small greenhouse and through to a very pretty courtyard garden, which is enclosed by a brick and flint wall, giving the garden a degree of privacy. The garden has a paved terrace adjoining the rear of the cottage, a small lawn, and shrubs and flower beds. A notable feature is the deep well has protective railings on top. There is a garage a little further up the lane, which has an up-and-over door and mezzanine storage. In addition, there is a parking space in front.

Alresford is a beautiful Georgian town known for its variety of independent shops, restaurants and inns located in stunning surroundings on the edge of the South Downs National Park. Attractions include the Watercress steam railway, schools for infant, junior and secondary education, several churches and an active and inclusive community. The cathedral city of Winchester is about 7 miles away and there is easy access to the south coast, the midlands and London via the road network. There is also mainline rail access to London from both Winchester and Alton. Southampton airport is only about half an hour away by car.

SERVICES We understand that all mains services are connected.

Hellards is independently owned, and has been selling and letting properties in Alresford and the surrounding villages since 1988.

Wherever you may be on your personal property journey, we would love to help you. Call us on 01962 736333, or pop into our office on Broad Street in the centre of the town, to discuss your property needs.

Disclaimer - Property reference 100820005341. The information displayed about this property comprises a property advertisement. Rightmove.co.uk makes no warranty as to the accuracy or completeness of the advertisement or any linked or associated information, and Rightmove has no control over the content. This property advertisement does not constitute property particulars. The information is provided and maintained by Hellards Estate Agents, Alresford. Please contact the selling agent or developer directly to obtain any information which may be available under the terms of The Energy Performance of Buildings (Certificates and Inspections) (England and Wales) Regulations 2007 or the Home Report if in relation to a residential property in Scotland.