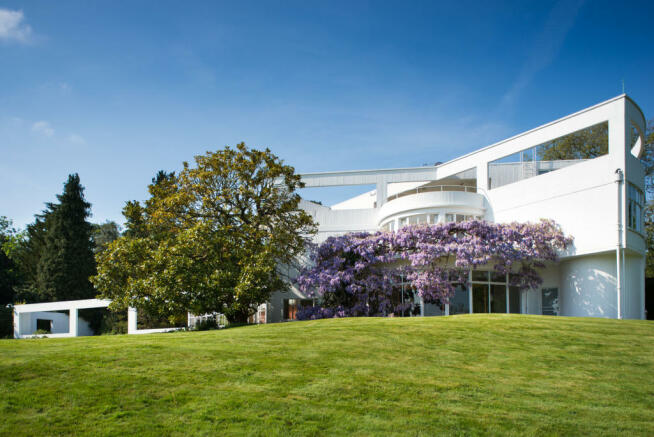 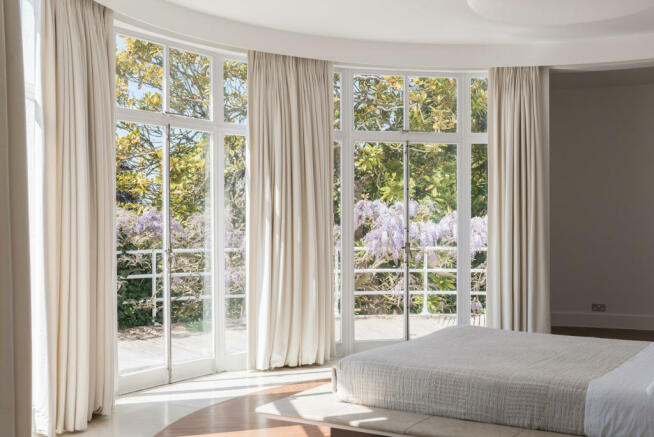 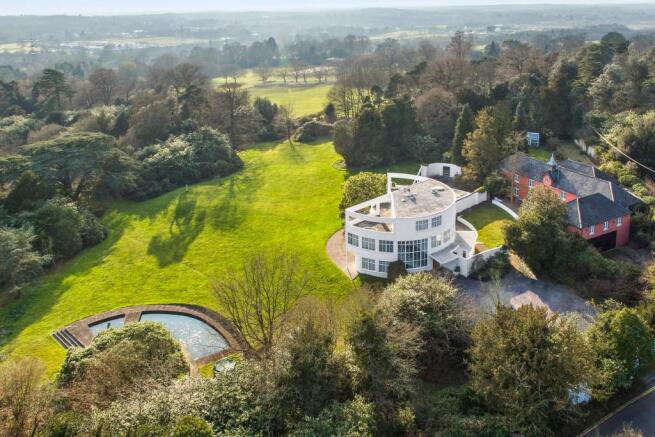 St. Ann’s Court is one of the finest and most iconic houses to have been built in Britain in the first half of the 20th century, being a very rare Modern example of the English country house tradition. It was designed in 1936 by the renowned architect Sir Raymond McGrath, in consultation with the celebrated garden designer Sir Christopher Tunnard. Besides the obvious appeal of the striking main house, Tunnard’s design (a reworking of an 18th century landscape scheme by Charles Hamilton) is one of the property’s distinctive attractions and a contributing factor to the distinguished Grade II* listing bestowed by Historic England.

The property comprises the main McGrath-designed modernist “Round House”, which extends to approximately 6,500 sq ft, and a converted 19th century “Coach House” which provides a further area of approximately 4,500 sq ft – situated within 20 meters of the main house. These two buildings, both of which have been comprehensively and immaculately refurbished by the current owners, sit atop the eight- acre site with a large parking area / driveway behind imposing electric gates leading to a secluded country road on St Anns Hill. The property has been featured in numerous movies and TV series and is sought after by top photographers.

Accommodation in the main Round House is arranged over three floors (with a plant room in the basement). The entrance hall on the ground floor is one of the most spectacular of the period and is a perfect example of what Historic England admiringly refer to as “the richness of the surviving materials… with mirror design, walnut and the exploitation of the unusual plan form [which make it] among the most interesting and complete 1930s interiors to survive in England”. The other principal rooms on the ground floor are the quite spectacular circular living room (with full height glazed doors onto the garden and wonderful copper-clad columns), the dining room, Mondrian inspired kitchen and library. Also integrated into the ground floor is a walled garden and garden room that, in true Modern style, blurs the line between the inside house and the outside landscape.

A sweeping staircase leads up to the first floor which has at its centre a remarkable master bedroom which must be among the most impressive in any 20th century house. It is circular in form, with full height glazed doors leading to a private balcony overlooking the landscaped gardens, through a 200 year old wisteria, and has a large dressing room to one side and an en suite bathroom to the other. There are three further bedrooms and two further bathrooms on this floor. The stairs then lead up to the second floor, which has two bedrooms (with a shared bathroom in between) and two wedge-shaped roof terraces with views of the grounds and the north downs.

The Coach House, Tuscan red on the outside, is largely arranged over a single floor and is used by the current owner as a creative working and living space. A proportion of the building is currently given over to a world-class recording studio which was originally built by Roxy Music’s Phil Manzanera, a previous owner of the property, and is where many of the band’s most celebrated tracks were recorded as well as work by numerous other notable artists including Paul Weller, Robert Wyatt and David Gilmour. During the refurbishment by the current owner, the studio section was redesigned by the renowned studio architect, Roger D’Arcy of Recording Architects with a large live room and a spectacular control room.

The Coach House also incorporates two studies, a large library / board room, a beautiful double-height reception space, a kitchen, a small flat for visiting artists and a large games room. The masterly touch of the award-winning architect Steve Marshall, who was at the time a director at Munkenbeck & Marshall, is apparent in many of the details throughout the Coach House. It was Marshall that oversaw the restoration of St. Ann’s Court and his scheme is a triumph of sensitive, yet progressive, conservation architecture. Marshall also designed, and got approval for, a pool house that (subject to the relevant permissions) could be built by any new owners. The Marshall pool house design can be viewed here.

During the refurbishment by the current owners, both houses were fitted with structured wiring and have around 100 CAT5e sockets in total, providing Ethernet speeds of up to 1Gbit/sec throughout both buildings. These connections are also used to distribute Sky HD services. The houses are served by a 50Mbit/sec Internet connection.

Further information on the history and construction of St. Ann’s Court, and its architect Raymond McGrath, can be found in the History section.

The grounds of St Anns Court (extending to over eight acres), are a true delight and were the subject of a vignette watercolour by JMW Turner dating from c. 1827. The landscape is wonderful combination of Tunnard’s more rational Modernist outlook and Hamilton’s Picturesque approach, intertwined with woodlands. The Round House itself was designed to reflect and enhance the landscape under Tunnard’s influence: from the terrace the garden is framed by white concrete buttresses. A number of the original 18th century features remain alongside the 1930s structures. Extensive lawns, significant trees such as the only surviving cedar, an orchard, a small lake, kitchen gardens, a rose garden, courtyards and even a Tunnard-designed semi-circular swimming pool which has been converted into a water lily pool, all can be found in these beautiful grounds.

The current owners commissioned a Japanese-inspired wooden walkway through prairie beds and wildflower meadows in an area of the garden called the ‘Wanderling’, co-designed by Chelsea award winning garden designer, Juliet Sargeant and the current owner. The grounds themselves are Grade-II* designated by Historic England and were featured in the BBC series ‘Gardens Through Time’ and in several magazines. The grounds have been designed and sympathetically maintained to encourage wildlife and the garden is full of bees, butterflies, birds and small mammals.

St Ann’s Hill Road is a desirable and secluded road on top of St Anns Hill which itself is largely a nature reserve. It is located near Chertsey, a picturesque town in the Runnymede borough of Surrey on the River Thames and the River Bourne just, 12 miles south west of central London. Transport links are excellent with the M25 easily accessible, leading easily to the M3 and M4.

Heathrow airport Terminal 5 can be reached in just ten minutes with access to Heathrow Express which takes a mere 20 minutes to Central London, (or Piccadilly Tube line which takes longer). There is also the smaller Fairoaks airport even closer for private planes. Nearby train stations are Virginia Water, Chertsey and Staines with direct services to London Waterloo.

The nearby towns of Chertsey, Virginia Water, Ascot and Windsor offer a broad range of shopping and dining opportunities and the area is particularly renowned for its private schools (Eton College, Salesian, Sir William Perkins, Papplewick, Sunningdale and St John’s Beaumont) and sporting opportunities (horse racing at Ascot, boating on the Thames and golf at Wentworth).

Disclaimer - Property reference TMH78602. The information displayed about this property comprises a property advertisement. Rightmove.co.uk makes no warranty as to the accuracy or completeness of the advertisement or any linked or associated information, and Rightmove has no control over the content. This property advertisement does not constitute property particulars. The information is provided and maintained by The Modern House, London. Please contact the selling agent or developer directly to obtain any information which may be available under the terms of The Energy Performance of Buildings (Certificates and Inspections) (England and Wales) Regulations 2007 or the Home Report if in relation to a residential property in Scotland.