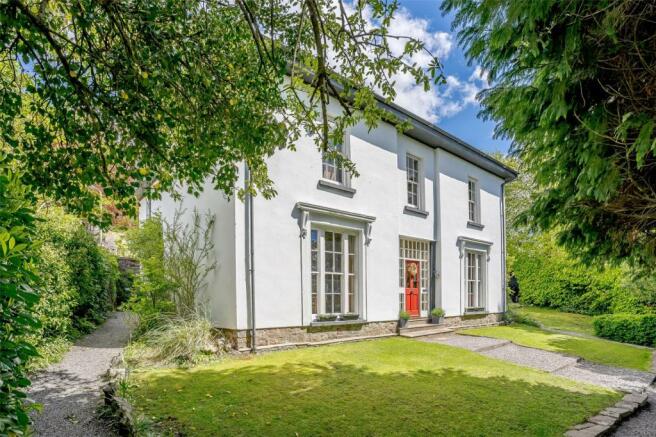 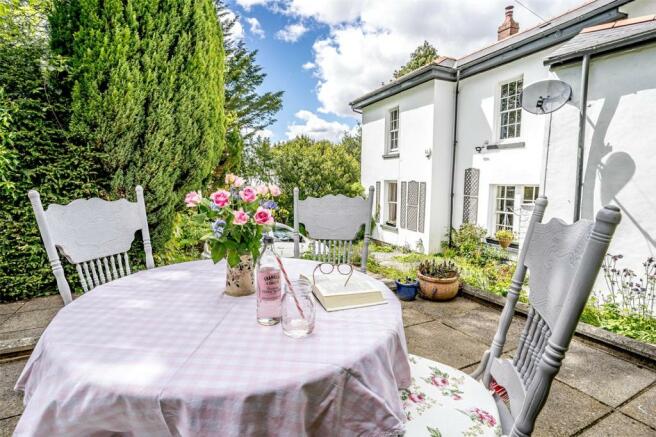 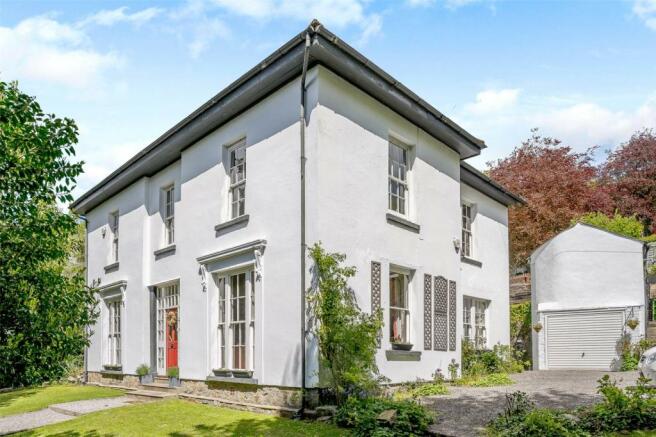 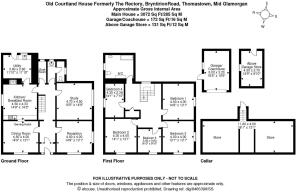 Tenure: Please confirm if this is a freehold or leasehold property with Fine & Country

Fine and Country Cardiff are delighted to present this beautiful former Rectory to the market, set in its own private plot with superb views this is not a property to be missed!

Old Courtland House is a Grade Two Listed character villa set upon the Hill of the Conservation area of Thomastown, its private setting and far-reaching views are truly spectacular and having once been named as ‘One of the most significant houses in Victorian Merthyr the property still boasts many of its original features: including beautiful floor to ceiling Sash windows, handmade shutters, intricately designed cornices and original doorways.

“We have always lived in ‘character’ houses, so when we looked at the property, which at that point had been empty for three years, we had two initial impressions,” say the current owners of Old Courtland House. “Firstly, its sheer size and grandeur, and secondly that it required a great deal of ‘tender loving care’ to restore it to its former glory. Having done our research, we discovered that an article had been written about the history of the house in an academic journal, noting it as ‘one of the most significant houses in Victorian Merthyr’. We can honestly say it has been an honour to be custodians of the house during our time here.”

In that time, the owners have made various improvements to the property. “We have renovated the house from top to bottom,” they say. “After moving in, our initial job was to employ builders to replaster sections of the outside walls and to replace the roof. While this was taking place, we started the process of redecorating all of the rooms, which in many spaces involved re-wallpapering, exposing original stonework, recarpeting and sanding back original floors. Out of all these jobs, the large entrance hall was probably the most difficult, having to carefully remove layer and layer of Victorian wallpaper— but we got there in the end. The most gratifying job was the kitchen, which we totally ‘gutted’, replacing modern fitted units with free standing carpenter-built furniture. In addition to the inside, we have also done significant work on the garden, which ranged from simply ‘tidying up’ the front and side gardens, to totally restructuring the rear one – from an unwieldly vegetable patch to a tiered lawn area with patio and custom-made pergola. Finally, we also recently replaced the rear entrance gates, which are now opened via remote control.”

The historic character of the house is still a favourite feature of the property for the owners. “As it is Grade 2 listed, the house has numerous original features, ranging from massive sash windows, to beautifully designed cornices,” they say. “It also has a lovely Aga cooker, which we had fitted in the kitchen as part of our creative vision for the house ‘coming to life’. Alongside the sociable family living spaces, the office has also come into its own over the last year and half, enabling me to work comfortably from home.”

Outside, the property has much to offer, too. “The house is situated in Thomastown conservation area and sits in a large private plot surrounded by trees,” say the owners. “There are many areas surrounding the house where you can enjoy the sun in privacy and enjoying far reaching views. We are just 5 minutes south of the foothills of the Brecon Beacons National Park, and only 30 minutes north of Cardiff. The area already boasts outdoor activities such as Bike Park Wales, the UKs first full-scale mountain bike park; Zip World Tour, considered to be the world’s fastest seated zipline; and a 575 acre Marvel owned snow centre and holiday resort currently in planning. In terms of local amenities, we have a train station within walking distance, a newly constructed bus station, cinema, leisure centre and extensive shopping facilities, with Trago Mills recently opening one of only four UK stores in 2018. As part of the Cardiff City Region Metro development, Merthyr Tydfil will soon benefit from far faster transport links to the capital, too.”


Having been lovingly restored throughout by its current owners, this elegant, well planned home would suit a growing family, there are three large reception rooms, a cloakroom, boot room, utility room and a charming kitchen/breakfast room complete with bespoke handmade units, and a traditional AGA.

There are 5 good sized double bedrooms to the first floor, with family bathroom, all with large sash windows that allow natural light to flow through creating a bright and airy feel throughout.

Outside, well maintained trees and shrubs which enclose the property, giving it a secluded and tranquil feel, to the rear there is a large, tiered garden with a southerly aspect, making it a perfect spot to sit take in the wonderful, uninterrupted views to the rolling countryside.

Merthyr train station is only a short walk away, and with plans to link with the new Metro Line, commuting
in and out of Cardiff is set to be easier than ever. There are plenty of local amenities close by too from shopping, dining and local schooling and leisure facilities. Bike Park Wales is only a short drive away, as are the foothills of the Brecon Beacons National Park and with exciting plans in place for Marvel to build a 575 acre ski and holiday resort (which would create a great opportunity for someone hoping to convert the garage/coachouse to a holiday let) you wont be short of things to do.

The property is set in a large private plot, with a tiered, landscaped garden to the rear, with hand built padodga ideal for taking in the far stretching views, there are various sun traps surrounding the perimeter of the property that make for idyllic sitting areas to enjoy a summers afternoon.

There is ample parking for 4 or 5 vehicles which can be accessed via a remote controlled electric roller door that is nestled between the trees, accessed via the road to the side of the property.

There is the added benefit of a detached garage/outbuilding that offers potential to be converted to a home studio/annexe or holiday let (subject to relevant planning consents) which could be of particular interest to anyone looking to attract holiday makers that will travel to the area for the Zip wire, Brecon Beacons National Parks, Bike Park and in the near future the proposed ski report.

Location
Old Courtland House is approx. 23 Miles outside of the capital, regular trains services operate from Merthyr Tydfil station to Cardiff central & Cardiff Queen Street. The bus station is located on Castle Street to the north of the town centre.

Brecon Beacons national Park is a short drive away which provides breath taking views, scenic drives, impressive waterfalls and a varied choice of walks suitable for all ages and abilities.

For the adventure seekers, Bike Park Wales, one of the UK's largest full scale Bike tracks is a short ten-minute drive away as well as Zip World, there are also plans in place for a 575 acre ski and holiday resort to be built in the area and there is one of the four UK Trago Mills stores located ten minute drive away.

There is plenty to do within walking distance of the property too, from cinemas, supermarkets, hairdressers, shopping, and dining, along with a choice of well regarded local schooling close by.


Services
The property is serviced via mains gas, electric and drainage.

All measurements are approximate and quoted in metric with imperial equivalents and for general guidance only and whilst every attempt has been made to ensure accuracy, they must not be relied on. The fixtures, fittings and appliances referred to have not been tested and therefore no guarantee can be given and that they are in working order. Internal photographs are reproduced for general information and it must not be inferred that any item shown is included with the property. For a free valuation, contact the numbers listed on the brochure.

At Fine & Country, we offer a refreshing approach to selling exclusive homes, combining individual flair and attention to detail with the expertise of local estate agents to create a strong international network, with powerful marketing capabilities.

Moving home is one of the most important decisions you will make; your home is both a financial and emotional investment. We understand that it's the little things ' without a price tag ' that make a house a home, and this makes us a valuab

Disclaimer - Property reference DTA210004. The information displayed about this property comprises a property advertisement. Rightmove.co.uk makes no warranty as to the accuracy or completeness of the advertisement or any linked or associated information, and Rightmove has no control over the content. This property advertisement does not constitute property particulars. The information is provided and maintained by Fine & Country, Park Lane. Please contact the selling agent or developer directly to obtain any information which may be available under the terms of The Energy Performance of Buildings (Certificates and Inspections) (England and Wales) Regulations 2007 or the Home Report if in relation to a residential property in Scotland.