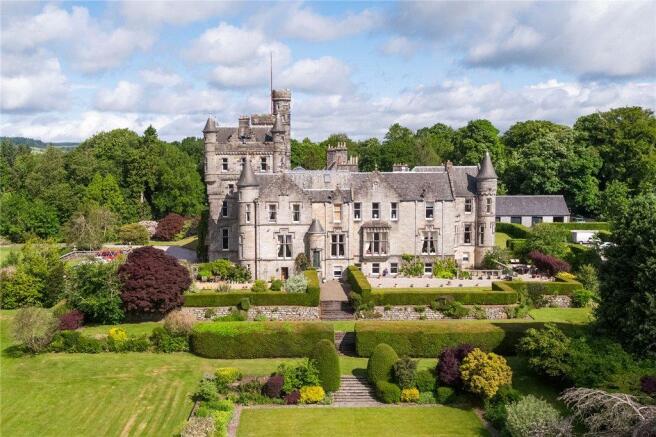 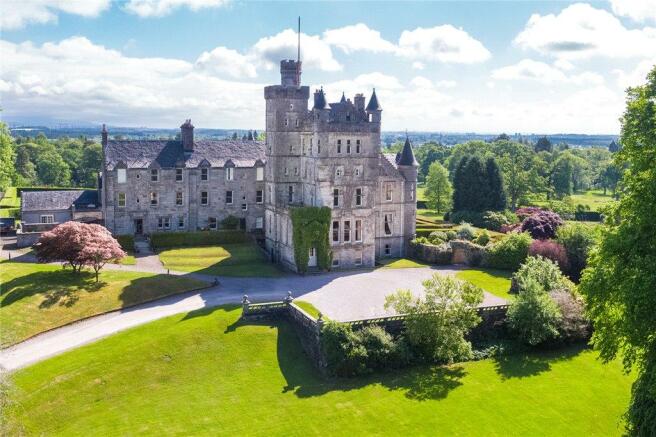 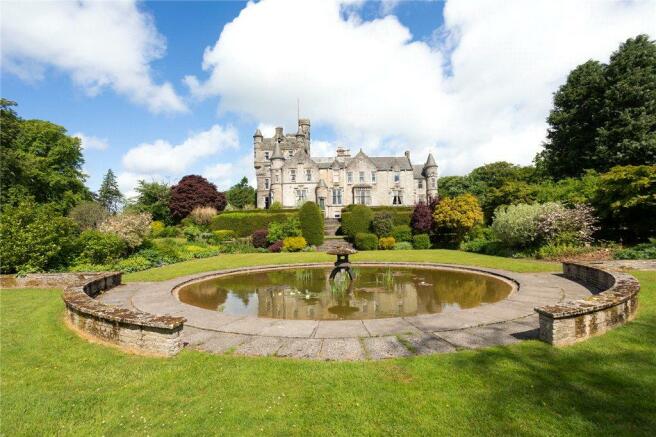 Tenure: Please confirm if this is a freehold property with Robb Residential

Description
Houston House is a Category B listed Victorian mansion house of solid stone construction under slated roofs of variable pitches. The house features towers, turrets and crow stepped gables. Internally has seen the careful and sensitive preservation of many period and original features which include marble and stone fireplaces. Rich French polished original timbers, hardwood flooring, ornate plaster work to ceilings, corbels and cornices and many other period features typical of a grand Scottish baronial mansion.

Stone gate piers are at the entrance to Houston House and a sweeping driveway encircles a grass roundel with ancient and tall mature trees, before leading to a gravel vehicle turning and hard standing apron with impressive stone balustrade.

Six homes have been sensitively created by the conversion of Houston House and Langdales front entrance is accessed through the main front door. It is only one of the two homes that has direct access through the Great Hall.

Langdales has the original ‘L’ shaped drawing room. It has ornate plasterwork to ceiling with cornicing and corbels. Hardwood flooring throughout. There are two large South facing double windows with shutters and two large east facing windows with shutters. The drawing room has the original Carrera White marble fire surround with a polished steel fire insert decorated with the Speirs Crests and Motifs with Latin inscription. There is a large box window seat facing South over the large Victorian Lily Pond. An open ornate arch leads to a another seating area and formal dining room.

Garden Level
The garden level is accessed via a half turn oak stairway and leads to lower hallway and gives access to all lower apartments and back door leading to the sunken patio garden and private gardens.

Great Hall
On entering Houston House at the main front door, one is met with the original pink marble stairs along with a carved metal motif of one of the sailing ships belonging to the Speirs family. This first entrance hallway leads into the Great Hall through double Oak panelled doors. The Great Hall has much character and many preserved features, dado height oak panelling throughout, stone pillars, arches and the original stone fire surround with open fire. There are chandeliers, detailed cornice and plasterwork as well as a dedicated kitchen and wc.

Langdales is one of the two homes within Houston House that is entered via the Great hall, by arrangement, each house enjoys shared use of the Great Hall for entertaining and special occasions.

Private Gardens
Langdales enjoys dedicated private gardens surrounding the property. A door from the rear lower hallways leads to a flagstone sunken patio garden which was orginally the orangery with raised stone planters and bounded by elaborate stone balustrading. Steps and a gate lead to a gravel south facing terrace and apron bounded by pruned copper and an evergreen yew hedge. There are manicured level lawns and steps leading to the residents communal gardens, rear car parking and garages.

Parkland Gardens & Grounds
In addition to Langdales own private garden, there are around 6 acres of communal gardens shared by all the residents of Houston House. There is feature yew box hedging and many borders housing semi ancient and specimen trees. The grounds are mainly laid to mown grass and lawns and in true Victorian style there is a large circular pond surrounded by herbaceous borders.

Note
A planning application has been submitted for the installation of residents only remotely operated gates at the entrance to the grounds of Houston House.

Historical Note
The modern history of Houston starts with the barony of Kilpeter (afterwards Houston) from Baldwin of Biggar, Sheriff of Lanark in the reign of King Malcom the IV to Hugo De Padvinan, who died in 1190, is on record as one of the witnesses to the foundation charter of the Abbey of Paisley in 1160 granted by Walter, High Steward of Scotland.

The village where Hugo settled adopted the name Hews toun now Houston. Hugo and his successors adopted the family name “Houston”. The records in the neighbouring Houston & Killellan Kirk shows that the final occupant of the castle was Sir John Houston who died in 1751. It is said that one of his family was sentenced to be hanged for fatally wounding his adversary in an illegal dual, so the family left the castle and emigrated to America. General Sam Houston (1793 – 1863) was the founding father of the State of Texas whose largest city bears his name, was a great grandson of Sir John Houston, thereby establishing a direct lineage between Houston House, Houston Renfrewshire and Houston Texas.

Following the emigration of the Houstons, the old village was cleared from around the castle. The new village of 35 cottages was built in 1781 using stone from the castle.

Alexander Spiers of Elderslie, owner of Spiers Wharf, amassed enormous wealth between 1745 and his death in 1782. He was a leading tobacco lord worth at that time around £153.000, equivalent to around £133m today. He used this to acquire estates in Renfrewshire, Lanarkshire and Stirlingshire, including Houston Castle and its grounds.

The present building, now known today as Houston House, was built by Lady Anne Speirs between 1872 and 1905, to a design by David Thompson. The design involved building a number of wings to create Houston House in its present form, and incorporated part of the remaining Houston castle into what is now the West Wing of the house. Two portraits of Lady Anne Spiers still hang in the Great hall which also houses the original Collard and Collard piano she bought following the completion of the house.

The final sole owners and occupiers of the House were the Crichton Maitland family. The house was subdivided into its present 6 discrete wings. The conversion was inspired by Kit Martin who was well known for the restoration and conversion of many great houses such as Tyninghame (East Lothian), Cullen House (Banff), Keith Hall (Aberdeenshire) and Formakin (Renfrewshire). Using his concept of vertical sub-division, work on the conversion started in 1994. Each wing retains one or more of the original principal rooms of Houston House. Houston House comprises of Langdales, Garden Wing, West Wing, The Courtyard, The Tower and the East Wing.

Note: The services have not been checked by the selling agents.

Factoring
Houston House is self-factored by the HHCA (Houston House Co-owners Association) the monthly service charges for Langdales are currently set at £429.20.

Situation
Houston House lies at the centre of an Historic estate on the edge of the charming conservation village of Houston. The house is situated on the edge of the old part of Houston village, set within private woodlands and policies in a naturally beautiful area of countryside south of the River Clyde in West Renfrewshire. The house enjoys private and shared gardens in a beautiful mature setting.

Houston is surrounded by attractive rolling countryside and yet is only 7 miles from Glasgow International airport. The village has a bus service to Glasgow and there is a main line rail station at Johnstone (4 miles).

Houston village has reputable primary and secondary schooling. Langdales is within the catchment for Gryffe High School, ranked 6th in The Heralds top 50 state schools. Glasgow has numerous independent schools and St Columba’s in Kilmacolm (5 miles) has an independent day school for girls and boys (between 3 – 18 years )

Local shopping is available at the Phoenix centre and at the Braehead retail village which has Sainsbury and M&S anchor stores.

Glasgow city (14 miles) has all the cultural, higher educational and leisure services normally associated with a major international centre.

Kilmacolm has an 18 hole park/heath land golf course and Bridge of Weir has 2 fine golf courses - Old Ranfurly & Ranfurly Castle which are both popular and challenging 18-hole parkland courses.

The river Gryffe runs through Houston and it is possible, by permit, to fish for brown trout, sea trout and salmon. The river has runs of salmon at the back end.

Castle Semple loch offers inland sailing and the Firth of Clyde has excellent chandlery and marina services as well as some of the UK’s most scenic and enjoyable coastal sailing.

Houston has a squash and tennis club and at Renfrew there is a David Lloyd fitness centre.

Travel Directions
From Glasgow city centre proceed in a westerly direction on the M8 motorway. Travel for 10 miles, bear left at junction 29 following signs Irvine on the A737. After 2.8 miles take the Johnstone exit. Turn right at the traffic lights and proceed on Barrochan Road for 2.2 miles. At the roundabout, turn right onto Houston Road. After 0.5 miles turn left, continue for 0.3 miles then turn right onto Kirk Road. Proceed along Kirk Road and immediately after the Houston Church on the right, turn right into the gates of Houston House. Continue around the driveway to reach the gravel apron in front of the main entrance."
" "
" 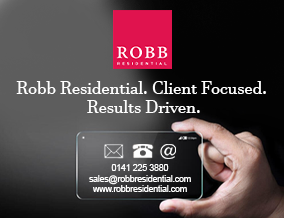 Robb Residential is an independent full service sales and lettings agency business. Our Principal, Iain Robb and his team have been successfully selling and providing residential asset management services in quality property for over 30 years. Iain has consistently recruited and worked with some of the best Estate and Lettings Agents in the country.

Together we conscientiously deliver service excellence and results. Our efforts have been recognised by our professional partners and our c

Disclaimer - Property reference GLG210083. The information displayed about this property comprises a property advertisement. Rightmove.co.uk makes no warranty as to the accuracy or completeness of the advertisement or any linked or associated information, and Rightmove has no control over the content. This property advertisement does not constitute property particulars. The information is provided and maintained by Robb Residential, Glasgow. Please contact the selling agent or developer directly to obtain any information which may be available under the terms of The Energy Performance of Buildings (Certificates and Inspections) (England and Wales) Regulations 2007 or the Home Report if in relation to a residential property in Scotland.