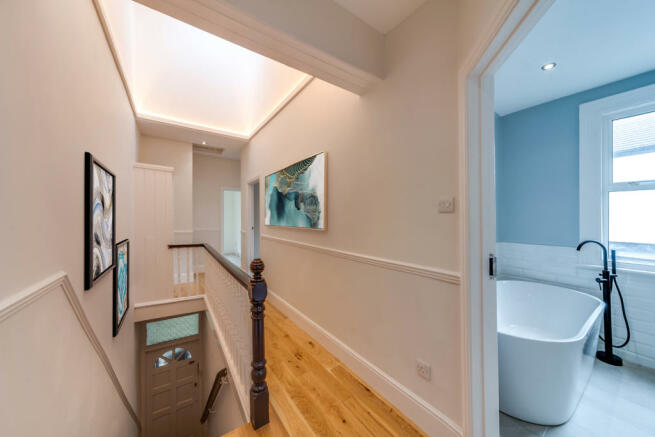 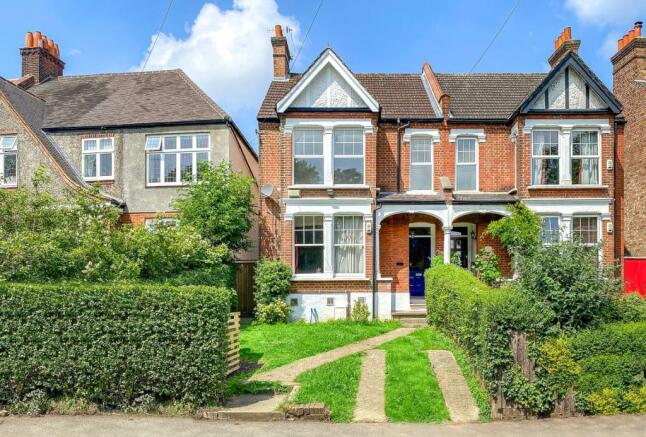 Why should you buy me?

Occupying the whole first floor of a grand Victorian semi-detached house, the flat not only has the benefit of no neighbours above, it also features two huge loft spaces, one of which has had planning granted for a hotel like master bedroom with en-suite if desired.

Unlike most first-floor apartments, the property also gets the benefit of its own large section of West facing garden, but not just with the traditional side access… it has a mystery door in the flat down to the garden (YES MYSTERY DOOR, you read correctly!), perfect for surprising guests or for summer BBQs when you want the kitchen extending out to the garden.

Car owners (or those who want their guest’s cars close) will also be glad that (again not typical with first floor conversions) the flat has shared use of the front garden and sole use of the off-street parking space.

There is just one ground floor neighbour below who own the other 50% share of freehold, so the two flats do not pay ground rent and each have an equal stake of the building, which is a key advantage over leasehold alternatives for numerous reasons. I (the agent) would be happy to explain if required.

Internally the floorspace (including the two loft spaces) is far greater than most alternatives – measuring in at 1730ft2 (160.7m2), and as shown in the floorplan, the rooms are each brilliantly proportioned.

The 4-piece bathroom suite is a godsend for the ageless debate of shower vs bath, and the bath is larger than most to perhaps even accommodate two!

The owner has lived in the property for over 20 years but wanted to move out and refurbish, to ensure the property is a ‘ready to move in’ blank canvas for the new owners and to sell chain free to ensure there are no sticky timescale issues.

Virtually everything in the flat is brand new, including plumbing, electrics, plastered walls, flooring and of course the kitchen & bathroom.

Despite being so close to so much, Underhill Road is a quiet Victorian street in the heart of East Dulwich connecting Lordship Lane with the centre of Barry Road, and is walking distance to Lordship Lane, Peckham Rye & Dulwich Village.

A rare bonus is the free on street parking – which saves scrapping around for visitors permits if required.

For public transport, as pictured, the P13 bus actually stops almost directly outside the flat. The P13 runs from Streatham Station to New Cross Gate Station and would be quickest to West or East Dulwich Station in the mornings/evening commute but also stops close to Peckham Rye Station.

For cyclists, the City is approximately 30 minutes away (according to Google), with much of the journey by dedicated cycle paths, parks and quiet cycle routes.

St Dunstan’s, Alleyn’s, Dulwich College and JAGS are all a short drive. Local state primary schools include Goodrich and Heber while older kids can apply to either of the Harris academies at Peckham Rye or Kingsdale.

Walk down the Rye for Peckham’s creative quarter (Copeland Park, Peckham Levels and the Bussey), late-night bars and superb restaurants (listed below).

Artists’ studios are rife, yoga studios are plentiful and there are regular pop up concerts and exhibitions within 1.5km.

Be quick on this one! We can’t see it sticking around.

The amazing amenities Include:

Agent House is a collective of self-employed agents, with each agent given complete autonomy over the business that they run.

To ensure the service standards our clients receive is never compromised, we have incomparable industry values, only accommodating experienced and qualified agents.

The world is changing, with a clear swing in opinion for quality over quantity, and integrity before profit. Our view is that the estate agency industry in the UK should be no exce

Disclaimer - Property reference S35183. The information displayed about this property comprises a property advertisement. Rightmove.co.uk makes no warranty as to the accuracy or completeness of the advertisement or any linked or associated information, and Rightmove has no control over the content. This property advertisement does not constitute property particulars. The information is provided and maintained by Agent House, London. Please contact the selling agent or developer directly to obtain any information which may be available under the terms of The Energy Performance of Buildings (Certificates and Inspections) (England and Wales) Regulations 2007 or the Home Report if in relation to a residential property in Scotland.