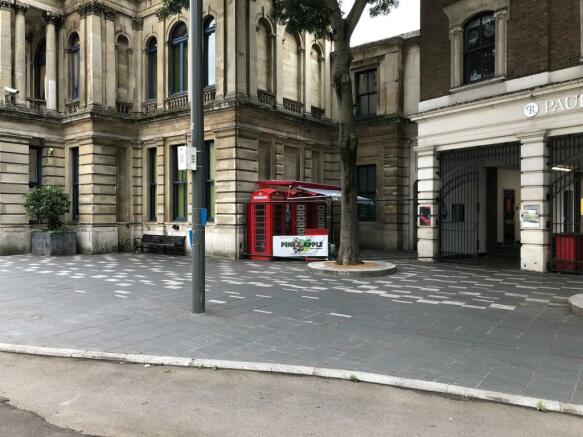 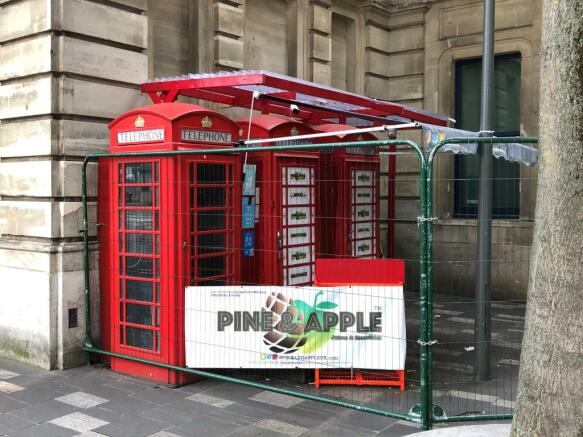 These historic listed "K6" red phone box or “Jubilee” kiosks, commemorating the Silver Jubilee of the coronation of King George V. These boxes are 8'3" high and 3ft square. They were originally designed by Sir Giles Gilbert Scott, who also designed Liverpool’s Anglican Cathedral, Battersea Power Station and Bankside Power Station now Tate Modern. Historic England have listed to preserve these iconic red kiosks, and many have transformed them to coffee shops, libraries, museums, bakeries, and defibrillators. In Cheltenham, 10 red phone boxes have been transformed into miniature art galleries, showcasing the work of local artists.

This kiosk is currently trading (refer to the legal pack) paying £1,080 per annum on a license agreement with A1 retail use and mains electricity . There is no service charge or ground rent to pay.

Kiosk 1 is the centre telephone kiosk.


The London Borough of Newham is a London borough that is 5 miles east of the City of London, north of the River Thames (the Woolwich Ferry providing the only crossing to the south), bounded by the River Lea to its west and the North Circular Road to its east. Newham was one of the six host boroughs for the 2012 Summer Olympics and contains most of the Olympic Park including the London Stadium, and also contains the London City Airport. Major districts include East Ham, Stratford, Plaistow, Forest Gate and Canning Town. The telephone kiosk is located on Broadway immediately outside The Old Town Hall.


Tenure
You own the kiosk and can resell at any point, but it is heritage site, so cannot remove them or alter the exterior. The kiosk is registered as a Listed Building at Historic England (see

Disclaimer - Property reference 62612. The information displayed about this property comprises a property advertisement. Rightmove.co.uk makes no warranty as to the accuracy or completeness of the advertisement or any linked or associated information, and Rightmove has no control over the content. This property advertisement does not constitute property particulars. The information is provided and maintained by BidX1 Commercial, London. Please contact the selling agent or developer directly to obtain any information which may be available under the terms of The Energy Performance of Buildings (Certificates and Inspections) (England and Wales) Regulations 2007 or the Home Report if in relation to a residential property in Scotland.

Auction Fees: The purchase of this property may include associated fees not listed here, as it is to be sold via auction. To find out more about the fees associated with this property please call BidX1 Commercial, London on 020 8012 4254.