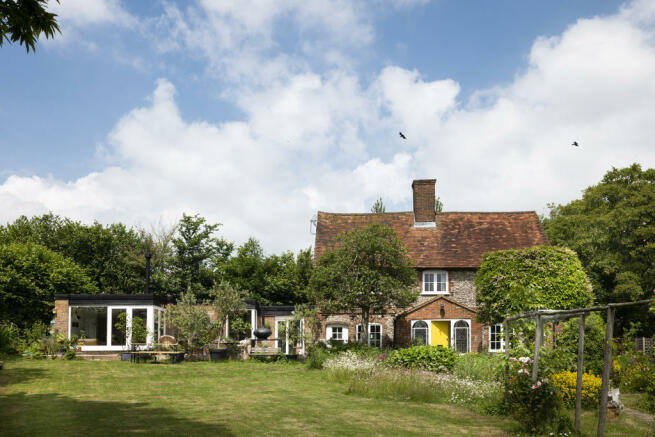 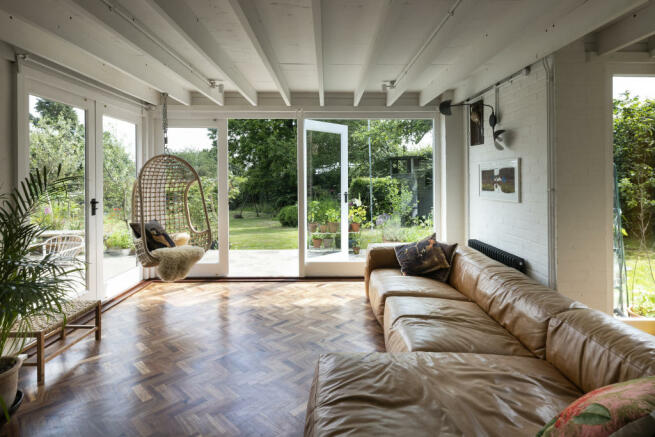 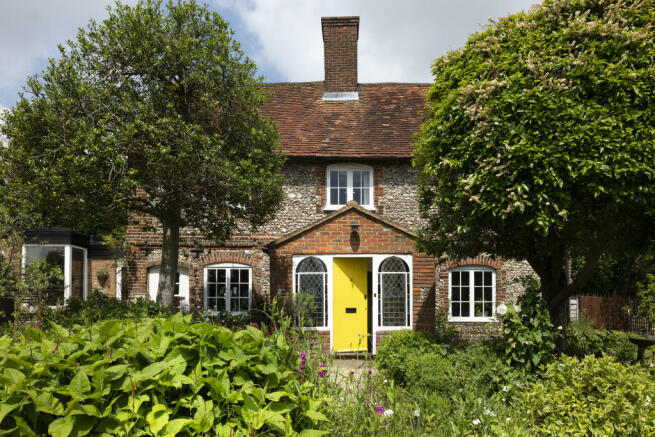 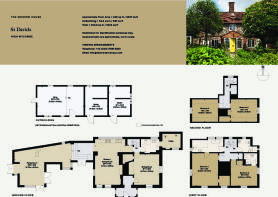 St David’s is a handsome detached Grade II-listed home in the village of Downley, which sits in the Chiltern Hills, just north of High Wycombe. The house dates from 1699 and is constructed in the vernacular style, with a brick and knapped flint façade topped by a tiled roof. A single-storey, flat-roofed extension, added in the 1960s, adjoins and interlinks the main building. The south-facing home contains four bedrooms and has a wide, mature garden, with a stable building to the south of the plot.

St David’s sits in a bucolic setting directly opposite Downley Common, which comprises 22 hectares of woods and grassland at the heart of Downley village. The home unfolds across two adjoining, interlinked parts, and has recently been the subject of a comprehensive renovation. The original section is a three-storey structure, while the 1960s addition is a single-storey, L-shaped plan.

Access to the house is through a timber gate, framed by a natural arch of climbing shrubs. A garden path leads to a front porch with stained glass windows and a yellow timber door. This opens into a ground floor reception room with exposed timber beams, sash windows and timber wall panelling. A pared-back aesthetic reigns, providing the perfect canvas upon which to display the home’s original period features, enlivened by splashes of primary colour. A hall leads from the reception room to a WC and utility room; the kitchen and dining room complete the ground floor plan and provide access to the 1960s extension.

The L-shaped extension is currently used as a family room. Timber beams run across the ceiling, framing the space and connecting it visually to the main house; the brick walls have been painted white and timber parquet flooring runs underfoot. Three sets of French doors flood the space with natural light and open onto a beautiful terrace that overlooks the garden.

In the main house, a stairwell with timber panelling painted a vibrant orange ascends to the first floor. Here, there are two double bedrooms, a bathroom and a shower/WC built into the eaves. The main bedroom has a walk-in closet and dual aspect sash windows that overlook the garden, facing south and west; the second bedroom has an en suite bathroom and also has dual aspect windows, facing south and east. The bathroom has a freestanding bath, black sanitary ware and a tall heated towel rail, with two sets of partially opaque sash windows that illuminate the space. The shower room is decorated with dark green tiles and black paint, with large panel black floor tiles and a black-framed shower door. The stairwell continues to the second floor where two further bedrooms complete the plan.

Situated across the garden and to the south of the plan is a former three-horse stable, with horizontal timber elevations and a corrugated roof. This is currently used as storage but has clear potential for alternate use. There is an vineyard to the rear of the stable which is available to rent by separate agreement.

The mature south-facing garden occupies the full width of the plot. The central lawn has verdant borders and is dotted with mature trees and shrubs; a separate section of the garden has been given over to raised beds, and there is a timber treehouse.

Downley lies in the Chiltern Hills AONB, which covers 324 square miles of countryside stretching from the River Thames in southern Oxfordshire up through Buckinghamshire and Hertfordshire. The Chilterns contain many historic, protected and rare habitats such as box woodland, chalk grassland and chalk streams, which are set amongst attractive open countryside, farmland and woodland.

Brush Hill Nature Reserve lies to the north of the house, while Hughenden Manor, the former home of British Prime Minister Benjamin Disraeli, is a 15-minute drive or 10-minute cycle to the east. The tranquil Downley Common is just opposite the house; popular with the local red kite population, it is a lovely spot for walks or picnics. It links to Naphill Common to the north for those seeking longer walks, one of which enables a visit to Hughenden Manor and back along attractive woodland paths.

Downley is just north of High Wycombe, where the M40 can be accessed; this provides access into London to the east or out to Oxford and onto the Cotswolds to the west. There are direct trains from High Wycombe to London Marylebone, which depart twice hourly with a journey time of around 30 minutes.

Disclaimer - Property reference TMH78712. The information displayed about this property comprises a property advertisement. Rightmove.co.uk makes no warranty as to the accuracy or completeness of the advertisement or any linked or associated information, and Rightmove has no control over the content. This property advertisement does not constitute property particulars. The information is provided and maintained by The Modern House, London. Please contact the selling agent or developer directly to obtain any information which may be available under the terms of The Energy Performance of Buildings (Certificates and Inspections) (England and Wales) Regulations 2007 or the Home Report if in relation to a residential property in Scotland.