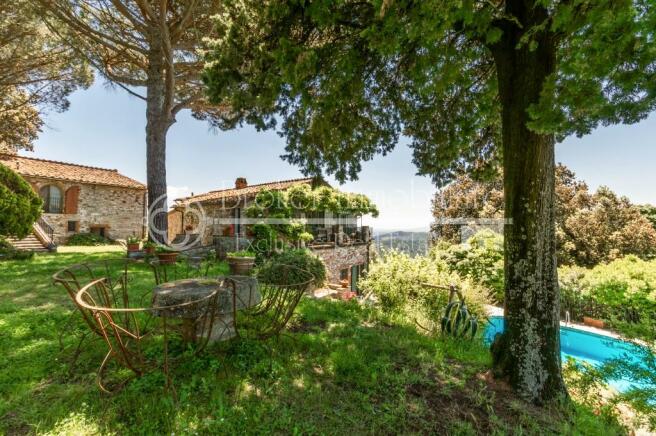 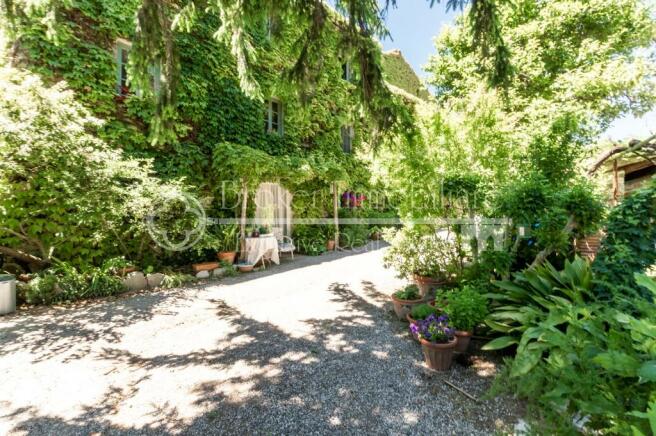 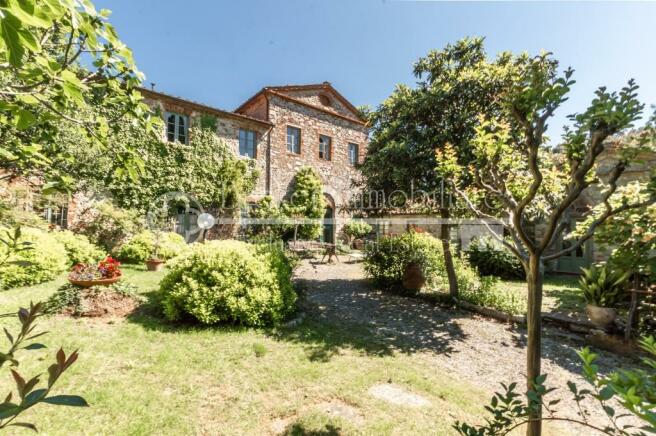 TENUTA BARBIERI - Amazing ample estate for sale in Tuscany, located at the top of a hill, in a magic location overlooking the Versilia seaside, Massaciuccoli lake and the surrounding green hills, from each side of the property.
The estate is surrounded by a private land of 22 hectares with a private water source, olive grove with 800 olive trees, three vineyards of Merlot, Cabernet and San Giovese that need to be replanted and a wooded part.
The real estate compendium, an historical village with master Villa from 1400, is inlaid in the most flat portion of land, at the top of the hill that dominates the seaside, and is composed by eight properties, for a total of 2360 square meters, together with two swimming pools.
All the properties are connected through an internal viability, adjacent to the entrance gate we find a first storeroom of about 50 square meters and a building intended for storage of about 140 square meters in addition to a first big stone building which rises for three levels of the ground for a total of 1120 square meters, an historical villa from the XV century, divided in several units.
The historical villa, in the renewed portion of 265 square meters, is composed by six bedrooms, six bathrooms, kitchen and three living areas. The part which still needs to be renewed of about 855 square meters, is used as big laboratory with an original oil mill and storage rooms, all spaces that can be recovered for residential purposes, in addition to one apartment composed by four rooms, three bathrooms, living and kitchen.
Adjacent to this unit we find the first big swimming pool of this amazing property for sale in Tuscany.
At a short distance to the Master Villa there are three stone buildings also from 1400 with a breath-taking panoramic view on the seaside.
The first Cottage of 210 square meters, named "La Pietra", completely renovated maintaining the original Tuscan style, is composed by a big external patio, a spacious living with kitchen at the ground floor and at the first floor we find two bedrooms and two bathrooms.
The second Cottage is about 170 square meters, named "La Torre", built inside a medieval watchtower, on which we can still see the loopholes from which arrows were shot at enemies, was completely renovated in 2004 and is composed by an external terrace located at the first floor, from where you directly access to a big living area with kitchenette and a bathroom, two bedrooms and two bathrooms at the ground floor.
The third Cottage of about 405 square. Meters, named "La Tenuta", externally is in very well maintenance conditions, with its own panoramic terrace, internally the unit needs to be renewed, that would allow the future owner of this jewel to redistribute the large spaces developed on three levels with five bedrooms, four bathrooms, open and service rooms, according to one's personal needs
There is a second swimming pool adjacent to the three Cottages
To complete the luxury property, for sale in Tuscany, two more buildings for agricultural use, also potentially recoverable for residential purposes, a warehouse of 160 square meters and a warehouse of 105 square meters, in addition to the water storage tank.
While inside this amazing and panoramic Estate, you will forget about the outside world and the everyday life, you will have the chance to take a walk on the 22 hectares of land, swim in one of the two big swimming pools, enjoying the total privacy, but yet very close to all the main service only 5km away.
This prestigious property dominating the Versilia Tuscan seaside, could also be transformed in a luxury resort.

The splendid panoramic estate is located on the hills which divide Lucca from the Versilia coast, but at only 5km from all the main services. The walls of Lucca are 13km far and Viareggio seaside only 16km far.
Massarosa is originally a Roman town and has become an important tourist, agricultural and industrial center, is located west of Viareggio, between the Sarzanese provincial road and Lake Massaciuccoli, and has a territorial conformation distributed between hills, plains and the lake area. The area is dotted with numerous villas, from the sixteenth and nineteenth centuries, historic villages and parish churches. Massarosa is also known for the beauty of its nature, in particular for the famous Lake of Massaciuccoli within Migliarino, San Rossore and Massaciuccoli Natural Park. The garden, develops along the coastal strip between Pisa and Lucca and also includes the former Presidential Estate of San Rossore, the pine forests of Tombolo, Migliarino and Macchia Lucchese. In 2005 the Park was awarded the European Diploma of protected areas and, due to the richness of its fauna, it is also a LIPU oasis. Of the numerous hilly hamlets, the most significant in terms of panoramic views of the marine coast are Corsanico, Bargecchia, Mommio Castello, Montignano, and Pieve a Elici, where you can admire fantastic natural panoramas and historical and artistic beauties, surrounded by greenery and tranquility.

Situated in two of the most renowned coastal towns in Versilia along the Tuscan Riviera, in Forte dei Marmi and Viareggio, the offices of Broker Immobiliare have been recently renovated and furnished with refined style, resulting in an elegant and classy environment, a suitable place where to start your personal real estate research. The office in Forte dei Marmi is located in Viale Morin within the prestigious neighbourhood of Roma Imperiale, while the office in Viareggio is situated just cl

This is a property advertisement provided and maintained by Broker Immobiliare Exclusive Real Estate, Forte Dei Marmi (reference BARBIERI) and does not constitute property particulars. Whilst we require advertisers to act with best practice and provide accurate information, we can only publish advertisements in good faith and have not verified any claims or statements or inspected any of the properties, locations or opportunities promoted. Rightmove does not own or control and is not responsible for the properties, opportunities, website content, products or services provided or promoted by third parties and makes no warranties or representations as to the accuracy, completeness, legality, performance or suitability of any of the foregoing. We therefore accept no liability arising from any reliance made by any reader or person to whom this information is made available to. You must perform your own research and seek independent professional advice before making any decision to purchase or invest in overseas property.