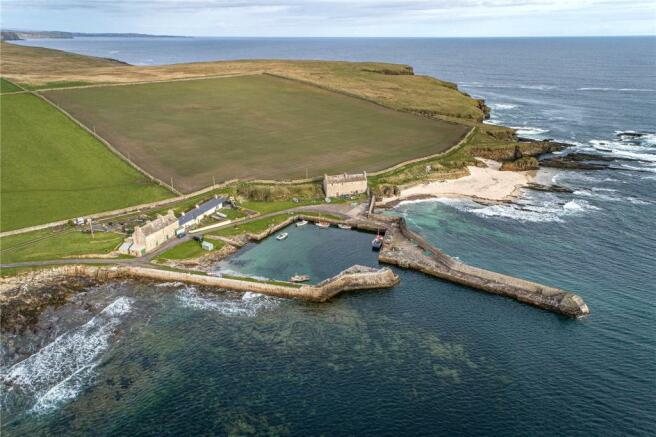 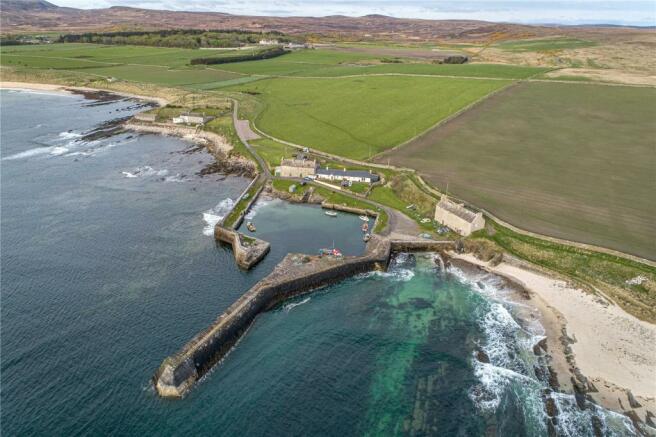 Sandside Harbour is an attractive harbour built in circa 1830 by Major William Innes of Sandside for both trade and fishing. The harbour is located down a private road, accessed via a metal gate and is sheltered to the West by high ground with far reaching views to the North overlooking Orkney and to the East over the Pentland Firth.

The traditional category A listed stone harbour is distinctive and has immaculate stone-built harbour walls with two L-plan piers forming a simple basin as well as a slipway from which boats may be launched. The harbour is used – on a grace and favour basis - by local small leisure boats and a few boats that are used for lobster and crab fishing.

The Net Store is also category A listed and is of traditional stone construction, set beneath a slate and metal sheet roof. The Net Store is built into the bank with west elevation and a symmetrical east façade with two ground floor doors each flanked by windows. The Bothy Flat forms the upper floor of the Net Store building located on the harbour edge and can be accessed from the west at first floor level.

The building is currently unoccupied and will require extensive upgrading. The ground floor of the Net Store building has a double height ceiling from the days when it was used for hanging out fishing nets, and access directly on to the harbourside. Subject to the appropriate planning and listed building consents this could be converted to provide further accommodation or incorporated into the Bothy Flat above to provide a spectacular single dwelling.

NOTE: part of the roof is in dangerous condition and access should not be taken internally to the Net Store.

Immediately adjacent to the residential dwellings and harbour are spectacular white sand beaches surrounded by dramatic cliffs and inlets with breeding wildlife and birdlife.

Sandside Beach is close by, an idyllic sandy beach bounding the Reay Golf Course and is thought to be one of the least visited beaches in Scotland.

Sandside Harbour is situated on the north coast of Scotland between John O' Groats and Tongue, about two miles to the west of Thurso, close to the village of Reay which has grown around Sandside Bay and is situated within the historic county of Caithness. The Bay is an exposed beach break which offers good surfing conditions all year round. Ideal winds are from the south and the waves at the beach break both left and right. This is a quiet beach with few surfers.

The village of Reay provides primary schooling, a village store, and a garage. The well-known Reay Golf Club was founded in 1893 by Mr Thomas Pilkington who took over Sandside and some of the surrounding estates. While shooting formed the major pastime, the links lying between Sandside Bay and the road west from Thurso provided an ideal location for a golf course. Reay Golf Club is one of only seven clubs in the North of Scotland designed in full or in part by the renowned golf course architect James Baird, regarded as one of the finest ever in his field. Reay is Britain’s most northerly 18-hole links course.

Thurso is situated approx. 10 miles to the east and is the most northerly town in mainland Scotland. Thurso functioned as an important Norse port, and later traded with ports throughout northern Europe until the 19th century. A thriving fishing centre, Thurso also had a reputation for its linen-cloth and tanning activities. The town provides a wide range of facilities and professional services, including supermarkets, a hospital, the University of the Highlands and Islands, and primary and secondary education.

The Northerly tip of the Scottish mainland is known for providing the most consistent and best quality waves, and the town of Thurso is a world-class surf spot. Thurso East is a fast reef break and has hosted many international competitions and is something of a Holy Grail for UK windsurfers.

The Northern waters of Caithness and North Sutherland are probably the last unspoilt yacht sailing destination around the UK coastline. Wick Marina is strategically placed for coastal or international passages and provides all the usual town and harbour facilities and services. Thurso Bay offers a large deep water sheltered sailing area with few restrictions.

Wick is situated approx. 25 miles to the east of Reay. This former Viking settlement is the principal town in the far north of the mainland. The town sits astride the River Wick, stretching along both sides of Wick Bay, and holds the claim to fame of once being the busiest herring port in Europe in the mid-19th century. Wick provides a wide range of facilities such as schooling, a variety of shops and restaurants, supermarkets, a post office and a hospital.

Caithness is a county renowned for its fertile farmland, flagstone dykes and rugged coastline. It is surrounded by the wild hills of Sutherland to the south and west. The area is recognised for its sporting and leisure facilities, which include salmon fishing on numerous rivers such as the Thurso, Helmsdale, Halladale, Forss, Borgie and Naver, trout fishing on the many lochs in the area, and stalking and grouse shooting on local estates. In addition to Reay Golf Course, there are several golf courses locally at Thurso, Wick and Lybster, and further down the coast at Helmsdale, Brora, Golspie and Royal Dornoch.

The archaeological remains around Caithness appeal to many. Such is the unique appeal of Caithness that the late Queen Mother owned the Castle of Mey as a holiday home for half a century. The area offers some of the best birdwatching in the UK.

While Caithness is relatively geographically isolated, it is thus unspoilt, yet can be reached with relative ease. Wick has an airport suitable for private jets, plus flights to both Edinburgh and Aberdeen, with onward connections to a variety of UK destinations.

The A9 provides excellent access by road from the south and the railway stations in Wick and Thurso offer a daily service to Inverness, from where Aberdeen, Edinburgh and the south are directly accessible. The A897 provides a shorter and more picturesque route through the Helmsdale and Halladale Straths, via Forsinard and Melvich, approaching Sandside from the west.

From Thurso, continue west on the A836 to Reay, approximately 11 miles. After passing Reay Golf Club on the right, continue through the village and turn right where it is signposted Sandside Bay. Continue along this road for approximately 0.5 miles and Sandside Harbour is located straight ahead (through the metal gate).

Please note the road to the harbour is a private road, although pedestrian access will be generally permitted. There are no rights for the general public to take vehicles (including those towing boats) to the harbour. However a number of locals have used the harbour consistently on a grace and favour basis for a number of years.

Disclaimer - Property reference ABR210016. The information displayed about this property comprises a property advertisement. Rightmove.co.uk makes no warranty as to the accuracy or completeness of the advertisement or any linked or associated information, and Rightmove has no control over the content. This property advertisement does not constitute property particulars. The information is provided and maintained by Savills, Aberdeen. Please contact the selling agent or developer directly to obtain any information which may be available under the terms of The Energy Performance of Buildings (Certificates and Inspections) (England and Wales) Regulations 2007 or the Home Report if in relation to a residential property in Scotland.