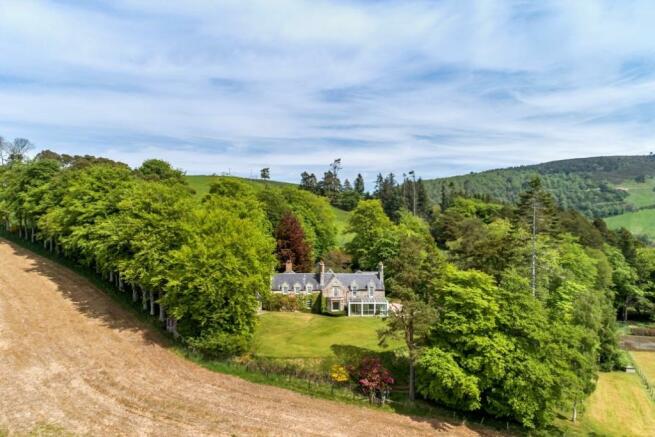 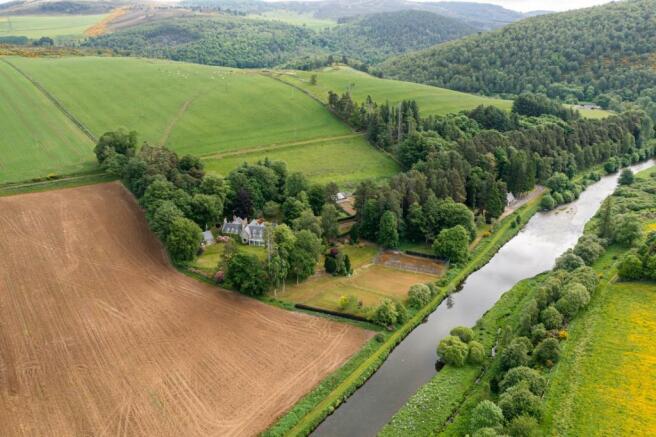 Ardhuncart Estate is a first class mixed-use rural estate incorporating a wide range of assets and attractions. Comprising residential, agricultural, sporting and forestry elements, together with potential for the residential and/or commercial development of several redundant vernacular buildings, the estate is offered for sale for the first time since the 1950s.

Situated in the middle course of the valley of the River Don with outstanding views towards the foothills of the Grampian mountains, Ardhuncart Estate enjoys a peaceful and bucolic setting in one of the less well-known parts of the Scottish Highland fringe.

Following an exaggeratedly meandering course through interlocking and rounded hills clad with a combination of heather moorland, woodland and pastoral farmland, the middle and upper valley of the River Don – ‘Strathdon’ as it’s known – is one of the most attractive parts of the British countryside. Perhaps due to the proximity of its neighbour, the more celebrated ‘Royal Deeside’, Donside is much less frequented by visitors to the northeast of Scotland and the particular stretch of the river straddled by Ardhuncart Estate can be regarded as one of rural Scotland’s hidden gems.

Situated just off the A944 public road connecting the towns of Alford and Huntly in an area sparsely populated and within the top 30 most remote zones of mainland Scotland – Ardhuncart Estate is secluded yet accessible, being 34 and 31 miles distant respectively from Aberdeen – the Granite City and oil capital of Europe – and its international airport.

The closest settlement of note is the small town of Alford, home of Aberdeen Angus cattle, which provides a range of basic services, amenities and facilities including post office, bank, petrol station and convenience stores, primary and secondary schooling and GP medical practice.

The nearest railway station is in Huntly (16 miles) which runs services both north to Inverness and south to Aberdeen and beyond. The closest airport with both domestic and international flights is at Aberdeen (31 miles) which can be reached in under an hour by car under normal traffic conditions.

Comprehensive services are available in the city of Aberdeen which provides a range of administrative, retail, recreational, educational and cultural facilities. Private education in Aberdeen includes Albyn School, Robert Gordon’s College and St Margaret’s School for Girls. In addition, the well-known Gordonstoun School near Elgin is 40 miles to the north.

Though less well known than the neighbouring River Dee, the River Don is one of Britain’s best regarded wild brown trout fisheries alongside a well-established reputation as a productive salmon and sea trout river. In addition to the double and single bank fishing which lies within Ardhuncart Estate, there is extensive additional fishing to be enjoyed either by renting fishing on a day permit basis or by joining the local Angling Association.

The River Dee is one of Scotland’s big four salmon rivers with picturesque and productive fishing for salmon and sea trout. It is available to rent on either a weekly and/or daily basis on the majority of beats throughout the river’s course.

There are a number of renowned golf courses on the North Sea coast at Royal Aberdeen, Cruden Bay and the Trump International Golf Links. More locally, there are enjoyable 18-hole parkland courses at Alford, Huntly and Dufftown.

The Cairngorm Mountains lie to the west and provide climbing, walking and cycling opportunities amongst some of the most spectacular terrain in the British Isles.

For many, the Grampian foothills of Aberdeenshire and Moray are synonymous with Whisky – and Malt Whisky in particular. The area surrounding Ardhuncart is home to historic and famous distilleries, coopers, bottlers and retailers contributing to an industry which is said to be worth about £5.5 billion to the Scottish economy according to a recent report by the Scotch Whisky Association. The Malt Whisky Trail is a collaboration of distilleries offering enthusiasts the opportunity to visit nine local distilleries in order to meet those who play key roles in this multinational industry. It is popular with tourists and adds significantly to the variety of activities available within striking range of the estate.

Disclaimer - Property reference SFA210056. The information displayed about this property comprises a property advertisement. Rightmove.co.uk makes no warranty as to the accuracy or completeness of the advertisement or any linked or associated information, and Rightmove has no control over the content. This property advertisement does not constitute property particulars. The information is provided and maintained by Strutt & Parker, Scottish Estates & Farm Agency. Please contact the selling agent or developer directly to obtain any information which may be available under the terms of The Energy Performance of Buildings (Certificates and Inspections) (England and Wales) Regulations 2007 or the Home Report if in relation to a residential property in Scotland.