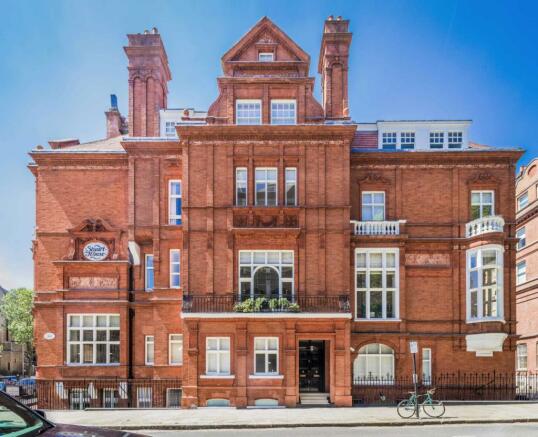 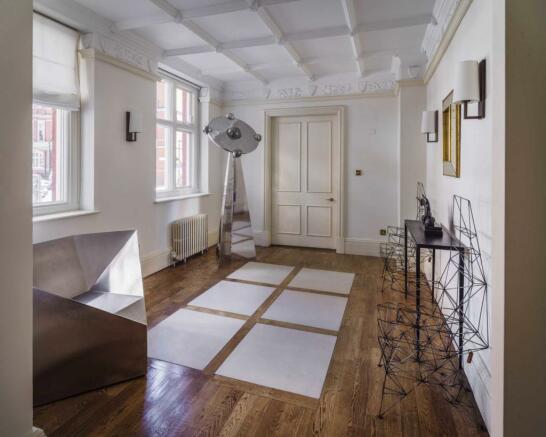 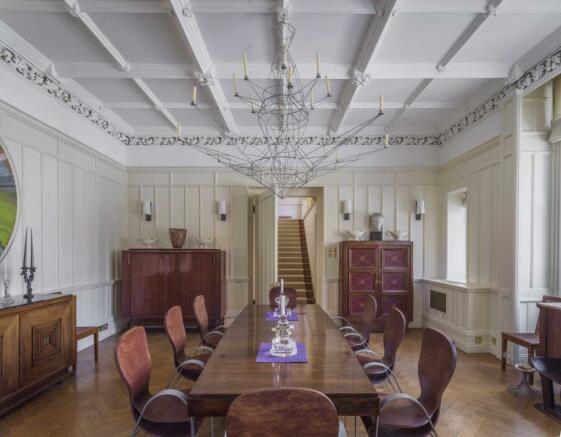 Measuring approximately 11,855 sq ft and spread over six floors, Stuart House is the largest single property publicly and currently on sale in the Royal Borough of Kensington and Chelsea. It sits on Cadogan Square – one of London`s most prestigious addresses and dates back to the early 1880s with historic links to the Stuart monarchy. Many of the Victorian mansions in Knightsbridge have been converted into lateral apartments over the last two decades and overtly modernised. However, this characterful and charming family home remains structurally intact with voluminous rooms and soaring ceilings. It is a wonderful example of 19th century architecture with classical influences. Original period features such as ornate stone and plaster moulding, cavernous fireplaces and grand staircases have been retained.

Stuart House was designed in 1880 by the architects F.G Knight and Hunt Steward for Oscar Leslie Stephen, a director of the Northern Railway, and built by 1884 on the Cadogan family estate. The property has ancestral ties to Princess Diana, the Duke of Cambridge and the Duke of Sussex. On an external wall is a carved scene of what appears to be the arrival of a state figure being greeted by a subordinate. Next to it are the sentences ‘James I arrives Scotland` (referring to King James I of Scotland or King James IV of England of the Stuarts) and ‘Mary arrives in Scotland` (supposedly referring to his mother Mary Queen of Scots). This stone art was carved by the French sculptor Joseph Kramer in 1875. Royal family trees reveal that Princess Diana was related to Mary Queen of Scots whose descendent Charles II of Richmond and Lennox married Lady Sarah Cadogan of the Cadogan family in 1719.

Cadogan Square is one of the world`s finest residential enclaves. The red brick buildings – the majority of which are now apartments – surround the private square garden. There are only a few full houses (including Stuart House) and it was the home of the early high-end mansion block. The estate was named after the Earl of Cadogan and built between 1877 and 1888. Over the last 100 years many famous thespians, writers and socialites have settled there. Sir Christopher Lee was a long-time resident of Cadogan Square. The actor starred as Dracula in a series of Hammer Horror classics and played Saruman in Peter Jackson`s Lord of the Rings trilogy. Boris Karloff who performed Frankenstein`s Monster in Frankenstein in 1931 and voiced Dr Seuss`s The Grinch Who Stole Christmas in 1966 was also a local. Irish fantasy writer Lord Dunsany (The King of Elfland`s Daughter) lived there too. Socialite and model Barbara Daly Baekeland, who had married into the Bakelite Plastic dynasty, lived on Cadogan Square with her son Antony until he killed her with a kitchen knife! She was famed for her beauty, a muse for painters and photographed for Vogue and Harper`s Bazaar. With three private preparatory schools on the square (Hill House, Sussex House School and Knightsbridge School), Cadogan Square sits between Lennox Gardens to the east, Sloane Street to the west and Pont Street to the south. A short stroll north takes you to the cultural and retail heart of Knightsbridge with Harvey Nichols and Harrods, and on to Hyde Park. Cadogan Hall – home to the Royal Philharmonic Orchestra – and the Royal Theatre are both on the doorstep, as is Sloane Square and the King`s Road. There are multiple electric car charging points conveniently located on the surrounding streets.

Notice
Please note we have not tested any apparatus, fixtures, fittings, or services. Interested parties must undertake their own investigation into the working order of these items. All measurements are approximate and photographs provided for guidance only.

Rokstone is London’s most complete Estate Agency offering an integrated sales and acquisition service. Whether you need to sell your property or help to buy your ideal home, Rokstone offers a personalised service. With over 12 years’ experience exclusively in the Central London market Rokstone understands its clients’ needs and expectations.

Disclaimer - Property reference 2925_ROKS. The information displayed about this property comprises a property advertisement. Rightmove.co.uk makes no warranty as to the accuracy or completeness of the advertisement or any linked or associated information, and Rightmove has no control over the content. This property advertisement does not constitute property particulars. The information is provided and maintained by Rokstone, London. Please contact the selling agent or developer directly to obtain any information which may be available under the terms of The Energy Performance of Buildings (Certificates and Inspections) (England and Wales) Regulations 2007 or the Home Report if in relation to a residential property in Scotland.