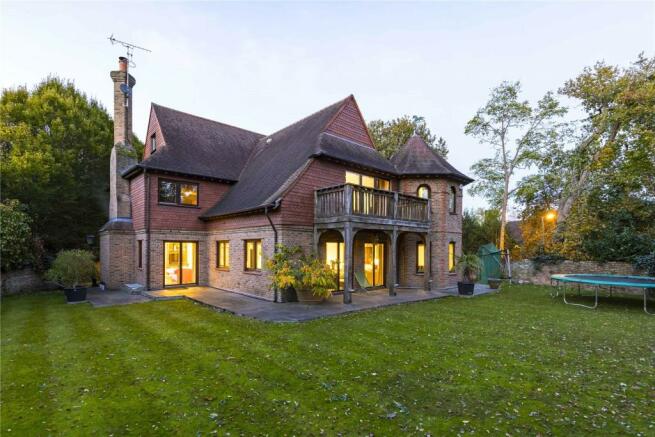 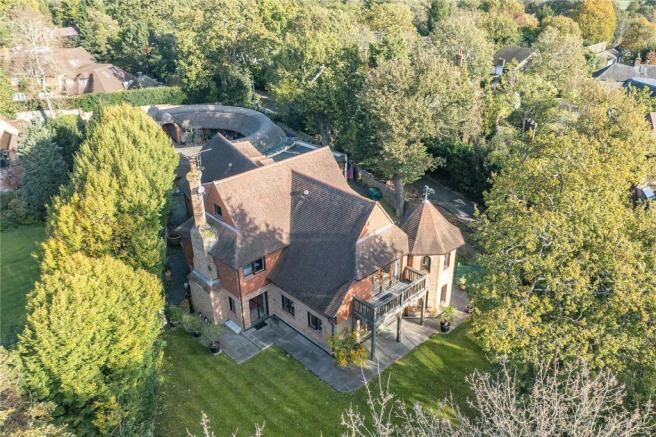 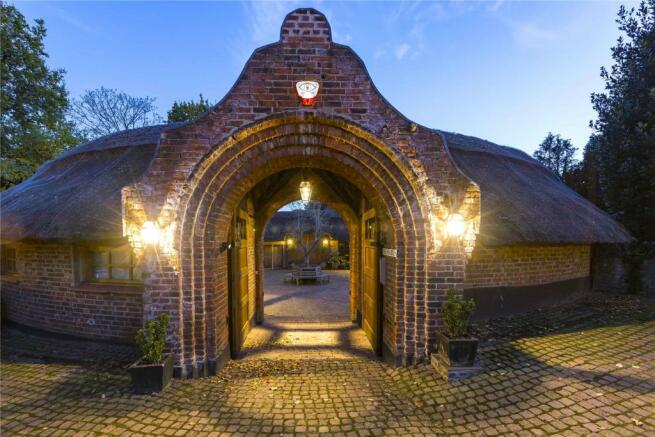 The Stables is a unique set of two properties linked together; the main residence comprises of a newly built five bedroom suite family home offering accommodation close to 8,000 ft2 (735 m2) arranged over four floors and has proven to be excellent for grand scale entertaining due to the wide open spaces on the ground floor; the thatched stables are converted into three self-contained one and two bedroom flats (1,480 ft2/138 m2) and a triple garage (480 ft2/44.5 m2) around the circular cobbled courtyard.

The main residence also comprises a formal drawing room, family room, dining/reception hall, study, cinema room with bar, gym, kitchen/breakfast/TV room, two utility rooms, basement shower room with steam room and a large studio to the second floor. The Stables beams with charm and character throughout the property and can only be appreciated on an internal inspection.

Beverley Lane is a quiet countrified lane within one of the exclusive residential estates of Coombe. The Stables originally part of Edmundsbury is an oasis and can only be fully appreciated on first inspection.

The immediate area of Beverley Lane offers a wide range of recreational facilities including boating on the River Thames, polo at Ham, Golf at Coombe Hill, Coombe Wood and The Royal Wimbledon golf courses within the Common. The Roehampton and David Lloyd tennis and sports clubs are nearby as is the All England Lawn tennis club. There is racing at Sandown, Kempton, Ascot and Windsor. Ladderstile Gate and Kingston Gate which are within easy reach give easy access to the Royal Richmond Park, an area of outstanding beauty, providing a picturesque setting in which to picnic, go horse riding, jogging or just take a leisurely walk.

Theatres at Richmond and Wimbledon are also popular alternatives to the West End together with an excellent choice of restaurants.

There are also numerous schools for all ages, Private, State and a variety of International Schools. Beverley lane is also easily accessible to several British Rail stations giving fast access to Waterloo and other mainline stations. The 57 bus route which runs along Coombe Lane West with the nearest Bus stop towards the end of Beverley Lane runs along between Wimbledon and Kingston town Centres. The A3 trunk road offers access to the South and the West End. Heathrow and Gatwick airports are also within easy access from Coombe.

The Stables was erected circa 1936 ancillary to Edmundsbury which dates back to circa 1927-29 built by an Esher builder called Millen for Mr and Mrs Hird, a fine example of Blunden Shadbolt’s designs. Born on 31 May 1879 the son of a mahogany merchant and an Irish mother from the family name of Blunden, he started his early career as an architect in South Croydon, Rusper, Horsham, Reigate, Bognor, Margate and Brighton. Later in life he had an office near Horley station which he shared with estate agents Hallet and Ballard between the years of 1905 and 1909.

Blunden was also influenced by Lutyens architecture but developed his own niche and his typical trademarks were inglenook fireplaces, doors made from wooden planks and wooden latches and leather draw strings. The Tudor bricks and ancient beams to build Edmundsbury and the Stables were transported from Bury St Edmunds. Shadbolt not only designed new houses but restored many during his career, a list far too long to mention. His career sadly ended when he was knocked of his bicycle, had a fractured thigh and developed diabetes, then he died on 13 July 1949 from pneumonia. Edmundsbury and The Stables are now Grade II listed, and can be preserved as one of his finest works in Surrey still remaining.

Coombe Residential provide a highly professional, courteous and informed service to both seller and purchasers alike. Often found giving excellent advice on future projects and developments, we believe that relationship building is paramount through honest communication, excellent knowledge of the Coombe area and well founded expertise.

The Sales and Lettings departments provide high quality, exclusive, secluded and executive properties to a wide range of clients. The Sales department h

Disclaimer - Property reference WIM130083. The information displayed about this property comprises a property advertisement. Rightmove.co.uk makes no warranty as to the accuracy or completeness of the advertisement or any linked or associated information, and Rightmove has no control over the content. This property advertisement does not constitute property particulars. The information is provided and maintained by Coombe Residential, Wimbledon. Please contact the selling agent or developer directly to obtain any information which may be available under the terms of The Energy Performance of Buildings (Certificates and Inspections) (England and Wales) Regulations 2007 or the Home Report if in relation to a residential property in Scotland.