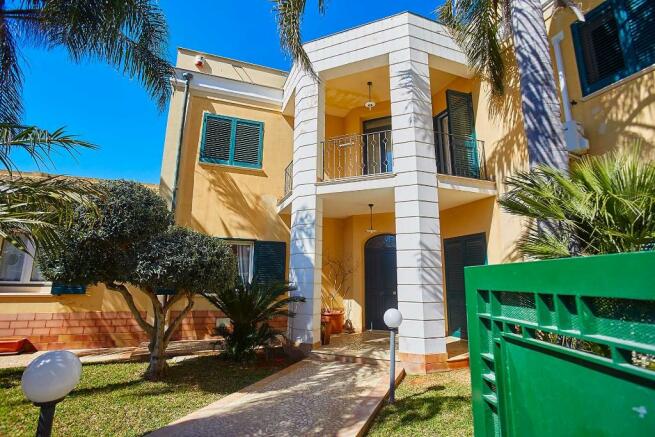 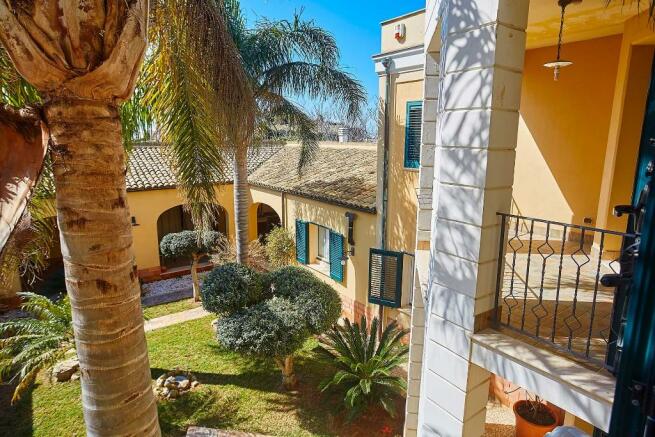 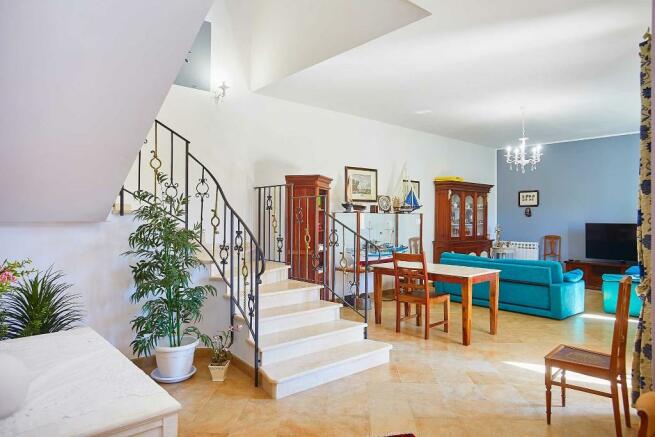 Beautiful villa on two levels, finely finished in the interiors and in the outdoor patio equipped with barbecue and kitchen. The green area is on the large and bright ground floor with double entrance: it is possible to enter both from the living room and from the kitchen, the latter equipped with pantry, laundry and adjoining outdoor area. On this floor, there is a bedroom with en suite bathroom and private veranda.
From the living area a staircase leads to the sleeping area consisting of three bedrooms, two of which are master bedrooms, one with walk-in closet and another with private terrace. Also on this level there is a bathroom equipped with both a Jacuzzi, and a spacious shower, as well as double sink. A veranda is also available to the entire second floor, which allows you to fully enjoy the many sunny days of the climate of Trapani.
The access from the electric gate allows use of part of the patio to park up to two cars. The property is equipped with both solar thermal and photovoltaic panels on the terrace from where you can see the sea.
Excellent investment as a first home or tourist. It is located a few minutes walk from the beautiful white beach of Tonnarella, and not far from the main streets of the center of Mazara del Vallo, as well as the rest of the province of Trapani and Agrigento.

Mazara del Vallo , town in the province of Trapani, crossed by the rivers Mazaro and Arena, for its strategic position was fought since ancient times among Greeks, Elymians, Phoenicians, Carthaginians and Romans.
It was dominated by the Arabs since 827 and conquered by the Normans from 1072. It presents the typical features of both dominations. From the neighborhoods to the Islamic urban plan typical of the medinas, called Casbah, characterized by narrow streets, alleys and courtyards It was then surrounded by the Normans by a well-equipped castle and the cinsero of walls. The Count Ruggero d'Altavilla made it his favorite stay and in 1093 he founded the vast bishopric, he built the cathedral dedicated to the SS. Salvatore and in 1097 he met the first Sicilian Parliament in Mazara.
The city overlooks the Channel of Sicily, the climate is characterized by continuous orographic ventilation with a wind that rises punctually at 11.00 to decline at about 19.00 this means that Mazara del Vallo is an ideal site for all sailing sports ; in fact, the locality is a destination for kite and windsurf enthusiasts from all over the world.
Absolutely do not miss the visit to the museum of the Dancing Satyr, a bronze statue attributed to the Greek sculptor Prassitele, which came to light on March 4, 1998 when Captain Ciccio found it entangled between the nets during a fishing trip.

"Without Sicily, Italy leaves no image in the soul: it is the key to everything" (Italienische Reise, Viaggio in Italia, Palermo, 1817) Johann Wolfgang von Goethe

Engel & Völkers Palermo Palermo Mondello accompanies you for the sale or purchase of real estate in the best locations in Palermo and in the most attractive places in the province.

At the same time, the global network of Engel & Völkers offers a high potential for success

This is a property advertisement provided and maintained by Engel & Volkers Palermo/Sicily, Engel & Volkers Palermo/Sicily (reference CharmingVillaByTheSea) and does not constitute property particulars. Whilst we require advertisers to act with best practice and provide accurate information, we can only publish advertisements in good faith and have not verified any claims or statements or inspected any of the properties, locations or opportunities promoted. Rightmove does not own or control and is not responsible for the properties, opportunities, website content, products or services provided or promoted by third parties and makes no warranties or representations as to the accuracy, completeness, legality, performance or suitability of any of the foregoing. We therefore accept no liability arising from any reliance made by any reader or person to whom this information is made available to. You must perform your own research and seek independent professional advice before making any decision to purchase or invest in overseas property.