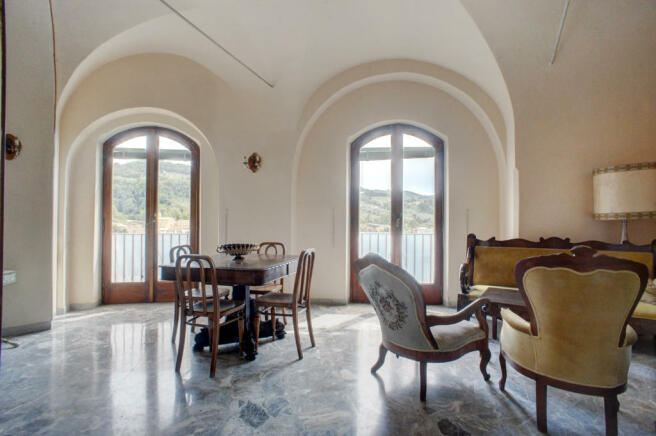 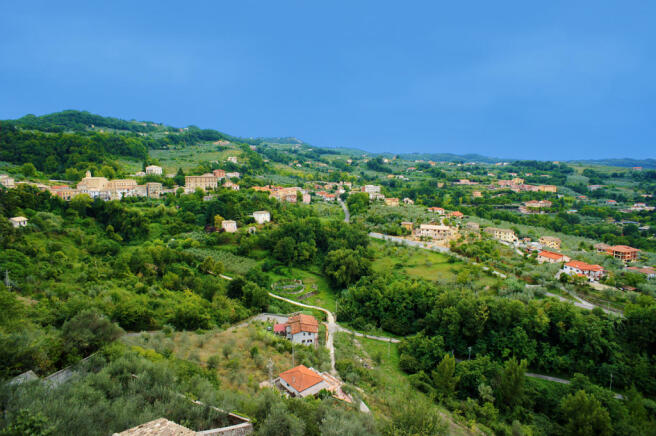 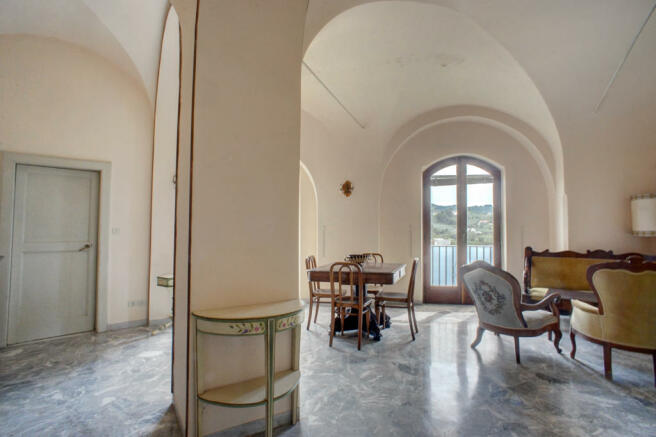 Occupied since pre-Roman times, much of Civita Falconara dates back to the medieval period. Only at the base of the walls can traces of the original Volscian settlement be found. And of course the decoration of the grandest buildings owes much to the great wealth of Arpino during the 1800s. But the winding alleyways, and the stone buildings climbing one above the other up the hillside are mostly medieval in character. Dating back to the 1800s, the 240 sq.mt. spacious Appartamento Melodia is on the edge of this quarter, with splendid views straight out across the valley.

From the entrance hall, you enter a most unusual and striking room: a salon with vaulted ceilings, columns and floor-length picture windows with wrought-iron railings overlooking the valley. A room off, also with vaulted ceiling and valley views, is currently a bathroom, but could be opened back into the living area to create a splendid wet bar for entertaining or a private nook for the TV. There is also a small powder room.

Also opening from the entrance hall is the kitchen, and a further two rooms looking along the edge of Civita Falconara. These two rooms were originally effectively one very large room, bisected by a large archway. This archway is still there - it has merely been boarded up to make a cupboard. Re-opened, this would be an incredible dining room, which could, if you wished, open through to the kitchen.

The apartment consists of two wings at right angles to each other, pivoting on the salon with its picture windows. One wing has the entrance hall and impressive dining room; the other, the private family rooms. This latter part currently is configured with one extremely large bedroom, a second large bedroom, and another room with a fireplace, all in a row, with windows overlooking the valley. A corridor (itself as wide as a small room) runs their length at the back. The second bedroom and the fireplace room were originally one room, similar in size to the extremely large bedroom, and now separated from one another only by a false wall. These rooms could easily become two extremely fine bedrooms with en-suite bathrooms, together with either one smaller bedroom plus bathroom, or a study / small family room etc.

With its unusual layout and splendid views, Appartamento Melodia has the potential to be a really remarkable property.


ARPINO AND THE CIOCIARIA

Arpino, the birthplace of the Roman orator Cicero, is one of the major medieval hilltop towns in the area of Italy called the Ciociaria, the name given to the fertile land that lies south of Rome but north of Naples, situated inland in the hills in the heart of Italy.

Often overlooked, both by tourists and by those foreigners in search of an Italian home, in favour of the more publicized regions of Tuscany and Umbria, the Ciociaria remains largely an unspoilt gem with beautiful scenery and medieval hilltop towns. A home or second home in the Ciociaria, in the hilltop towns of Arpino, Veroli, Alatri or in the rolling countryside that surrounds them, will afford you a setting where over two thousand years of history combine with an idyllic rural Italian lifestyle, where you can still discover the 'real' Italy and take time out from the busy crowds of the larger tourist cities, while being less than ninety minutes journey from central Rome or either of Rome's two airports.

Via Romana Srls is an Italian-incorporated company owned by a British/Australian Chartered Accountant and her photographer daughter, and offers a package of services to facilitate all aspects of the purchase and restoration of Italian property by overseas clients. The Via Romana team works in collaboration with various fully-licensed Italian real estate agencies including the Cinelli Immobiliare Agency, Case & Casali Real Estate Agency and the MSL Elite Group in Rome.

This is a property advertisement provided and maintained by Via Romana Srls, Italy (reference AptMelodia) and does not constitute property particulars. Whilst we require advertisers to act with best practice and provide accurate information, we can only publish advertisements in good faith and have not verified any claims or statements or inspected any of the properties, locations or opportunities promoted. Rightmove does not own or control and is not responsible for the properties, opportunities, website content, products or services provided or promoted by third parties and makes no warranties or representations as to the accuracy, completeness, legality, performance or suitability of any of the foregoing. We therefore accept no liability arising from any reliance made by any reader or person to whom this information is made available to. You must perform your own research and seek independent professional advice before making any decision to purchase or invest in overseas property.