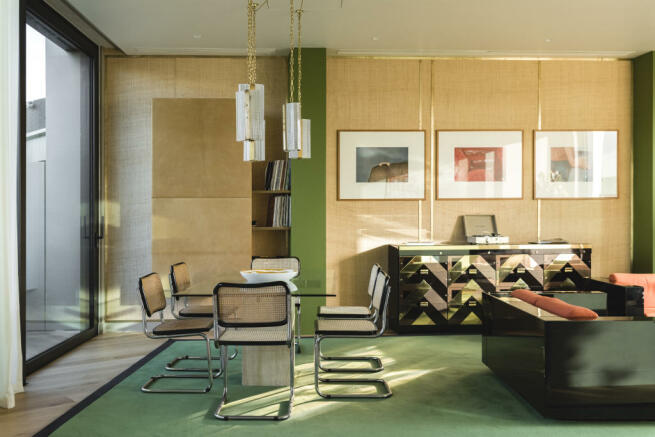 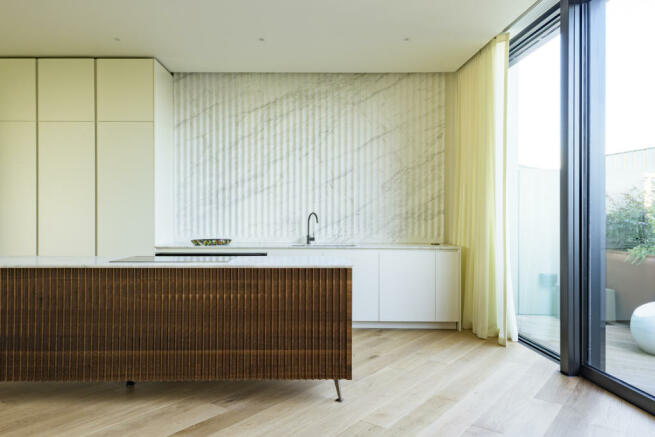 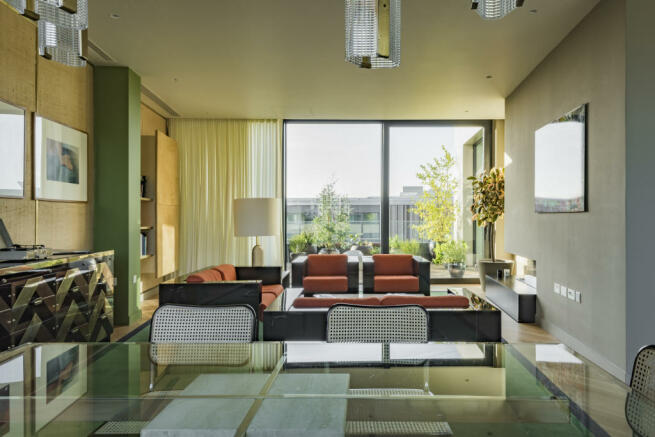 This supremely elegant three-bedroom penthouse apartment, with two terraces, can be found on the seventh and eighth floors of Television Centre’s Helios building. It was built to a design by Piercy&Company, with interiors by designer Bella Freud in collaboration with Maria Speake of Retrouvius.

A landmark piece of modern architecture, Television Centre was the home of the BBC for over fifty years, until its relocation in 2012. At its core is The Helios, a circular Grade-II listed Modernist structure arranged around a central fountain, with a beautiful mosaic-tiled exterior and arresting central staircase visible through soaring glazing. A boundary is formed by the newly added Crescent with private gardens between them.

This particular apartment belongs to the ‘Architects’ Series’, one of eleven duplex spaces in The Helios each individually designed by an architecture practice alongside lead architects AHMM. Five of the premium Architects’ Series have been designed by RIBA award-winning practice Piercy&Co, including this one.

Internal accommodation extends to approximately 2,200 sq ft and is arranged over two levels with entry on the seventh floor. The three bedrooms are all situated on the lower level and have built-in wardrobes, two with en-suite bath / shower rooms the third with use of a central family bathroom.

The upper level is a versatile, open expanse, partially split by a long gas fire, with a utility area, and family room which could be used as a further bedroom. There is access to large terraces at both aspects.

Tactility and a lasting sense of solidity have informed Piercy&Co’s inspiration throughout. In the kitchen this materiality is showcased through a high wall of fluted marble, a form echoed in the walnut of the kitchen island, the bathroom walls, and on the underside of the open-tread oak staircase that joins the two floors. With the exception of the bedrooms, bathrooms and kitchen, flooring is engineered oak punctuated with solid brass thresholds.

Television Centre is at the centre of an exciting regeneration of the area, with the opening of independent restaurants such as Kricket and the new Soho House members’ club, White City House. Also nearby is White City Place, a creative campus with restaurants, shops and museums, and the new home to RCA’s Schools of Communication, Humanities, and Architecture.

Residents of Television Centre enjoy a range of brilliantly executed amenities, including access to the Soho House gym, a private cinema, 24-hour concierge, and an excellent residents’ lounge with work and meeting spaces.

Disclaimer - Property reference TMH70048. The information displayed about this property comprises a property advertisement. Rightmove.co.uk makes no warranty as to the accuracy or completeness of the advertisement or any linked or associated information, and Rightmove has no control over the content. This property advertisement does not constitute property particulars. The information is provided and maintained by The Modern House, London. Please contact the selling agent or developer directly to obtain any information which may be available under the terms of The Energy Performance of Buildings (Certificates and Inspections) (England and Wales) Regulations 2007 or the Home Report if in relation to a residential property in Scotland.