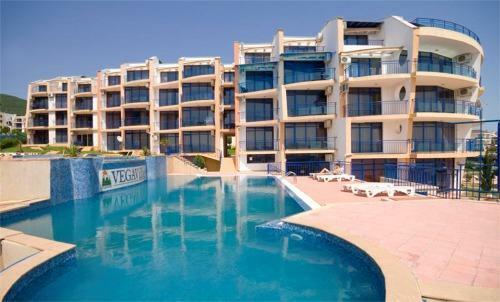 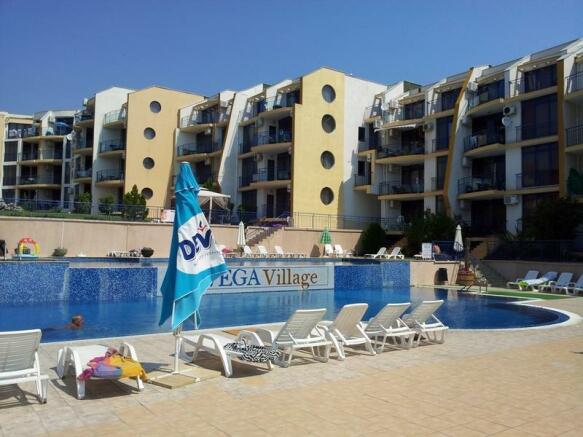 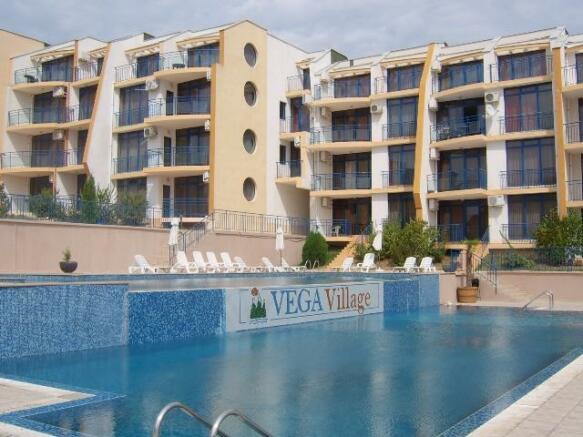 Appreciating Assets are delighted to offer this Third floor, Sea View, Studio apartment in Vega Village for sale at the very reasonable asking price of just £21,500 (�24,950)

This spacious property is located in the heart of the well established Vega Village resort and offers a wonderful sea view from the balcony.

The property is fully furnished and comes with a separate kitchen which really sets it apart from other studio apartments on the market at the present time. The furniture includes bed, large double wardrobe, fully fitted kitchen, TV and stand, dressing table, dining table and chairs.

Vega Village is located in St. Vlas, an attractive sea resort in the southern Bulgarian Riviera, as part of one of its most exclusive and loved areas- Sunny Beach. Stunning scenery, tranquility, comfort, cultural and historical sites and a myriad of entertainment possibilities in close proximity, all combine in this beach front complex to make for a memorable stay.

Vega Village is a comparatively new beach front (first line) complex in operation since 2005. It covers an area of 12 000 square metres comprising of three main buildings with fully furnished to the highest standards one- and two-bedroom apartments. Each apartment is equipped with bedding linen and towels, 21-inch TV with international channels, and a kitchenette with all cooking, coffee-making and eating facilities. The air conditioning in each apartment adds to your comfortable and pleasant stay. The terraces of many of the apartments overlook the spectacular Sunny Beach bay, new and Old Nessebar peninsular. The panorama is majestic, yet serene, and nothing short of breath-taking!

In the area immediately in front of Vega Village is located the most modern five-star Yacht Club/Marina on the Black Sea coast-'Marina Dinevi', as also a beautiful golden sandy beach. This area boasts many extravagant restaurants, cafes and bars.

Vega Village offers a number of amenities: two large outdoor swimming pools, sauna, gym, an open-air kindergarten, bar and restaurant. For the comfort of its visitors, the complex provides a shuttle service to and from Varna and Burgas airports with an own minibus, a parking lot, a 24-hour reception desk and security guard.

The restaurant of Vega Village and its two pool bars are there to satisfy and delight even the most adventurous and demanding gourmands. The buildings sit in a lush sweep of grass, flecked with flower-beds of roses. Vega Village presents an unparalleled opportunity for an exciting summer getaway.


St Vlas is located at the foot of the southern slopes of the Balkan Mountains, in the northern part of Burgas Bay. A settlement was founded at the present place of St Vlas in the 2nd century AD by Thracians and Greeks, then called Larissa. It acquired the name St Vlas in the 14th century after Saint Blaise, a monastery dedicated to whom existed in the region, but was burnt down in the 14th-18th century by consecutive pirate raids. During the Ottoman rule of Bulgaria, it was known as Kücük manastir or simply Manastir ("monastery"), while the name St Vlas became official after 1886. Until 1920 the population of St Vlas was predominantly Greek. After 1920 as a result of the exchange of population between Greece and Bulgaria most of the local Greeks emigrated to Western Thrace (ceded to Greece in 1920) Greece and found their new home in the village of Strymi (until 1920 Chadarli), Sapes municipality. Less than 10 Greek families remained in St Vlas. After 1912 and especially after 1920 tens of Bulgarian families emigrated from Greece, predominantly from Greek Macedonia and established themselves in St Vlas. The settlement became a climatic sea resort in 1963 and a town on 2 February 2006. St Vlas is the only place on the Bulgarian Black Sea coast where the beaches are facing directly south.

We have been very positively featured in many leading UK, Irish and International publications such as The Guardian, The Financial Times, The Sunday Business Post and th

This is a property advertisement provided and maintained by Property Sales Bulgaria, Manchester (reference 2882) and does not constitute property particulars. Whilst we require advertisers to act with best practice and provide accurate information, we can only publish advertisements in good faith and have not verified any claims or statements or inspected any of the properties, locations or opportunities promoted. Rightmove does not own or control and is not responsible for the properties, opportunities, website content, products or services provided or promoted by third parties and makes no warranties or representations as to the accuracy, completeness, legality, performance or suitability of any of the foregoing. We therefore accept no liability arising from any reliance made by any reader or person to whom this information is made available to. You must perform your own research and seek independent professional advice before making any decision to purchase or invest in overseas property.