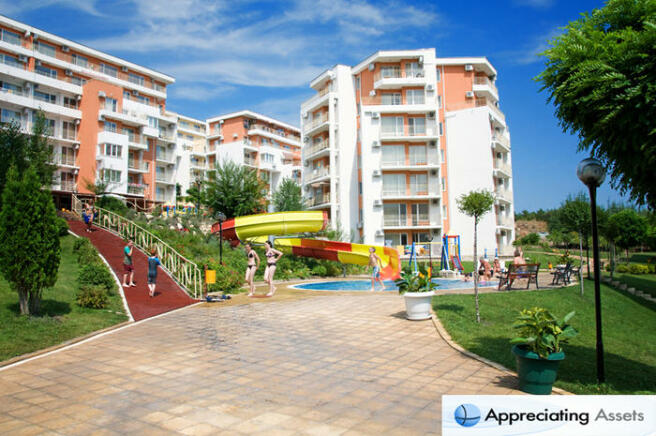 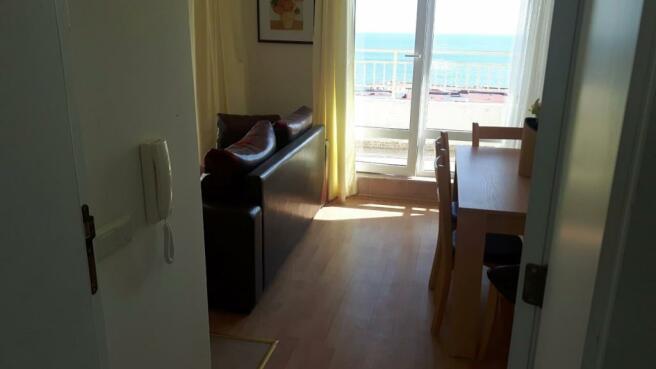 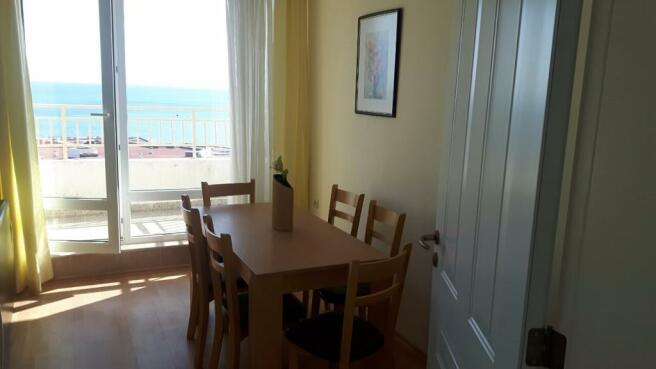 Appreciating Assets are delighted to offer for sale this fully-furnished fifth floor, 2-bedroom apartment with a panoramic sea view at the highly sought after Crown Fort Club development at Sveti Vlas Bulgaria for the keen price of only £45,000

Property Description
This is a large Sea View 2-bedroomed property in the Crown Fort development - part of the Grand Noks holiday resort complex at St. Vlas. A key feature of this particular development is the proximity to the beach and the sea, but also the high-quality nature of the development especially the beautiful swimming pools available at this particular resort. In addition to the large bedrooms, there is a fully-tiled bathroom with shower, a modern fitted kitchen and a lovely open-plan living/dining area, as well as a balcony , with a wonderful sea view. There is laminate wooden flooring throughout and the property is brought to the market fully furnished and in excellent condition.

Crown Fort Club
Crown Fort Club holiday complex is situated in a small exotic bay in Sveti Vlas resort only 200 metres from the sea coast and just minutes away from the excitement of various entertainments and the nightlife of Sunny Beach. Because of its specific location the complex offers the unique combination of sea view in conjunction with the surrounding of fascinating rising green hills. The private golden sand beach, the crystal clear sea and the refreshing coolness of the surrounding forest make Grand Resort an exceptional place for a peaceful family vacation.

St Vlas is located at the foot of the southern slopes of the Balkan Mountains, in the northern part of Burgas Bay. A settlement was founded at the present place of St Vlas in the 2nd century AD by Thracians and Greeks, then called Larissa. It acquired the name St Vlas in the 14th century after Saint Blaise, a monastery dedicated to whom existed in the region, but was burnt down in the 14th-18th century by consecutive pirate raids. During the Ottoman rule of Bulgaria, it was known as Kücük manastir or simply Manastir ("monastery"), while the name St Vlas became official after 1886. Until 1920 the population of St Vlas was predominantly Greek. After 1920 as a result of the exchange of population between Greece and Bulgaria most of the local Greeks emigrated to Western Thrace (ceded to Greece in 1920) Greece and found their new home in the village of Strymi (until 1920 Chadarli), Sapes municipality. Less than 10 Greek families remained in St Vlas. After 1912 and especially after 1920 tens of Bulgarian families emigrated from Greece, predominantly from Greek Macedonia and established themselves in St Vlas. The settlement became a climatic sea resort in 1963 and a town on 2 February 2006. St Vlas is the only place on the Bulgarian Black Sea coast where the beaches are facing directly south.

This is a property advertisement provided and maintained by Appreciating Assets, Bulgarian Property Sales (reference Prop2682) and does not constitute property particulars. Whilst we require advertisers to act with best practice and provide accurate information, we can only publish advertisements in good faith and have not verified any claims or statements or inspected any of the properties, locations or opportunities promoted. Rightmove does not own or control and is not responsible for the properties, opportunities, website content, products or services provided or promoted by third parties and makes no warranties or representations as to the accuracy, completeness, legality, performance or suitability of any of the foregoing. We therefore accept no liability arising from any reliance made by any reader or person to whom this information is made available to. You must perform your own research and seek independent professional advice before making any decision to purchase or invest in overseas property.