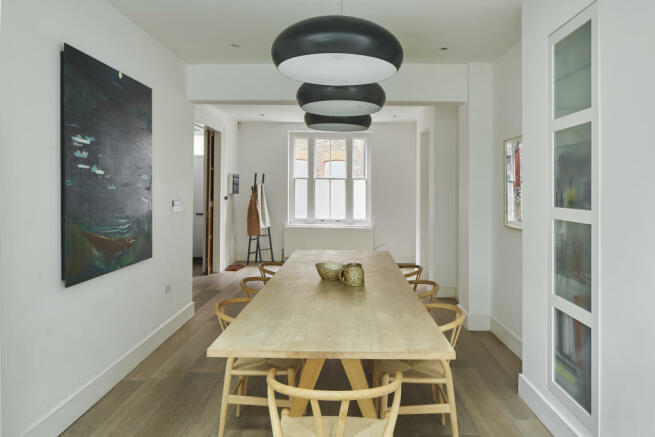 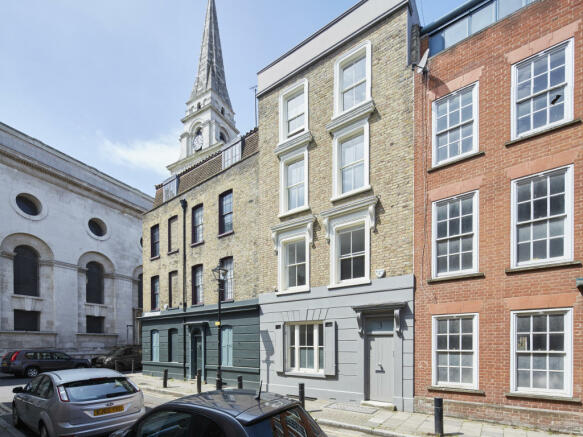 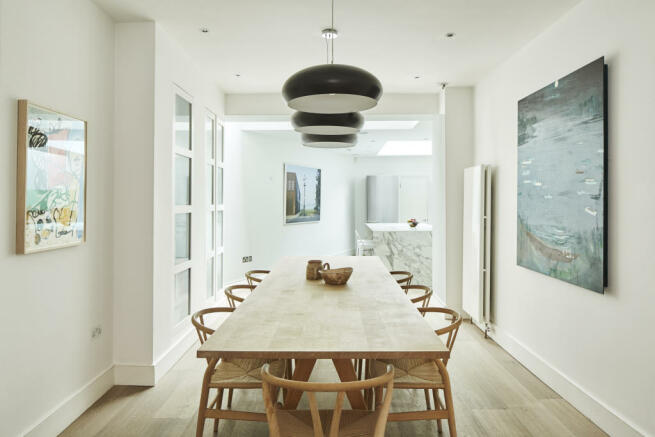 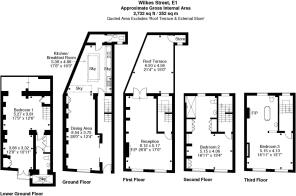 This wonderfully bright period townhouse is a rare offering on one of the most sought-after streets of the Spitalfields Conservation Area. It measures approximately 2,732 sq ft over five floors, with three bedrooms and a large roof terrace, and has been opened completely to provide expansive double-depth rooms on each level.

The house originally dates from the early 18th century, but was remodelled during the Victorian era. As a result, it is not listed by Historic England, which has enabled its transformation into an exemplary modern home.

The ground floor opens to wide corridor and leads left, through reclaimed sliding glazed doors, to a sweeping dining room. Beyond it, is a distinctly contemporary kitchen with a marble island and stainless-steel worktops, all lit from above by large skylights. At the rear, there is a utility room and guest WC.

The main reception room occupies the entirety of the first floor, with French doors to a west-facing roof terrace that has a wonderful view down the run of neighbouring gardens. There are large double bedrooms on each of the upper two floors, both open-plan with en-suite bathrooms.

On the lower-ground level there is a versatile space, used as a guest bedroom and art studio, with a WC and shower room in the old vault.

Wilkes Street belongs to the collection of handsome Huguenot terraces that make up the conservation area surrounding Hawksmoor’s Christ Church in Spitalfields. Following the Edict of Fontainebleau in 1685, France suffered an exodus of Huguenots, many of them skilled craftsmen. A large number settled in London, especially Spitalfields, with its already burdgeoning textile trade, and the area became synonymous with an expertise in the weaving of silk.

The house is within walking distance of the City and the shops, galleries and restaurants of Shoreditch. On its doorstep is Spitalfields Market, and Brick Lane and Columbia Road are both within easy reach. The stations of Liverpool Street (Circle, Metropolitan, Central lines and National Rail), Aldgate East (District and Hammersmith & City lines) and Shoreditch High Street (Overground) are all a short walk away.

Disclaimer - Property reference TMH78035. The information displayed about this property comprises a property advertisement. Rightmove.co.uk makes no warranty as to the accuracy or completeness of the advertisement or any linked or associated information, and Rightmove has no control over the content. This property advertisement does not constitute property particulars. The information is provided and maintained by The Modern House, London. Please contact the selling agent or developer directly to obtain any information which may be available under the terms of The Energy Performance of Buildings (Certificates and Inspections) (England and Wales) Regulations 2007 or the Home Report if in relation to a residential property in Scotland.