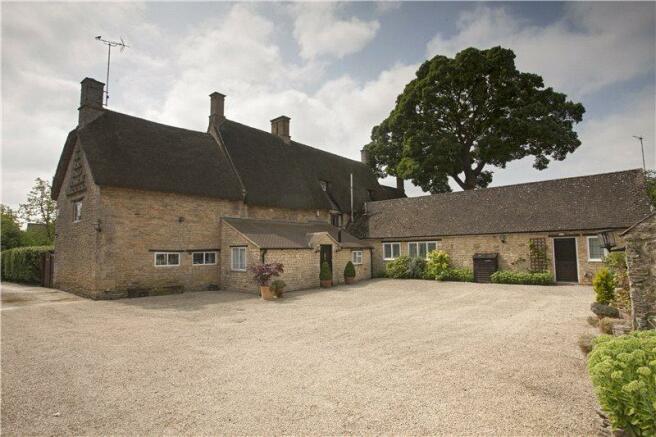 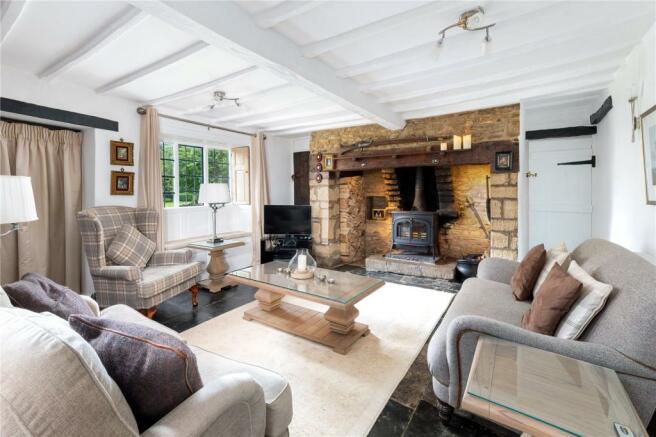 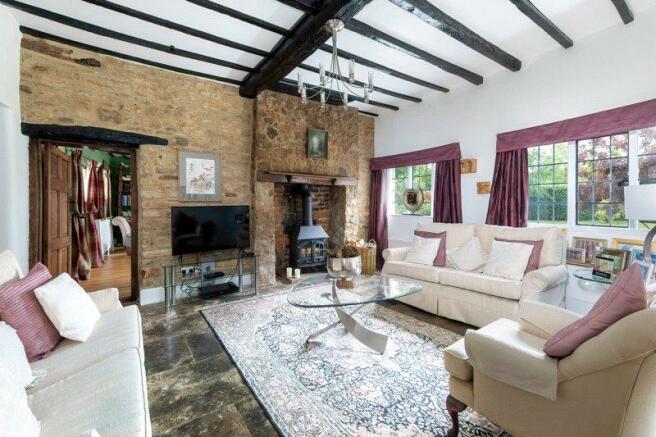 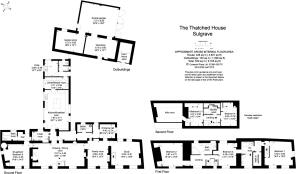 Situated at the edge of the village and backing on to open countryside, The Thatched House has been intrinsically associated to neighbouring Sulgrave Manor since its very construction, recorded as dating to the early 1700’s and being attributed to the builder who worked at the Manor. Until the 1970’s the property was a hotel still owned by Sulgrave Manor.

Of stone construction beneath a mainly thatched, part tile roof, the property is Grade II listed and retains numerous period features including exposed timbers, window seats, window shutters, panelling, flagstones and inglenook fireplace. It has been extensively renovated by the current owners including complete re-thatch in 2006, rewiring and re-plumbing and the installation of wood burners, new bathrooms and impressive family kitchen. Today The Thatched House successfully combines all the character of its past, with modern comforts.

Accommodation over three floors is spacious and versatile. Four reception rooms can be used as formal entertaining spaces as well as snug/gym or bedroom 6 depending on needs. The kitchen breakfast room with Aga Masterchef, integrated appliances and work island is dual aspect has a door to the terrace and gardens and also links with useful service rooms, a large pantry and beyond that a laundry room and WC with rear door to the courtyard.

Outside, extensive outbuildings create an attractive courtyard. There is a wood store, work shop, garden store and beyond that a double garage with electric doors and natural sedum roof. The Thatched House sits centrally on its plot with the drive and parking area to one side, gardens are mainly enclosed with established shrubbery, hedges and tress, including a specimen sycamore tree offering privacy. To the side is a large terrace space accessed from the kitchen which leads to a more open orchard area, itself abutting open fields to the rear.

Sulgrave is a pretty village located between the market towns of Banbury and Brackley about 7.5 miles north east of Banbury. A conservation village its Manor House was once the ancestral home of George Washington, and today the thriving community boasts a village shop/post office, public house and parish church.

The nearby market towns of Banbury and Brackley provide local amenities including supermarkets, schools and banks. Oxford, Northampton and Milton Keynes provide for more extensive leisure, retail and cultural facilities.

Leisure activities in the area include numerous public footpaths and bridleways leading from the village as well as, horseracing at Towcester Racecourse; motor racing at Silverstone; Bicester Village retail park; theatre at Stratford-on-Avon, Oxford and Milton Keynes.

From Banbury / M40 (J11) take the A422 (direction Brackley). At the end of the dual carriageway take the first exit on the roundabout following the B4525. After approx 3 miles turn left following signs to Culworth and Thorpe Mandeville. After passing Thorpe Mandeville take the right-hand turn to Sulgrave. Proceed into the village and just after passing the village shop on the left take the drop left on to Manor Road, follow past the Star Inn pub and The Thatched House is found a bit further along on the left and entered through a private drive into a courtyard at the rear.

Disclaimer - Property reference BAS140206. The information displayed about this property comprises a property advertisement. Rightmove.co.uk makes no warranty as to the accuracy or completeness of the advertisement or any linked or associated information, and Rightmove has no control over the content. This property advertisement does not constitute property particulars. The information is provided and maintained by Savills, Banbury. Please contact the selling agent or developer directly to obtain any information which may be available under the terms of The Energy Performance of Buildings (Certificates and Inspections) (England and Wales) Regulations 2007 or the Home Report if in relation to a residential property in Scotland.